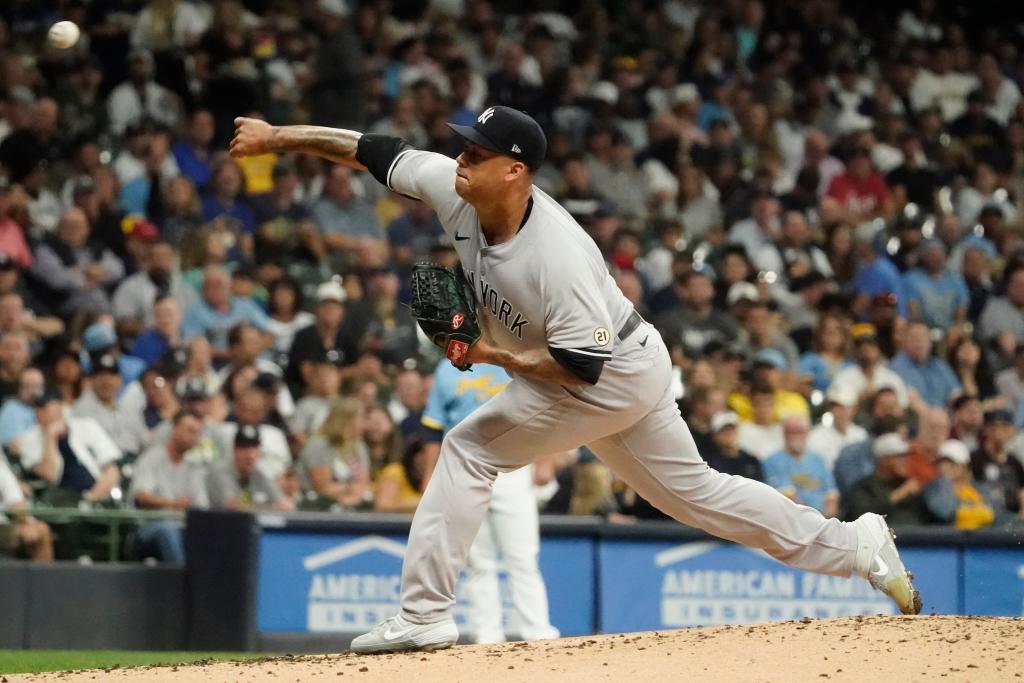 Frankie Montas has yet to resume throwing after going on the injured list with right shoulder inflammation, casting further doubt on his potential availability for the ALDS — at least as a starting pitcher.

Monday will mark the 10th day of a shutdown that was initially expected to be around 10 days, and though manager Aaron Boone said Sunday he did not yet know when Montas would begin to throw again, he hoped the right-hander would be ready for it “in the next few days.”

Still, the calendar is working against Montas’ chances of being part of the Yankees’ playoff rotation at least for the ALDS, which begins on Oct. 11.

“It’s probably getting to a point where it’s going to be tough as a starting, built-up option,” Boone said Sunday before the Yankees’ rain-shortened 2-0 win over the Red Sox in The Bronx. “Especially if, in a few more days we’re at 14 days. Then you start building that back. So that might be a challenge. But I do think there’s a chance that he can have a role and impact us. It’s just a matter of how the next couple weeks go.”

Boone indicated that Montas could be limited to 30-40 pitches in a best-case scenario.

The Yankees are expected to have Gerrit Cole, Nestor Cortes and Luis Severino as their top three starters for a playoff series, with Jameson Taillon and Domingo German likely battling for the fourth spot.

Before landing on the IL retroactive to Sept. 17, Montas had struggled since joining the Yankees in a trade from the Athletics, posting a 6.35 ERA in eight starts.

Aaron Judge got a start at DH on Sunday, with Giancarlo Stanton among the Yankees getting a day off. But Boone remained noncommittal on when Judge, who went 1-for-2 with a double and a walk Sunday, would get his own day off in the midst of his chase for 61 home runs.

“Hopefully, we get to a point where we have a few days to decide on which makes the most sense and how to rest him where we can,” Boone said. “I’m truly going day by day with that right now.”

After the Yankees designated the infielder/outfielder for assignment on Thursday, Andujar was claimed off waivers by the Pirates on Sunday.

Since being the runner-up for the AL Rookie of the Year in 2018, Andujar hit just .228 with a .573 OPS in 105 games. The 27-year-old had a strong season this year in Triple-A Scranton/Wilkes-Barre, but could not replicate it in the big leagues. He figures to get a longer leash to reestablish himself with the rebuilding Pirates.

Boone said it was “possible” that DJ LeMahieu (toe) could return from the IL to play in the Yankees’ three-game series in Toronto that begins Monday, but his status remained up in the air.

Asked if LeMahieu would play before the regular season ends, Boone said, “I think so, and I hope so, yeah.”