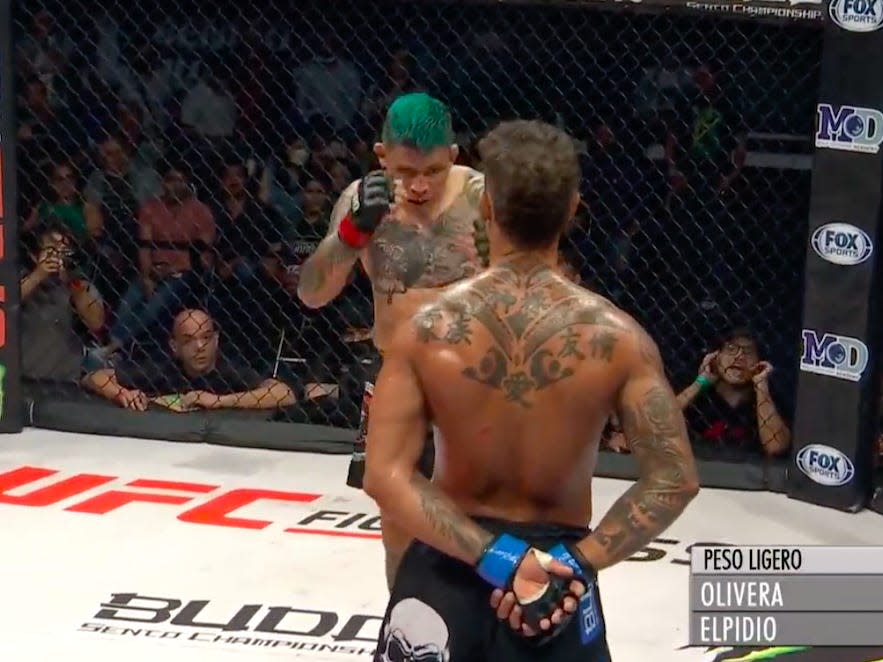 Regional MMA can often produce some of the most extraordinary footage in all combat sports.

Recent weekends have been no different as a featured clip below shows one fighter getting kicked so hard he went flying through the air.

Another athlete began taunting his opponent but regretted his strategy when he got hammered to the floor after showboating.

Elsewhere, a struggling fighter waved off his own match after getting kicked hard to the skull.

The highlights came from a number of fight sports promotions including Legacy Fighting Alliance (LFA), Combate Global, and Octagon League.

Flyweight fighter An Ho sent Matt Barro flying through the air with a brutal head kick.

There is often a misconception in combat sports that athletes in the lighter weight classes cannot match the excitement of bigger fighters like heavyweights.

Well, An Ho is here to prove those people wrong.

The flyweight literally sent his LFA 135 opponent flying into the air with an almighty head kick during their July 8 tussle at the Arizona Federal Theatre in Phoenix.

What’s almost as impressive is that the Vietnamese athlete managed to do that in just his second pro fight, advancing his pro MMA record to a flawless two knockouts from two wins with no defeats.

LFA 135 was a 12-fight card topped by a welterweight main event between Alfonso Leyva and Daniel Reis.

Leyva won in the second round with a technical knockout finish by elbows.

Here are those elbows:

One fighter at an Octagon League show in Kazakhstan withdrew himself from a bout after getting kicked hard in the skull.

Geovane Vargas said enough was enough in the third round of his MMA match against Bekzat Almakhan at an Octagon League show in Almaty, Kazakhstan, that was broadcast July 1 on YouTube.

Almakhan cracked Vargas on the skull with a head kick so devastating it made him rethink why he was in the bout in the first place.

The effect Almakhan’s strike had on Vargas can be clearly seen in the clip below, as Vargas looked dazed, confused, and almost concussed despite — somehow —remaining on his feet.

Almakhan advanced his pro MMA record to 12 wins (10 knockouts and two submissions) against just one loss, after beating Vargas.

Over on Combate Global, “Torito” Ramirez timed an upkick to perfection as he beat Jose Mercado with the move in the very first round.

“Torito” Ramirez turned a vulnerable position into a place of victory as he finished Combate Global opponent Jose Mercado with a strike he threw while his back was on the mat.

The upkick had a devastating effect on Mercado, notching Ramirez with an early finish.

“Like a comet,” Combate Global boss Campbell McLaren tweeted July 8. “You see an upkick KO once every decade and a half.”

It was the very first win of Ramirez’s career — and likely one he’ll remember forever.

Victory advanced Ramirez’s pro MMA record to one win (one knockout) against one defeat, having rebounded from an early setback to Oscar Herrera, last year.

Elsewhere, Olivera quickly found out that taunting Marco Elpidio can quickly backfire. It started off with a Conor McGregor-esque hands-behind-the-back stance …

… moments later, Olivera got clattered to the canvas because of Elpidio’s overhand right.

It wasn’t the only time these fighters were fooling around in the middle of the bout:

And, finally, going full circle back to LFA — Allan Begoso landed what was arguably the best finish of the night with this flying knee.

At the LFA 135 event on July 8, Allan Begosso — a bantamweight MMA fighter from Brazil — returned what is arguably the best knockout of this entire series as he finished Paris Stanford with a first-round flying knee.