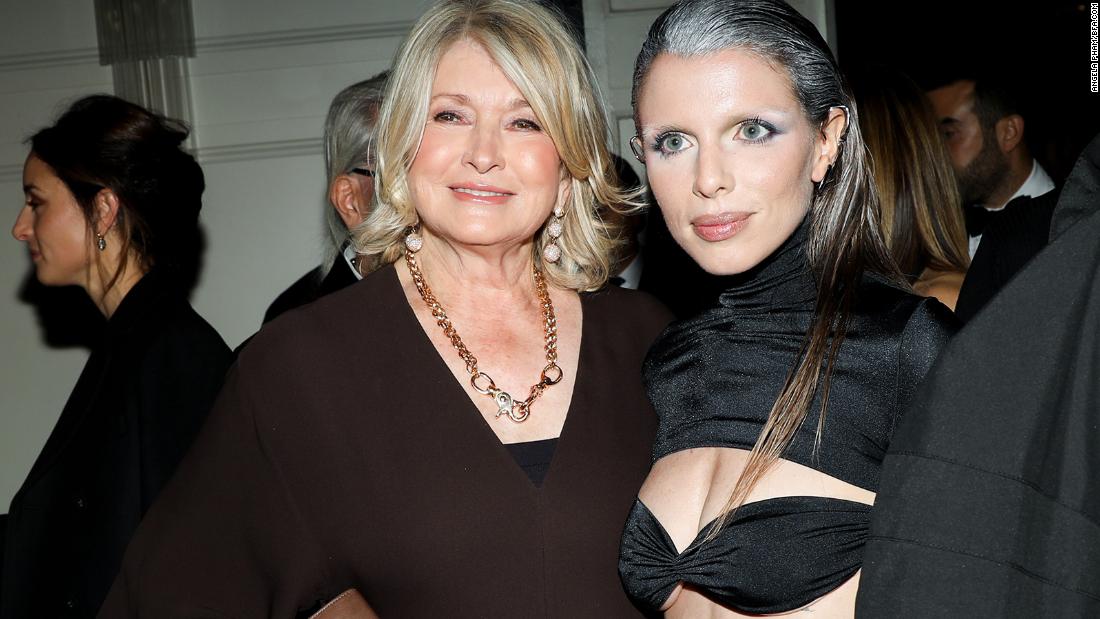 Featuring the good, the bad and the ugly, ‘Look of the Week’ is a regular series dedicated to unpacking the most talked about outfit of the last seven days.

Whether it be carefully-planned coordination or a case of sartorial serendipity, this week’s red carpets offered up a trio of twosomes proving that sometimes your best fashion accessory is the person standing next to you.

On Saturday, musicians Jesse Rutherford and Billie Eilish made their debut as a couple at the LACMA Art+Film gala in Los Angeles, cozily wrapped in a Gucci quilt and matching pajamas; while Natasha Lyonne and Lenny Kravtiz were photographed giving a sultry lesson in leather at the CFDA Awards in New York on Monday. The latter event’s most enduring image came later on in the evening, when Martha Stewart and Julia Fox were snapped together at the ceremony’s dinner. With more than 22,000 likes on a photo of their pairing shared on Twitter, commenters joked that Stewart and Fox made “the dream blunt rotation.“

While these are technically six different looks, the outfits share a common thread: the power of two. It’s hip to be squared.

On November 7, just weeks after paparazzi shots of Rutherford and Eilish together launched much zealous speculation over their romantic relationship, the pair chose to make not just a public confirmation — but a sartorial statement. Their bedroom-inspired red carpet ensemble (complete with an eye mask, slippers and monogrammed blanket) used fashion to mimic and subvert the intimacy fans, and paparazzi, had so desperately been trying to capture.

At the 2022 CFDA Awards a few days later, Lenny Kravitz walked the event’s red carpet ahead of picking up the organization’s “Fashion Icon” award. There, he posed with the show’s host Natasha Lyonne in an inadvertently synchronized leather look. Despite being dressed by different designers — Lyonne in an embossed leather blazer and trouser set from Gabriela Hearst, while Kravitz wore LaQuan Smith black leather slim-fitting pants, a cut-out blazer and black feather boa — the pair embodied the same air of effortless cool with chunky silver accessories, statement sunglasses and voluminous hair. Forget sweater weather, as temperatures cool in the northern hemisphere, they presented an altogether sexier approach to Fall-Winter dressing.

Last but not least, Fox and Stewart reminded us there’s nothing the internet loves more than seeing worlds collide. Their clashing styles at the award show’s dinner — 76-year-old Stewart in a modest brown maxi dress next to 32-year-old Fox, sporting bleached brows, a spray-on gray slick back look and a daring Valerievi cut-out dress revealing her entire torso — were chaos incarnate. While Fox’s CFDA look (which she defined on the night as a “love letter to getting older”) was strong on its own, it appeared even more madcap when contrasted against Stewart. And once social media found the photo, Fox’s ensemble went from fleeting red carpet success to prime meme material likely to be resurfaced over and over. For tens of thousands of people online, Stewart and Fox perfectly encapsulated the visual incongruity of a conservative, middle-class mother and her rebellious teenage daughter.

Even high fashion believes there’s strength in numbers. On Instagram, the couple’s account @young_emperors has built a 286,000-strong following by donning meticulously executed designer ‘his and hers’ outfits. And at Milan Fashion Week in September, Gucci sent 68 pairs of twins down the runway, inspired by the twins in creative director Alessandro Michele’s own family: his mother and aunt. Similarly, at the Sunnei Spring-Summer 2023 show in Milan, twins emerged from the audience to join their identical siblings on the catwalk. Consider this fashion’s official case for plus ones.