Why Republican Insurgents Are Struggling to Topple G.O.P. Governors 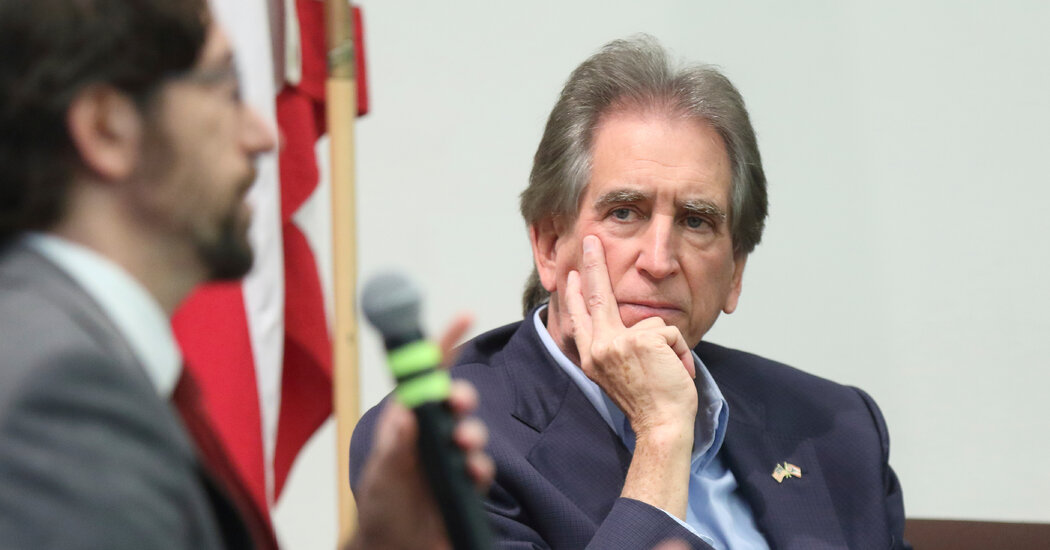 Jim Renacci, an acolyte of Donald J. Trump who is trying to capitalize on outsider energy to oust the Republican governor of Ohio, has found himself outspent, way down in the polls and lamenting his lack of an endorsement from the former president.

He has even given up on raising cash.

“Why waste time trying to raise money when you’re running against an incumbent?” Mr. Renacci said in an interview. “I would rather spend time getting my message out. I just don’t have a finance team.”

Mr. Renacci’s plight ahead of Ohio’s primary election on Tuesday illustrates the challenges in front of Republican candidates who are trying to seize on the party’s divisions to unseat G.O.P. governors. Some have been endorsed by Mr. Trump as part of his quest to dominate Republican primaries, while others, like Mr. Renacci, have not received the coveted nod but are hoping to take advantage of Trump supporters’ anti-establishment fervor.

But in every case, these candidates have failed to gain traction.

Trump-inspired and Trump-endorsed candidates for governor have put up spirited opposition in May primaries across five states, but they are facing strong headwinds. In addition to Ohio, where Gov. Mike DeWine holds a polling lead of nearly 20 percentage points over Mr. Renacci, Republican governors in Alabama, Georgia and Idaho are so far holding off Trump-wing candidates. In Nebraska, a candidate backed by Mr. Trump is locked in a three-way contest for an open seat with the governor’s choice and a relative moderate.

In all of the races, governors from the traditional Republican establishment are showing their strength. Their resilience stems, in some cases, from voters’ desire for more moderation in their state executives than in their members of Congress. But it is also clear evidence of the enduring power of incumbency, even in a party at war with its establishment.

Incumbent governors have a plethora of advantages that don’t apply to members of Congress. They often control the infrastructure of their state party, they can drive the local news media and they can campaign on specific policy achievements.

And it is difficult to knock them off: Only three Republican governors have been denied renomination this century, in Kansas in 2018, Nevada in 2010 and Alaska in 2006. Scandals or political upheaval were major factors in each upset.

“As an incumbent governor, you have to work really hard to lose your party’s nomination,” said Phil Cox, a former executive director of the Republican Governors Association who advises a number of governors. “Even if you’re an unpopular governor with the broader electorate, it should be relatively easy to build and maintain a strong base of support among your own party.”

The Republican Governors Association is backing its incumbents, spending more than $3 million in Ohio to help Mr. DeWine, who angered the conservative base with his aggressive Covid mitigation policies, and more than $5 million in Georgia to help Gov. Brian Kemp, whom Mr. Trump blames for not helping him overturn the 2020 election.

In some states, Republican governors have moved to the right to fend off challengers.

Gov. Greg Abbott of Texas did so successfully in March, and Gov. Kay Ivey of Alabama has followed his model ahead of her primary next month, falsely claiming in television ads that the 2020 election was stolen and warning that unchecked immigration will force Americans to speak Spanish. Ms. Ivey holds a big lead over her challengers on the right, but Alabama law requires a majority of the primary vote to avoid a runoff.

For Mr. Trump, who regularly boasts of his approval rating among Republican voters and his endorsement record in primaries, the prospect of losing primaries — especially in Georgia, where he has for more than a year attacked Mr. Kemp — would be an embarrassing setback.

In Idaho, Lt. Gov. Janice McGeachin, who has been endorsed by Mr. Trump in her bid for governor, trails well behind Gov. Brad Little. And in Nebraska, Mr. Trump endorsed Charles W. Herbster, a wealthy agribusiness executive who was accused this month by a state senator of groping her at a political event.

Advisers to Mr. Trump predict that he will simply dismiss any losses and instead highlight the races his candidates have won, as has generally been his practice. For instance, he withdrew his endorsement of Representative Mo Brooks in Alabama’s Senate race when it became clear Mr. Brooks’s campaign was sputtering.

“Remember, you know, my record is unblemished,” Mr. Trump said in an interview with The New York Times on Thursday. “The real story should be on the endorsements — not the David Perdue one — and, by the way, no race is over.”

Mr. Trump is far from undefeated in primaries. Last year in a special election in Texas, he backed Susan Wright, whose husband, Ron Wright, represented a Dallas-area district before dying of Covid, when she lost a Republican primary to Jake Ellzey. He was also on the losing end of a North Carolina primary in 2020 won by Representative Madison Cawthorn and an Alabama Senate primary in 2017 in which Roy S. Moore defeated Senator Luther Strange.

In governor’s primaries, Trump-backed insurgents have struggled against incumbents for various reasons. The races in which he has appeared able to lift candidates tend to be primaries for open Senate seats, most notably J.D. Vance’s bid in Ohio.

In Idaho, Ms. McGeachin attracted attention from the Republican base last year when, while Mr. Little was traveling out of state, she issued executive orders banning mask mandates (which did not exist on a statewide level) and prohibiting companies from requiring vaccinations, and also tried to deploy the Idaho National Guard to the Mexican border. Mr. Little reversed those moves upon his return.

“She is brave and not afraid to stand up for the issues that matter most to the people of Idaho,” Mr. Trump said when he endorsed Ms. McGeachin in November.

There is virtually no public polling of the race, but C.L. Otter, a former Idaho governor known as Butch, said private polling showed Mr. Little, whom Mr. Otter has endorsed, holding a two-to-one lead over Ms. McGeachin.

Ms. McGeachin has raised just $646,000, according to campaign finance data from the Idaho secretary of state’s office. Mr. Little has raised nearly three times as much — $1.94 million. Her aides did not immediately respond to an interview request.

“I kind of shy away from people who spend more time looking for the headlines than they do doing the right thing,” Mr. Otter said, cautioning, “A sincere renegade always has an opportunity in a Republican primary.”

In Nebraska, Mr. Herbster, who served as an agriculture adviser to Mr. Trump’s campaigns, has denied the groping allegations and has filed a lawsuit against the state senator. She subsequently countersued him. Mr. Trump is holding a rally on Friday night in Nebraska with Mr. Herbster, who this week began airing television ads comparing himself to Justices Clarence Thomas and Brett M. Kavanaugh.

Mr. Herbster, like Mr. Renacci, is self-funding his campaign but has struggled to translate Mr. Trump’s endorsement into a polling advantage over Jim Pillen, a University of Nebraska regent who is backed by Gov. Pete Ricketts, and Brett Lindstrom, a state senator who has consolidated support from the moderate wing of the party and even some Democrats — nearly 2,000 of whom have changed their party affiliation in advance of the May 10 primary. Mr. Herbster’s campaign did not respond to a request for comment.

Sam Fischer, a longtime Republican operative in the state who once worked for Mr. Herbster, said that the western part of the state was “way Trumpier, but right now in Lincoln and Omaha, Herbster is behind.”

And in Ohio, Mr. Renacci, a businessman who has owned car dealerships and nursing homes, has been outspent nearly three to one by Mr. DeWine on television ads, according to AdImpact, a media tracking firm. A third candidate, Joe Blystone, who owns a farming business, has spent nothing on television but is running nearly even with Mr. Renacci in public polling, well behind Mr. DeWine, who declined to be interviewed.

Mr. Renacci, a former small-town mayor who entered Congress in the 2010 Tea Party wave, has never been a voracious fund-raiser. He cycled through a series of campaign managers and finance aides in 2018, when Mr. Trump persuaded him to drop a run for governor and instead challenge Senator Sherrod Brown, a Democrat.

In that race, Mr. Renacci often used an app called Slydial, which bypasses direct phone calls by sending messages straight to people’s voice mail boxes, to send dozens of solicitations at once to prospective donors, according to two people who worked for his campaign who insisted on anonymity for fear of career repercussions. It was an unusual tactic to reach potential contributors who often prefer a personal touch before opening their wallets.

Mr. Renacci lost to Mr. Brown by 6.8 percentage points after the Democrat more than doubled his rival’s campaign spending.

At a rally for Mr. Trump last weekend in Ohio, Mr. Blystone’s supporters often quoted from the candidate’s campaign ads, praising his commitment to God, guns and family.

“He’s not a politician, he is a farmer, and as small as our town is, he has been at the bars just visiting people,” said Tiffany Dingus, 39, an attendee.

Mr. Renacci said his major problem in the race was the presence of Mr. Blystone, whom he said Mr. Trump had cited in a conversation last month as his reason for not endorsing Mr. Renacci.

“This race would be over for Mike DeWine if there were only two people in the race,” Mr. Renacci said. “The president did say, he didn’t know the guy’s name, but he just said, ‘There’s a third guy in there that’s taking votes away from you.’”