Why Ramadan Generates Millions in Charitable Giving Every Year 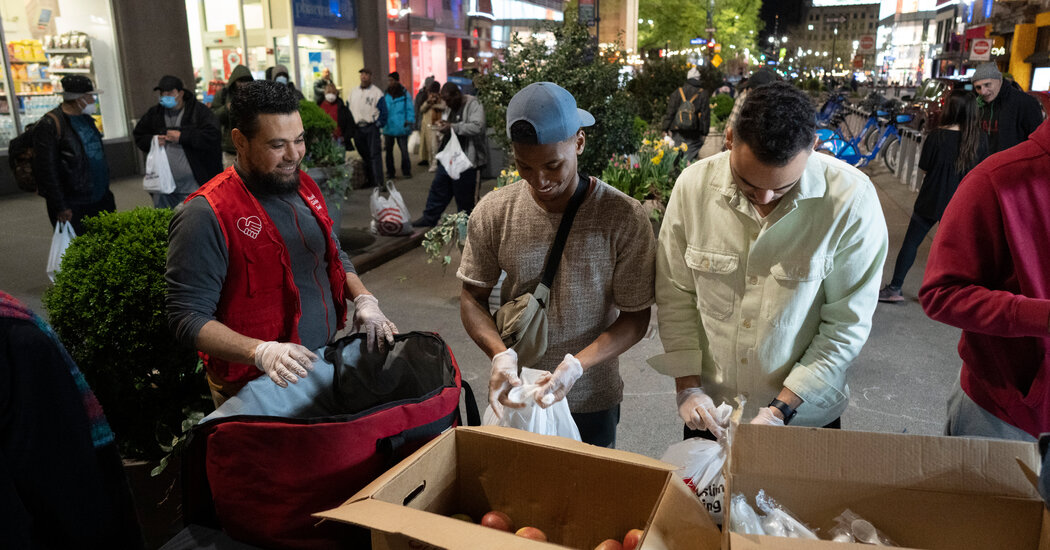 Muhammad Harby fasts from sunrise to sunset during the holy month of Ramadan. Then, after he breaks his fast, he heads from Brooklyn to Midtown Manhattan every day for a late night appointment with hundreds of homeless New Yorkers who rely on him and other Muslim volunteers for a hot meal.

They pass out chicken and rice, vegetables and fresh fruit from a food truck run by Muslims Giving Back, a charity based in Sunset Park, Brooklyn, whose activities — and coffers — swell during Ramadan, when Islamic teachings urge Muslims to donate to charity and do good works for the neediest around them.

For Mr. Harby, a kung fu teacher who came to the United States in 1995, there is no better place to celebrate Ramadan than New York.

“Believe it or not, I love Ramadan in New York City more than Egypt,” he said. “Back home, I would be so much with my friends and family, being invited here and there, and not focusing on worship and things like that. Here it is easy to focus on prayer and helping people.”

Prayer and helping people are theologically central to Islam. While non-Muslims may best know Ramadan as a month of fasting, it is also a time of year that sees a surge in charitable giving, both in New York and around the world.

In New York, millions of dollars change hands each Ramadan. The city is home to almost 800,000 Muslims, making up nine percent of its population and 22 percent of the total Muslim population of the United States, according to the Institute for Social Policy and Understanding, which studies American Muslims.

Muslim New Yorkers are a diverse community whose members have roots in dozens of countries and range from white collar professionals to low-wage laborers. Many share little beside their religion, which is the city’s third largest, after Christianity and Judaism.

The Celebration of Ramadan

The Muslim monthlong holiday of Ramadan, a time of prayer, fasting and feasting, began in the United States on April 2.

The faith is based on the Five Pillars of Islam, a collection of foundational beliefs and practices that include a belief in God and his final prophet, Mohamed; prayer; fasting during Ramadan; making the pilgrimage to Mecca; and charitable giving, or zakat.

Islam calls on Muslims to set aside 2.5 percent of their accumulated wealth each year for zakat, said Khalid Latif, the executive director of the Islamic Center at New York University. It is based on a religious understanding that a person’s good fortune depends upon, and is owed to, the community around them.

Doing good deeds or giving zakat during Ramadan is considered especially holy, particularly during the month’s final 10 days, when Muslims believe God revealed the text of the Quran to the prophet Mohamed.

Muslim New Yorkers donated more than $608 million to charity in 2016, with Muslim households on average donating 33 percent more than non-Muslim households in the United States, according to a 2018 report by the Institute for Social Policy and Understanding.

“Muslims are taught that our wealth is a test: we may be stewards of that wealth but it belongs to God, and we are being tested as to how responsible and ethical we are,” said Dalia Mogahed, the research director for the institute.

Ismail Ocasio, the executive director of Muslims Giving Back, said his group draws in between 50 and 75 percent of its annual operating budget of $200,000 during the four weeks of Ramadan.

During the holy month, which concludes this year on May 1, the group feeds 250 people in Brooklyn each day, then drives its mobile soup kitchen to Herald Square to feed roughly 150 homeless people at 11 p.m. Muslims Giving Back also holds events like blood drives throughout the year. Since it was founded in 2012, it has expanded its operations to Dallas and Houston.

“Ramadan is like a marathon,” said Mr. Ocasio. “We start the month with no way to pay for all of this, but the community always comes together to sponsor us so we can go out and feed the people.”

This year, it has raised over $600,000 in humanitarian assistance for Afghanistan.

“Ramadan wants to instill in people a different sense of awareness and consciousness,” said Mr. Latif. “How we are all connected to each other, and how we all depend on each other. Your relationship to others in the community is heavily stressed in Islam.”

The Zakat Fund of New York City is an organization founded in 2019 to collect and distribute charitable donations to needy families and groups in the New York area, said Nadia Khan, a board member who reviews applications for assistance. She said donors and applicants both hear about the fund through word of mouth.

The Zakat Fund has raised an estimated $2.5 million in the last three years from roughly 25,000 donors and distributed it to 1,600 families in need across the city, said Nazar Khan, a board member.

It has also donated more than $200,000 to local organizations, including the Bronx Defenders, the Violence Intervention Program, and the Food Bank for NYC. Their desire to keep their assistance local is based on Islamic teaching that “you should try to give zakat by hand,” said Mr. Khan.

“We are under no illusion that a $1,500 check can solve every problem that exists,” he said. “But the idea is that zakat is the minimum obligation you have and once you start to give you can determine what else needs to be done for your community.”

Not all good deeds come in the form of a check.

At Al Amin Mosque in Astoria, Queens, the nightly sunset meal, called iftar, is provided free to anyone who wants it. Members take turns paying for the nightly feast, which is served in the mosque basement to as many as 100 people on weeknights and over 200 on weekends.

“I will always help people who need food and security because I have struggled with that in my life,” said Mohamed Jabed Uddin, the general secretary of the Astoria Welfare Society, as he scooped biryani onto plastic plates in the mosque basement while volunteering at a recent iftar.

His desire to help the poor is driven by his memories of washing dishes at a Greek restaurant in Jamaica, Queens, after he moved to the United States alone at age 14. “When I remembered the ’80s and ’90s, tears come to my eyes.”

Back in Herald Square, Taiyyab Zaman passed out dinner close to midnight on a recent Friday with his two children, Jannah, 5, and Musa, 3.

On weeknights, he travels in from Edison, N.J., to drive the food truck to Herald Square. But sometimes he brings his children because “I want them to grow up knowing what service is.”