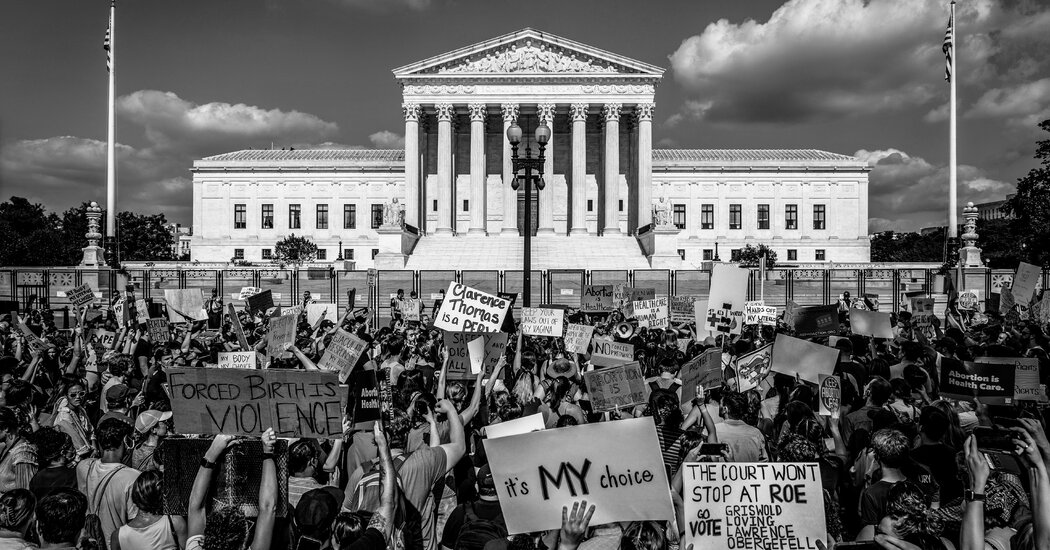 While laying waste to 50 years of abortion jurisprudence, the Supreme Court — or at least four of the five members of the new hard-right majority — took pains to reassure the country that it had executed an isolated hit on an “egregiously wrong” precedent that would not reverberate in other areas of constitutional law.

But the court will not fully control whether and when it will have to confront demands for similar breathtaking changes. In fact, the justices’ agenda will be driven primarily by the political ferment in red states that are racing to capitalize on one of the most conservative bloc of five justices in at least 100 years.

And that in turn means that overturning Roe v. Wade will not take the issue of abortion out of the courts but rather intensify the battle there. Dobbs v. Jackson Women’s Health Organization will let loose a whirlwind of red-state lawmaking that will blow to the court’s door in the coming years, as will other constitutional cases of the sort the court tried to bracket off in Dobbs.

Consider the Dobbs case itself. It was the prospect of a receptive conservative majority that surely motivated the enactment of the 2018 Mississippi law banning nearly all abortions after 15 weeks. That statute was flatly unconstitutional under controlling Supreme Court doctrine, but the Mississippi Legislature figured correctly that its defiant action would get a warm reception from the conservative bloc.

Other states were emboldened and passed patently unconstitutional anti-abortion statutes — most notoriously, the “detection of heartbeat” provision in Texas, which incorporated an enforcement scheme encouraging private citizens to sue anyone who helps a resident procure an illegal abortion.

These red-state forays catalyzed the court’s decision reversing Roe, which in turn has accelerated the race among conservative state legislatures to pass draconian abortion restrictions. Justice Brett Kavanaugh filed a concurring opinion in the Dobbs case insisting that the ruling did not necessarily empower anti-abortion states to forbid or even criminalize attempts by their citizens to procure abortions in neighboring states or assist others in doing so. But his assurances were unpersuasive, if not disingenuous.

There is no sign that red-state lawmakers are in any mood to slow down. In Oklahoma, for example, an abortion ban that takes effect from the moment of fertilization became law. The state’s attorney general, John O’Connor, promised immediate enforcement, including against those who “solicited” abortions, and said his targets could include private companies that facilitate abortions for employees. This hard-line stance dovetails with campaigns in other states to enact laws adopting the Texas strategy of enabling private citizens to sue anyone who helps a resident procure an abortion anywhere that would be unlawful in the home state.

These attempts to punish out-of-state abortions inevitably will provoke lawsuits, one or more of which will make its way to the Supreme Court. The justices may duck the issue once or even twice, but eventually they will have to re-enter the fray to address whether the Constitution forbids a state from regulating across state lines in this fashion. The court’s established jurisprudence, combined with the core holding in Dobbs that women lack a constitutionally protected abortion right, leaves it doubtful, notwithstanding Justice Kavanaugh’s concurrence, that the court would find that the Constitution enshrines a right to travel for reproductive health reasons.

Dobbs similarly provokes a range of other questions that Republican state legislators likely will force the Supreme Court to confront: Can states validly declare that life begins at conception? Can they criminally prosecute women who seek an abortion procedure? Can women be denied access to abortion in cases of rape or incest?

It’s clear, in other words, that Justice Samuel Alito’s claim in the main Dobbs opinion that overturning Roe would remove the court from the abortion arena is a vain hope. The same state-level dynamic on abortion may destabilize protections the court has extended to certain other rights not unenumerated in the Constitution, including those related to same-sex marriage and even contraception. On this point, both Justices Alito and Kavanaugh offered unconvincing reassurances, while Justice Clarence Thomas concurred separately to invite challenges to precedents based on “substantive due process” rights not found in the text of the Constitution.

Despite the Supreme Court’s ruling in 2015 in Obergefell v. Hodges that same-sex couples enjoy a constitutional right to marry, 35 states still have statutes or state constitutional amendments (or both) on the books that ban such marriages. In the wake of Dobbs, it’s likely that one or more states will reactivate a same-sex marriage ban or decline to issue a license to a same-sex couple. Litigation will ensue, culminating in a Supreme Court clash forcing the hard-right majority either to embrace Justice Thomas’s blunt forecast that Dobbs foreshadows a reversal of Obergefell or somehow split hairs over different varieties of unenumerated rights. The same approach could jumpstart state attempts to revive criminal bans on contraception and consensual gay sex.

Suddenly, right-wing impulses to push back against freedoms supported by large majorities of Americans seem plausible. Red-state prosecutors who until last month wouldn’t have dreamed of putting people in prison for seeking abortions or engaging in private sexual relations now will face political pressure to reverse field.

In its joint dissent in Dobbs, the court’s three-member liberal wing wrote, “Either the mass of the majority’s opinion is hypocrisy, or additional constitutional rights are under threat. It is one or the other.” Actually, it’s worse than that. It’s both.