Why Did DeSantis Revoke Disney’s Special Tax Status? What We Know. 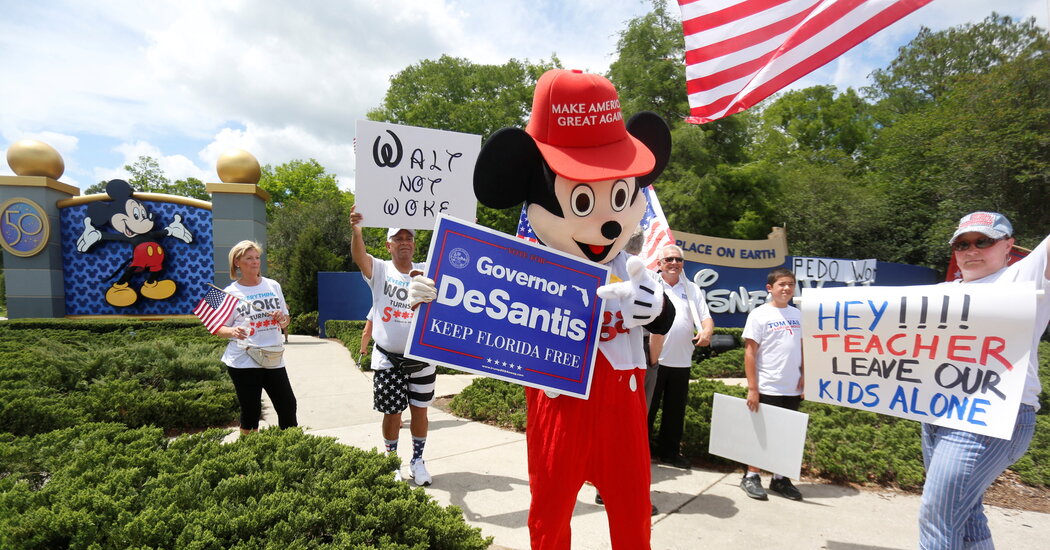 Gov. Ron DeSantis of Florida and state lawmakers have revoked a 55-year-old arrangement that gave Disney a special tax status and allowed it to essentially self-govern its 25,000-acre Disney World complex. The loss of that designation is the latest development in an ongoing battle between Mr. DeSantis and the state’s largest private employer over a recently passed education bill. How did the rift get to that point? Here is some background.

What Are Mr. DeSantis and Disney Fighting Over?

In March, the governor signed a bill that prohibits classroom instruction and discussion about sexual orientation and gender identity in certain elementary school classrooms.

The “Parental Rights in Education” law, often referred to by critics as the “Don’t Say Gay” bill, has led to debate around the nation over the impact that law and others like it could have on schoolchildren. The Florida law could also change how counseling and other mental health services operate in schools.

The legislation has been heralded by conservatives and scorned by L.G.B.T.Q. activists and many schoolteachers. Although initially silent, Disney joined the debate when its chief executive, Bob Chapek, made several remarks criticizing the bill.

Republican lawmakers in the state, including Mr. DeSantis, a potential Republican candidate for president in 2024, were not happy with Disney’s response. “If Disney wants to pick a fight, they chose the wrong guy,” Mr. DeSantis wrote in a fund-raising email to supporters.

What Are Conservatives Saying About Disney?

In response to Disney’s denouncement of the education legislation, Mr. DeSantis and Fox News hosts began to decry what they call “Woke Disney” politics.

It was not the first time the corporation had been accused of adopting stances that conservatives deemed went too far. Within the past few years, Disney has made several changes to its theme parks and streaming services that have drawn their criticism.

This includes a “retheming” of Splash Mountain to disassociate its connection to the inspiration of the ride, the 1946 film “Song of the South,” in which a former slave tells African folk tales. Disney’s streaming service also pulled the film from its collection.

Disney World also revamped its Pirates of the Caribbean ride by removing a scene depicting pirates selling women in an auction. Disney also recently removed the “Ladies and gentlemen, boys and girls” greeting from some of its fireworks shows to be more inclusive.

The dispute between Disney and Florida lawmakers is indicative of the mounting pressure corporations face to get involved in partisan battles.

Disney World’s previously held special status, which began in 1967, let the megaresort essentially function as its own municipal government. Although the theme park is sandwiched between two counties, it operated as a special zone — known as the Reedy Creek Improvement District.

Such a designation meant that the theme park could make its own decisions on the planning and permitting process for construction on its property, levy taxes to pay for its own fire-and-medical-response services and even generate some of its own electricity. Through that status, the company saved millions of dollars annually in fees and taxes, according to experts.

Disney leveraged the benefits of that designation to build out its resort, which today includes multiple theme parks, hotels and a massive bus fleet.

With its special status revoked, the resort, which employs roughly 80,000 people, now must negotiate with the governments in Orange and Osceola counties over using its services. The change could also leave its residents with higher taxes, with some experts estimating up to a 20 percent hike.

How Has Disney Responded to Losing Its Self-Governing Privileges?

Thus far, Disney has not responded to the loss of its special designation.

But several leaders from other states have responded to the news and have invited the company to move Disney World there instead.

Gov. Jared Polis of Colorado said that lawmakers in his state “don’t meddle in affairs of companies.” A county judge in Fort Bend County, Texas, said that Disney could “visit Fort Bend County as your next destination while you face attacks from the modern day political extremists” like the Florida governor.

What Disney will do is not clear. It could apply to re-establish the special designation. The company could also instead reduce its future investment in the resort’s expansion.