White House officials had a special trick they used to keep a straight face during Trump’s press conferences, Dr. Birx writes in her tell-all memoir 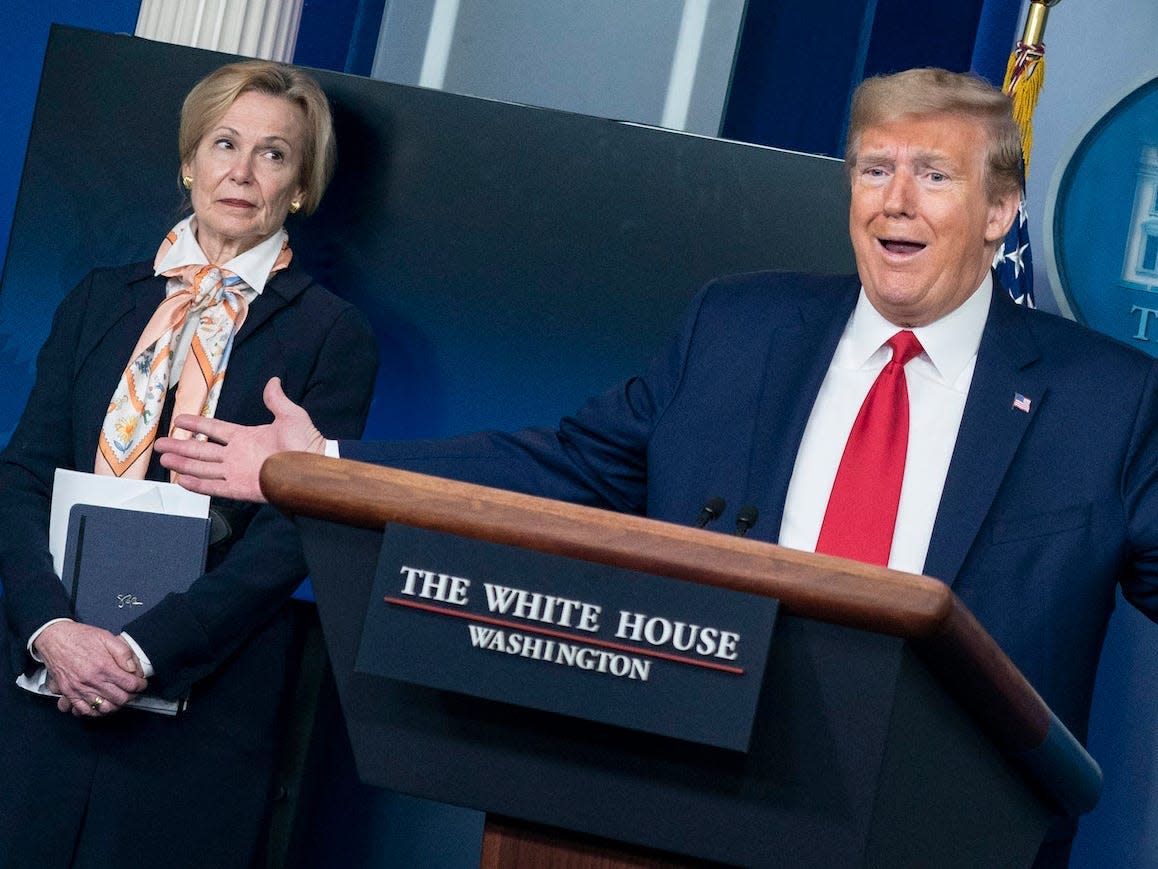 Former White House Coronavirus Response Coordinator Deborah Birx came away from her time in the Trump administration with many lessons learned, including a tip on how to stay composed on-camera.

Recalling former President Donald Trump’s infamous press conference where he suggested injecting disinfectant as a treatment for COVID-19, Birx wanted “the floor to open up and swallow me whole,” she writes in her new book.

Birx goes into extensive detail about her reaction to the comments in her new book, “Silent Invasion: The Untold Story of the Trump Administration, COVID, and Preventing COVID Before It’s Too Late.”

After describing what was racing through her mind as Trump talked about “supposing we hit the body” with “light” and disinfectant “by injection inside,” Birx recounts immediately becoming aware of how her facial expressions and body language would reverberate among the public.

Despite trying to slow her breath and “control my body’s reactions” to Trump’s soon-to-be viral riff, Birx says she could only look at the floor “knowing my face would betray me.”

When Trump turned to her after he was done speaking, she said only, “Not as a treatment” and then put the conversation back on track.

Birx later learned where Trump had gotten mixed up. The White House Task Force discussed ways children could go outside and play, saying that sunlight would work as a disinfectant on playground surfaces.

Trump then talked to Homeland security official William Bryan separately about the potential importance of sunlight in outdoor surfaces, and when Trump asked whether it worked on people as a treatment, Bryan politely said he’d ask.

Birx wrote more generally about how she and other staff were keenly aware about how their facial expressions might come across at any press conferences.

“When statements were made by, or questions asked of, the president, I had to figure out how to look serious and not react to what was said, no matter my inner feelings,” Birx writes.

“I asked my colleagues how they were able to stand and keep their facial expressions so unmoving. They told me to focus on a distant point at the back of the room while still paying attention.”

The HIV/AIDS expert also still grapples with what she could have done differently when Trump turned to her during his tangent on disinfectant.

“To say that I was caught completely off-guard by the absurdity of what was being said in that room that day is an explanation, but not an excuse,” Birx writes.

“Yes. I should have done better,” she continues. “I should have said ‘Not a treatment’ more forcefully, several times over. I should have ignored my deeply ingrained, military-honed instinct not to publicly correct a superior … Instead, in that moment, I thought, ‘Correct what needs to be corrected and move this along.'”