What These Dazzling James Webb Telescope Images Mean for Space 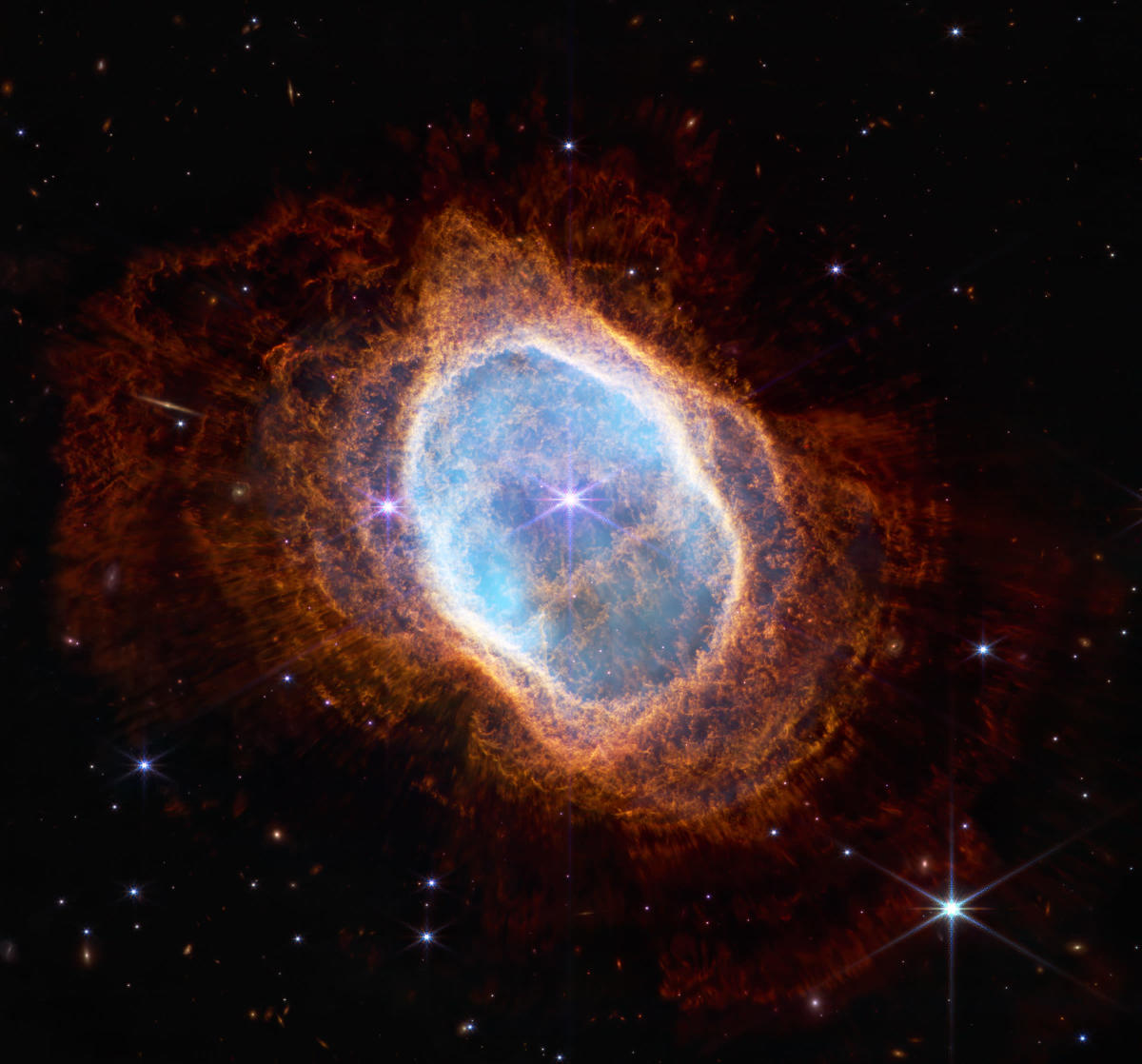 A planetary nebula, seen by the Webb telescope’s NIRCam instrument, against the blackness of space, with points of starlight behind it. Credit – NASA, ESA, CSA, STScI

The NASA scientists behind the James Webb Space Telescope have spent the better part of the past 26 years pleading for three things: patience, time and, in no small measure, money. It was in 1996 that a committee of astronomers working with the space agency first proposed a next-generation space telescope that would be capable of peering 13.6 billion light years away—detecting infrared light that has been traveling to us since just 200 million years after the Big Bang. The telescope, they promised, would be ready to launch by 2007 and would carry a price tag of just $500 million—cheap, as these things go.

It didn’t work out that way. That forecast 2007 launch didn’t happen until Christmas Day 2021, and as for that $500 million cost? That ballooned to $10 billion. But the astronomers’ promise remained the same: the images the new telescope revealed would be spectacular.

This morning, that promise was kept. In a media briefing at the Goddard Space Flight Center in Greenbelt, Md., NASA unveiled four new images captured by Webb that, by any measure, are flat-out dazzling: nebulae and galactic clusters, and a giant, never-before-seen exoplanet. That’s in addition to a gobsmacking picture of a galactic cluster known as SMACS 0723—a swarm of thousands of galaxies, including the most distant ones ever observed in the infrared spectrum—revealed at a White House press conference yesterday by NASA Administrator Bill Nelson, with President Joe Biden and Vice President Kamala Harris in attendance.

“These images are going to remind the world that America is capable of great things,” Biden said. “There is nothing beyond our possibilities.” The Webb telescope, he added, “symbolizes the relentless spirit of American ingenuity.”

The image unveiled yesterday and the other four pictures NASA is revealing today are of objects that most people outside of the astronomy community have never heard of before, but that will now attain a new place in cosmic history. They are, in addition to SMACS 0723:

It is in some ways, the smallest object the telescope imaged—the exoplanet WASP-96b—that will likely cause the greatest excitement. Until now, exoplanets, or planets circling other stars, were detectable in only one of two ways: The transit method, in which astronomers discern the small dimming of light in a parent star as an orbiting planet passes in front of it; and the radial velocity method—in which they look for the small wobble in the position of the star as the gravity of the orbiting planet tugs on it.

What astronomers could never do until now was see the planet itself, since spotting so small a body in the blinding glare of its parent star would be like standing a block away and trying to see a moth fluttering next to a streetlight. The image of the smaller body would simply get washed out. All by itself, the image of WASP-96b is thus historic—and it tees up Webb for perhaps even-more sensational discoveries: Now that astronomers can crisply image exoplanets, they can also look for signs of life on them, as the light from their parent planet streams through their atmosphere, revealing the make-up of the gasses and the possibility of the chemical fingerprints of biology.

As Vice President Harris said yesterday, with these photos we are entering a “new phase of scientific discovery.” These images offer a “new window into the history of our universe,” added President Biden.

That Webb works at all is a triumph by itself, since its engineering and its location in space make it like no other telescope ever built before. The venerable Hubble Space Telescope, launched in 1990, circles the Earth in an orbit 547 km (340 mi.) high, just above our atmosphere, and looks like, well, a telescope—a metal cylinder with its optics built inside and light streaming in from one end. Its conventional look is due to the fact that Hubble works in a conventional way—seeing principally in the visible spectrum. That means its mirrors need to be protected from stray light from the sun, the Earth and other objects it is not observing—hence tucking them away inside the telescopic body—allowing them to focus on the ones that it is.

The Webb telescope operates instead in the infrared spectrum, a wavelength of light beyond the visible spectrum that is a measure more of heat than of light. Hubble could never see the 13.6 billion light years distant that Webb can, because visible light from so far away is obscured by dust and gas in deep space. Infrared light cuts right through that interference. In order to work, then, Webb needs to be protected from stray heat, which would blur its infrared optics just as stray light would blur Hubble’s visible-spectrum mirrors. For that reason, the telescope must be kept ultra cold. That makes for some unusual architecture.

The Webb’s main mirror measures 6.5 m (21.6 ft.) across, and is made of 18 hexagonal segments, each of which can be adjusted in seven different axes with a precision down to the nanometer—or a billionth of a meter—allowing the overall mirror to be focused for maximum detail and clarity. The mirror remains exposed to space, since placing it in a housing like Hubble’s main mirror would trap heat. It also does not orbit the Earth, where the constant day-night cycle of every orbit would cause its own disruptive temperature changes. Rather, it is positioned 1.6 million km (one million mi.) from the planet, where it station-keeps in what’s known as a Lagrange point—a spot in space where the gravity of the Earth and the sun cancel each other out, allowing objects to circle around the invisible point as if they were orbiting a solid body like a planet.

Still, there is the heat of the sun and even the remote Earth and moon to deal with, and for that reason, the mirror flies atop a protective sun-shield—perched on the shield like a sail on a boat. Roughly kite-shaped and as big as a tennis court, the sunshield is made of five layers of kapton, a foil-like film with a thickness no greater than that of a human hair. On the outer layer—the side which always faces the sun, keeping the mirror in permanent shadow—the temperature is about 110º C (230º F). On the inner layer, closest to the mirror, it is -237º C (-394º F). Exceedingly cold temperatures like that allow the vanishingly faint, invisible heat of infrared signals from deep space to register on the telescope’s mirror, and be translated digitally into visible images.

Webb is as much a time machine as it is an observing machine. The farther into space a telescope can peer, the farther back in time it’s looking, since images from distant objects—even traveling at the speed of light—take a very long time to reach us. The image we see of a galaxy 13.6 billion light years away is thus not an image of how it looks today—but how it looked 13.6 billion years ago, during the universe’s infancy. The Hubble space telescope can see a maximum of 13.4 billion light years distant, and while the mere 200 million light-year advantage the Webb offers doesn’t seem like much, it’s in fact huge. A great deal happened in that particular 200 million years and telescopes have been blind to it until now.

But the science Webb will be conducting over the years to come is for later—and already astronomers around the world are clamoring with proposals to book time on the Webb to study objects of interest over the coming years. Today, simply, is for the dazzle. The universe can stun with its scope and its beauty. Webb, more than any observatory before it, is pulling the curtain on all of that back.