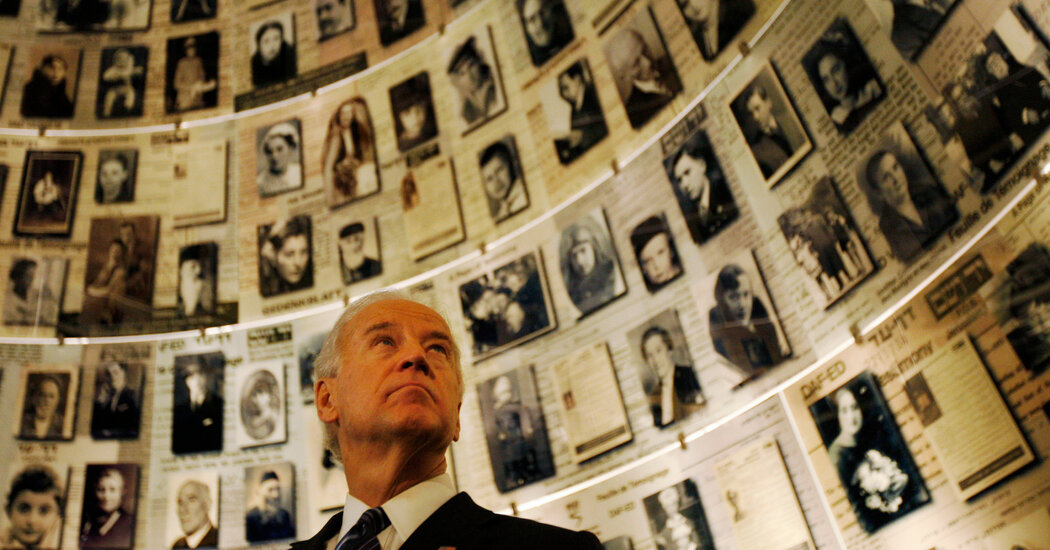 JERUSALEM — A long line of international dignitaries have paid visits to Yad Vashem, Israel’s official Holocaust memorial in Jerusalem, and President Biden’s visit on Wednesday was not his first.

As vice president in 2010, he toured the site’s Holocaust History Museum, Hall of Names, Children’s Memorial and Hall of Remembrance, where he participated in a memorial ceremony, and where an eternal flame burns by a crypt containing the ashes of Holocaust victims, commemorating the six million Jews killed by Nazi Germany and its collaborators during World War II.

Back then, Mr. Biden spoke movingly of how, as a young father, he had taken each of his sons at age 15 to Dachau, the Nazis’ first concentration camp. Established in Germany in 1933, it was liberated 12 years later by the United States military. Mr. Biden said he had wanted his sons to understand the “ability of mankind to be so brutal.”

This time, the presidential visit to Yad Vashem may provide a resonant reaffirmation of the human spirit and capacity for survival.

After arriving there on Wednesday, Mr. Biden donned a black kippa and met Yad Vashem’s chairman, Dani Dayan, a former settler leader who was Israel’s consul general in New York.

At a memorial ceremony, Mr. Biden rekindled the eternal flame. A children’s choir performed “Walk to Caesarea,” a 1942 poem by Hannah Szenes, a Hungarian Jewish resistance fighter in World War II. It was set to music in 1945, the year after Ms. Szenes was caught behind enemy lines and executed.

A cantor also recited a Jewish prayer for the souls of the Nazis’ victims, and Mr. Biden was presented with a token of remembrance: a replica of a painting created by a Holocaust survivor, Moshe Perl, immediately after the liberation of the Dachau camp.

He wrote in the memorial’s visitors’ book: “We must never, ever forget because hate is never defeated, it only hides.”

The president and his delegation of American and Israeli officials also met two Holocaust survivors, Rena Quint and Giselle Cycowicz, who survived various concentration camps and, after the war, immigrated to the United States. Ms. Quint, who was a young child during the Holocaust, and Ms. Cycowicz, who was a young teenager, are part of a fading generation that can bear witness to the Nazi atrocities.

With the two women seated on chairs, Mr. Biden kneeled down to their level, spoke with them for several minutes, clasped their hands and kissed them on their cheeks — again diverging from a suggestion earlier in the day by his national security adviser that the president would avoid physical contact such as shaking hands during his four-day trip, citing the rapidly spreading new coronavirus subvariant.

Afterward, Ms. Cycowicz, who is 95, said: “When I came to America, I did not know a soul there. And I met so many friends and now I have been invited to meet the most important person in the world.” Ms. Quint, who is 86 said, “Did you see the president hug me? He asked permission to kiss me and he kept on holding my hand.”

Mr. Dayan had remarked earlier to Mr. Biden that he was afraid — with the first lady, Jill Biden, not present — that the American leader would fall in love with the two women. Mr. Biden, looking emotional, replied, “I have — they know it!”

As he left, he blew them a kiss.