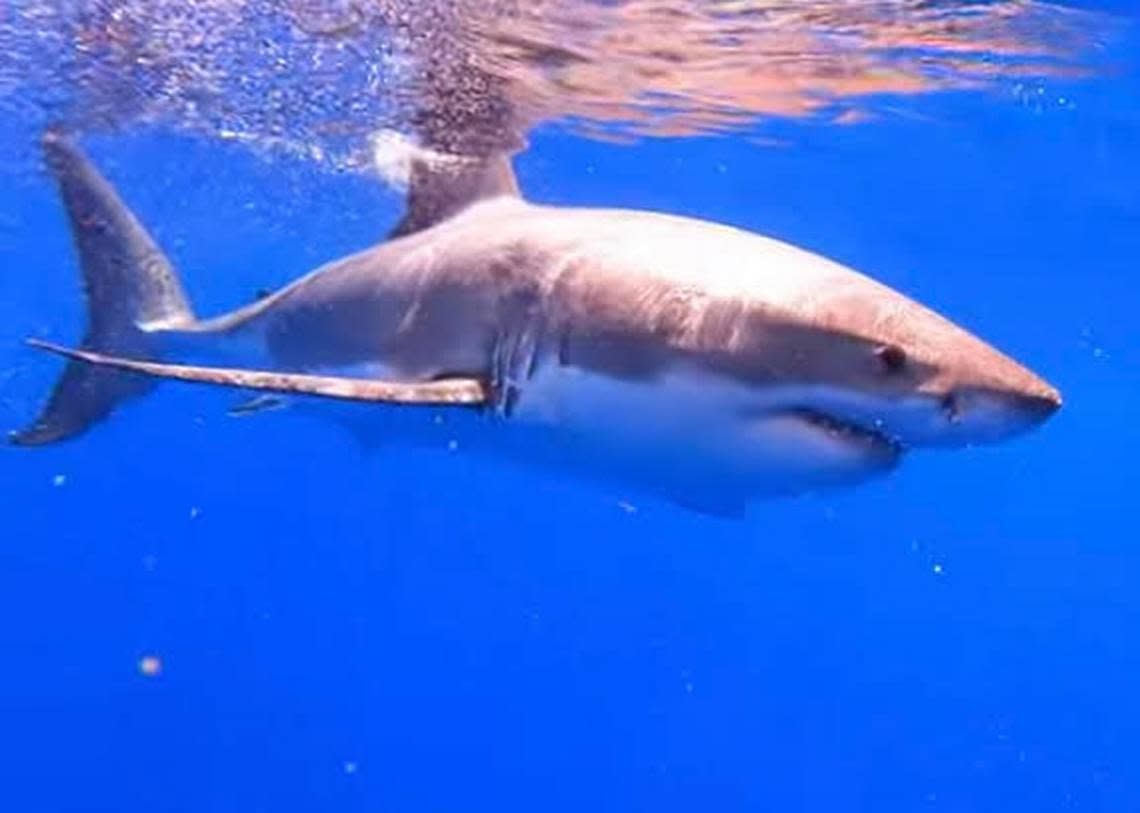 Great whites in the Florida Keys can be a rare sight. The large migratory predators prefer cooler water and are just passing through when they’re spotted in South Florida.

But when they do show up, most anglers, divers and others on the water view it as a treat.

That was the case when Amanda Callahan, Chris Marotti, Fred Lewie and Eric Rasmussen, all of Cudjoe Key in the Lower Keys, went out for a day of fishing Friday.

At about 1:30 in the afternoon, they were about seven miles southwest of the American Shoal lighthouse in 280 feet of water when a male great white began cruising around Rasmussen’s Calcutta open fisherman boat.

“The Gulfstream was in close that day and all the right conditions were present, the right time of day, current, tide, water temp and wind which made for a lot of activity,” Callahan told the Miami Herald/FLKeysnews.com.

Callahan, an avid diver and angler, began filming the shark both underwater and on the surface. She posted the footage on her Aquablu Youtube channel.

“The fishing and diving this last holiday weekend was great. We estimated the great white to be around 11 to 12 feet in length as the boat’s beam [width] is around 9 feet and the shark easily exceeded that,” Callahan said. “A healthy 12-foot male great white shark would weigh around 1,000 pounds.”

The way the shark was swimming, Callahan said it wasn’t in feeding mode and didn’t appear too interested in the boat or the people on board splashing to get its attention.

“He wasn’t feeding because we threw a dead bonito, and he wasn’t interested,” Callahan said. “But, it was awesome to see.”

Callahan, 31, is a professional scuba instructor and rebreather diver, who has been diving for over six years.

“We don’t want to encourage people to get in the water with an apex predator, and this stuff should only be done under the supervisor of professionals,” she said. Moretti, Callahan’s boyfriend, is also a longtime diver.

“The other two guys have decades of angling experience in the Lower Keys,” she said.

Mahmood Shivji, professor at Nova Southeastern University’s department of Biological Sciences and the director of the Guy Harvey Research Institute, said white sharks “are long-distance travelers as a natural part of their life-cycle, and have been known to move through South Florida waters during their migrations.”

When they’re not migrating, they prefer cooler ocean waters, and that’s where they tend to hang out.

“White sharks are one of only a handful of sharks that can keep their core body temperatures warm, and so can roam in cooler waters,” Shivji said.

White sharks are not listed as endangered, but they are federally managed, and it is not legal to harvest them. Shivji calls them “an absolute marvel of evolution,” and cited recent research at Nova’s Halmos College of Arts and Sciences as an example.

In that work, researchers at the South Florida school sequenced the whole genome of the white shark species. Shivji said the scientists “found remarkable positive genetic changes in many of its genes” that make its genome more stable. This could have positive impacts on human medicine since unstable genomes result in cancer.

Shivji said the research also found positive changes in the sharks’ genes involved in their wound-healing process that might explain how the fish are able to recover so quickly from injuries.

“It’s a privilege to see such an amazing animal live in its natural habitat,” Shivji said after seeing Callahan’s video.