Walls are climbing in first class 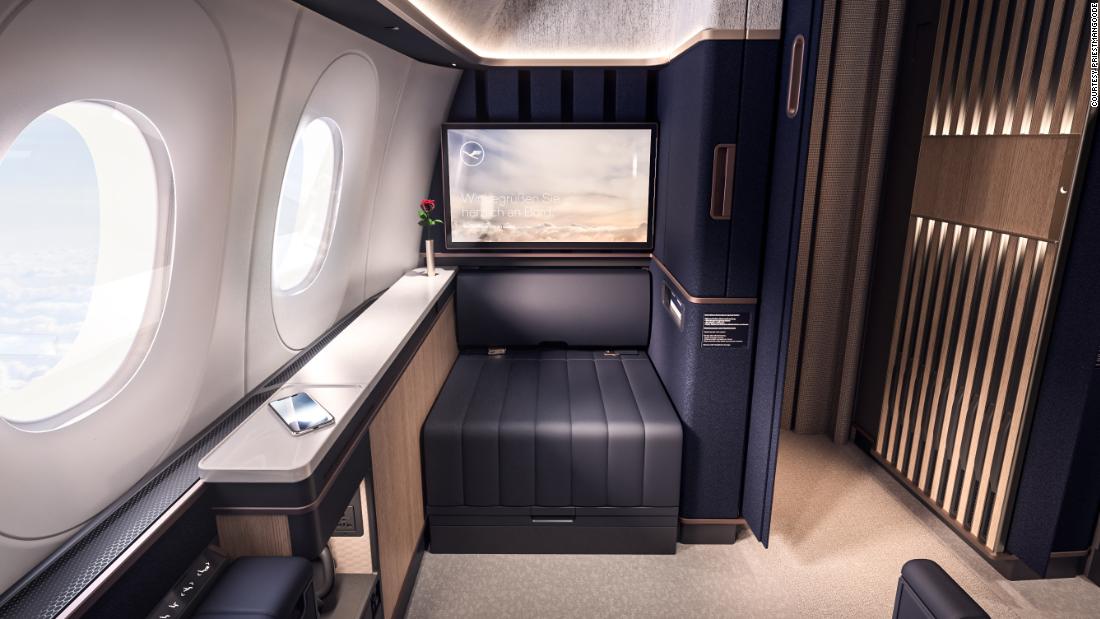 (CNN) — With airlines seeking to use the floor space footprint of their first-class suites as efficiently as possible, the latest developments in making these ultraswanky experiences even more luxurious aren’t about adding more width or length to the suites.

They’re about going up.

A new generation of high-wall supersuites are stretching up to the ceilings of the latest wide-body jets, eclipsing the suites that came before.

The first generation of first-class suites with doors were introduced about 15 years ago on the Airbus A380. With the biggest commercial airplane ever built came the biggest first-class seats, and these quickly spread onto other airliners such as the Boeing 777.

In the decade and a half since, most first-class seats now have doors.

The main function of the doors is privacy, allowing first class passengers some of the top luxuries in our always-on world: the opportunity to create their own space to work, relax with a movie on a big screen or enjoy Champagne-and-caviar private dining.

Yet until recently, the first-class doors themselves didn’t extend all the way to the ceiling, ending instead at about chest height for most passengers, which means that the crew and other passengers who are passing by can see in.

This is by design, since safety specifications mean that crew members need to be able to see into the suite.

These sets of rules are known as cabin view requirements, and they essentially mean that crew must have a line of sight into the cabin from their jump seats by the emergency doors during takeoff and landing. (For those of us not in first class, cabin view requirements are also why crew have to tie up curtains before landing, as well as why those little horizontal letterbox-shaped hatches in the bulkhead dividers between cabin classes exist.)

But the airlines with high-wall suites are managing to meet those requirements, too.

Some suites went higher than others. Etihad’s first-class Apartments on the A380 were tall but not ceiling-height, although its The Residence suite had a closed-off bedroom separate from the seats that Residence passengers had to use for takeoff and landing.

Emirates has a high-wall, supersuite category in its Boeing 777 first class.

Emirates was the first airline to introduce the high-wall supersuite category with its latest Boeing 777 first-class suites, which are entirely enclosed and allow passengers to customize their experience all the way down to the color of the accent lighting. Emirates uses closed-circuit TV cameras — accessible only live and only by cabin crew — to get around those cabin view requirements.

The latest airline to go in for these high-wall supersuites is Lufthansa.

It is working with seatmaker Collins Aerospace and design house PriestmanGoode to create its game-changing Allegris first-class suite. So far, Lufthansa isn’t saying how it manages to meet cabin view requirements, but if there is only one row of seats, it may be as simple as a set of mirrors that mean crew can see into the suites when the doors are open for takeoff and landing.

As with any airline seat, prices fluctuate but these experiences can stretch into the tens of thousands of dollars.

CNN Travel sat down with Daniel Macinnes, director at PriestmanGoode, to learn more about how these new suites are designed, why airlines are choosing them, how they fit into the aircraft and how they have to be designed for certification.

EASA is the European Union Aviation Safety Agency, and together with the Federal Aviation Administration in the United States, it’s one of the world’s two primary aviation safety regulators. It takes the safety certification lead for aircraft produced by European planemaker Airbus.

Creating the new Lufthansa supersuite, Macinnes says, “was quite an exciting challenge, because for the first aircraft that it goes on to, which is an A350, no one’s ever done this before.”

Lufthansa has a new Allegris first-class suite with high walls.

When creating any new seating experience, but especially when pushing the boundaries of premium cabins like this one, there’s a lot of interplay between the airplane maker, the seat maker, the airline and their design partner — or partners.

The new Lufthansa seat has been developed over five years, a collaboration between the airline’s product experience and brand teams, Airbus, PriestmanGoode and Collins.

“We did many, many versions of this over those years to see what worked, what heights worked — with their management team, with the product team, building mockups, just really kind of seeing how that fed their excitement,” Macinnes explains.

During the design process, the team had to make a variety of adjustments, such as removing the overhead bins and adding a wardrobe into the door support.

That means that passengers can change in the space of the suite — no need to head to the lavatories — into the luxury pajamas the airline provides and then hang up their clothes.

That makes for a more comfortable and relaxing flight in pajamas made from breathable fabrics, without tight waistbands, and it’s pure pleasure to put on a fresh set of PJs after the hustle and bustle of the airport. It also means that your clothes finish the flight fresh, uncreased and ready to be worn to your final destination.

The team also made sure that the cabin airflow — carefully engineered by the airplane manufacturer to optimize temperature and fresh air for the cabin — is not disrupted, as well as figuring out just how high the walls could go before the air conditioning system needed to be redesigned for a fully enclosed suite.

“There’s a little bit of space” at the top of the walls of the Lufthansa suite, Macinnes says, noting that “we got to a point where it was the sweet spot everybody was happy with.”

The critical part of the design, Macinnes explains, is “that it makes it feel like it’s your own space, rather than … to make it an open cabin. They wanted that kind of privacy, and you’ve got enough space that you don’t need to really feel like you’re kind of closed in. It’s not like a closed-off business class — you’ve got a lot of space within this. So even if you sit there with the door closed, it feels big, you don’t feel trapped.”

The future of first class is very much a high-walled one.

Images for Qantas’ forthcoming Airbus A350 first class for nonstop Sydney flights to New York and London show higher walls than the airline has used before.

The trick, of course, is to do it in a way that fits the most neatly with the cabin.