Video: Ted Cruz was confronted after NRA conference by ex-House candidate at Houston restaurant: ’19 children died! That’s on your hands!’ 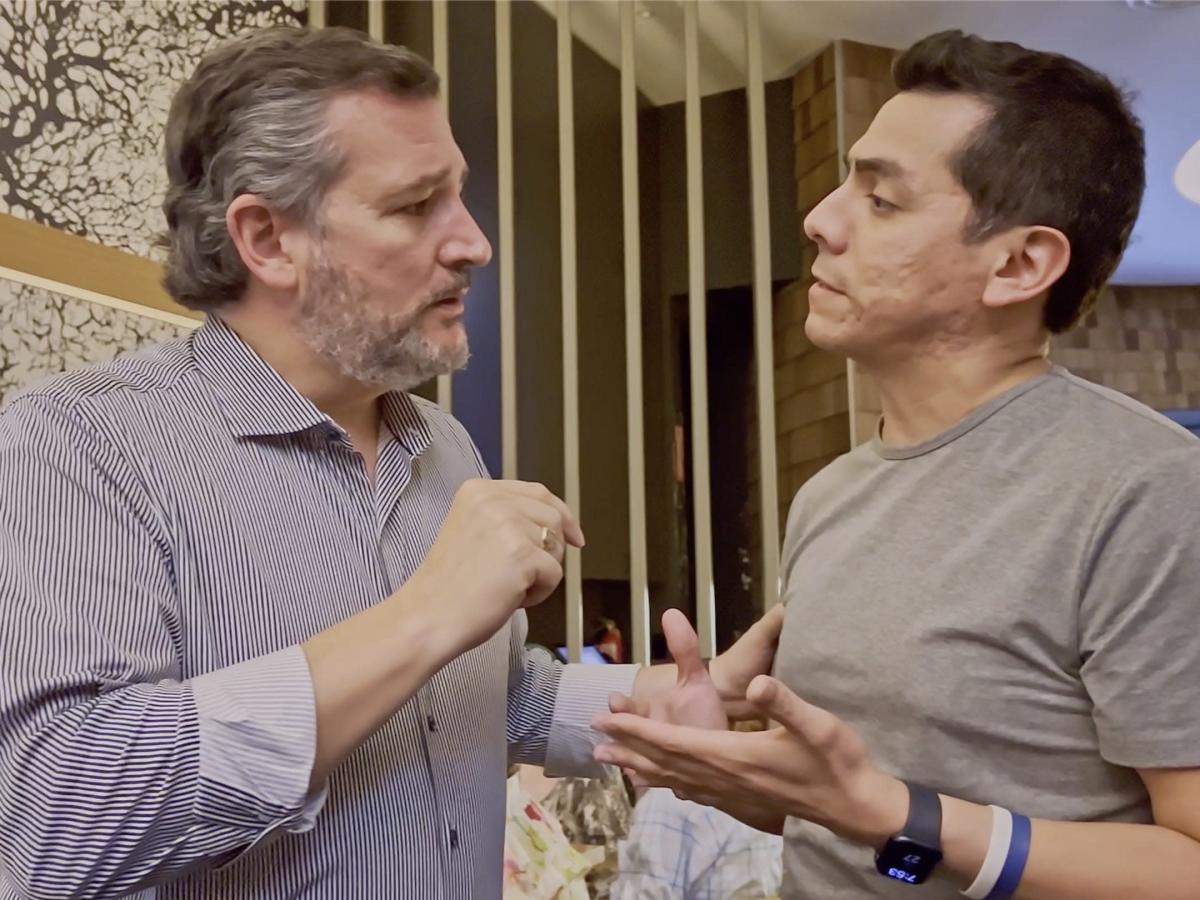 A video shows Sen. Ted Cruz of Texas being confronted at a restaurant following his appearance at the National Rifle Association convention in Houston.

Hernandez, an independent, ran for Congress to represent TX-09, which contains portions of Houston, in 2018.

A longer video was posted by Indivisible Houston, a political advocacy organization of which Hernandez is a board member. The video shows the beginning of the exchange, where Cruz posed for a photo with Hernandez before the latter began asking why Cruz refuses to support stricter gun control laws including background checks.

At one point, Hernandez said the Uvalde gunman “waited until the day he was 18” to purchase several firearms. Authorities have confirmed that the gunman purchased two assault weapons following his 18th birthday on May 16.

Cruz responded, “But the background checks wouldn’t have stopped the shooter.” Cruz has opposed nearly all gun control measures proposed in Congress, instead calling for armed officers at schools.

At different points in the video, Cruz told Hernandez, “Alright, you don’t want to listen to me,” and “You don’t know what you’re talking about.”

Hernandez told Insider that he happened to be dining at the restaurant when he saw Cruz walk in. He asked Cruz if he would pose for a photo after the senator finished his dinner, and the senator got up right away.

“As a constituent, you know, he refuses to allow us to engage him in open public forums. So this is one of the ways we can reach him,” Hernandez said. “I’d never done anything like this before.”

He added: “In that moment, I’m like, ‘I have to do this because there are people that are really suffering.’ And if it takes Ted Cruz, you know, making Ted Cruz uncomfortable while he’s having dinner, I mean, that’s just the price of it.”

The NRA’s annual meeting, which began Friday, drew protests in Houston. Cruz’s appearance at the convention was notable after several other top speakers – such as Gov. Greg Abbott, Sen. John Cornyn, and Rep. Dan Crenshaw – dropped out.

Abbott, however, did appear virtually and went in person to Uvalde.

“The fact that Ted Cruz still shows up to the convention, an organization that actively blocks, you know, legislation that can help end gun violence in this country. I mean, that’s just beyond belief,” said Hernandez, who attended a protest.

During the confrontation with Cruz, Hernandez was thinking of the parents of the slain children in Uvalde, as well as his own child.

“I’m a new father. I have a child. This hits different. Like, I just want to know what are you doing as a Senator? And what things can you support?” Hernandez said, noting that he was frustrated when Cruz lambasted Democrats and the media in his responses. “I’m like, can you just answer the question? Like where do you stand? What do you bring to the table?”

A spokesperson for Cruz did not immediately respond to Insider’s request for comment on Saturday. In addition, an automated message from his senate office said his voicemail was full.

Hernandez told Insider that if politicians continue to avoid action on mass shootings, “we have to confront them.”

“The moment is now,” Hernandez said. “They’re always gonna say, ‘Now is not the time’… But you know what, it is the time. Now is the time to stop the next one.”

Biden’s Saudi Lesson: The Only Path Runs Through M.B.S.