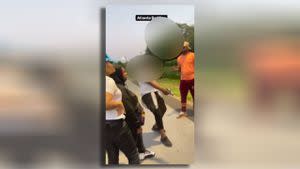 A confrontation over a stolen phone ended with a gun drawn on the Atlanta BeltLine.

Video of the incident was posted on social media showing the drama unfolding.

Hear from some of the witnesses who saw the whole thing unfold, starting on Channel 2 Action News at 4 p.m.

Police and witnesses told Channel 2′s Audrey Washington that a woman had just used her phone to obtain a rental scooter along the Beltline, when a teenager snatched the phone from the woman.

People who witnessed this confronted the teen and told him to return the phone. In turn, a group of teenagers approached the witnesses.

One of the teens took out a gun and pointed it at the witnesses, before the group walked away with the phone.

The video of the incident shows that it was still light outside with plenty of people walking around when the teen suddenly pulled out a gun.

Atlanta police told Washington that they are investigating the incident, but so far, they have no one in custody.