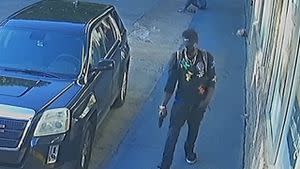 Atlanta police have released new surveillance video in the deadly shooting of a security guard outside an Atlanta restaurant.

Anthony Frazier, 51, was shot and killed Monday around 7 p.m. outside the American Wings and Seafood restaurant on Cleveland Avenue.

Surveillance video shows the suspect walking up to Frazier from behind dressed in a black long sleeve t-shirt with graphics on it, a black ballcap with a Nike logo, and carrying a camouflage backpack. The video appears to show a gun in his right hand.

Police said the suspect shot Frazier from behind as the guard got out of his SUV. After the shooting, the video shows the man going through the guard’s pockets and walking away.

In the video, investigators believe a man sitting on the curb saw and heard what happened. He can be seen shaking his head and walking past Frazier’s body.

The video shows several other people walking past Frazier’s body.

Police said they are asking for the public’s help to identify the suspect and others seen in the video for questioning.

Kam Kae said he would always say hi and make sure she got to her car safely.

“So attentive, he always watched the door. Why would somebody do that to him?” she asked.