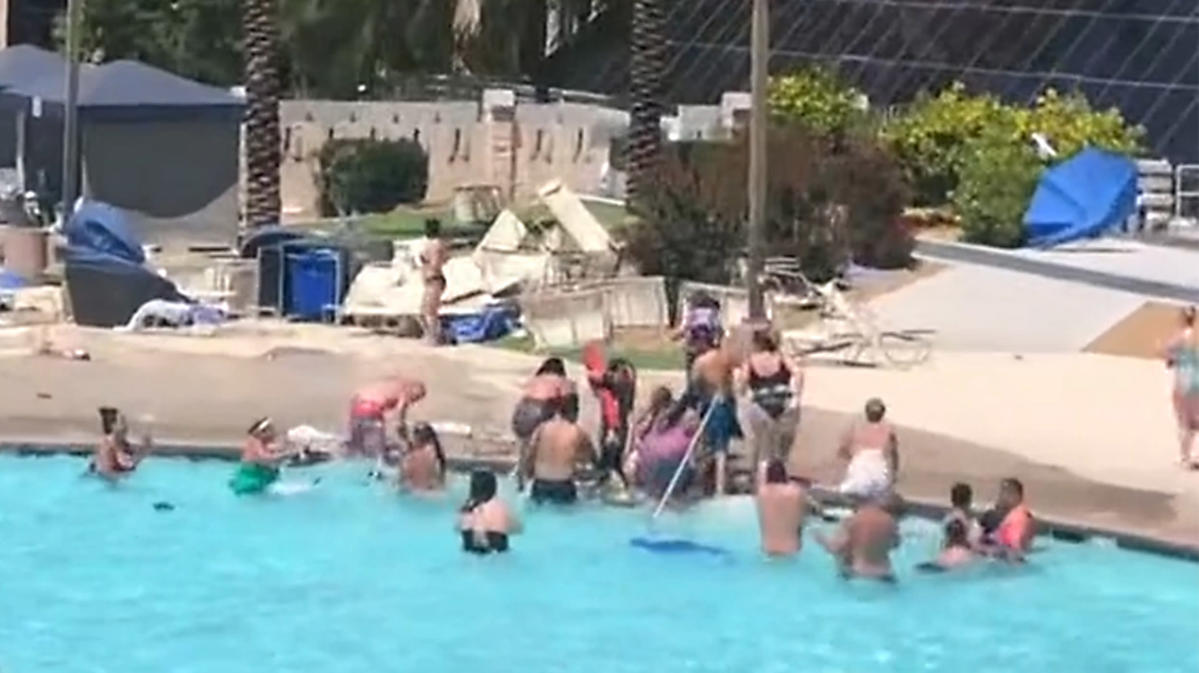 A relaxing day at the pool turned into a scary experience for many hotel guests in Las Vegas on Friday.

A viral TikTok video shows the shocking moment when pool chairs and cushions suddenly fly up into the air at the Luxor hotel, creating a chaotic scene.

In the clip, many hotel guests remain in the pool and wait as the quick-moving weather phenomenon passes. But some folks were knocked to the ground.

The TikTok user who filmed the video told NBC affiliate KSNV that the scene resembled a “mini-tornado” and said she noticed something odd was happening when it suddenly got really windy.

“I did not expect for all the chairs to start flipping around in front of the two people who were sitting there,” Ofelia Abundez said. “The chairs were on top of them and hitting them and it was very scary. A lot of us who watched it were just astonished.”

The video captured a dust devil, a wind phenomenon that the National Weather Service describes as “dust-filled vortices” that form when the ground warms the air directly above it with cooler air above that layer. This creates an unstable condition, since warm air is lighter than cool air. The sudden release of warm air rising through the cool air can create these vortices, which “are generally smaller and less intense than a tornado.”

Dust devils are pretty common around the world, according to the NWS, with diameters typically ranging from 10 feet to 300 feet and average heights of roughly 500 feet to 1000 feet.

Dust devils usually only last a few minutes and have wind speeds of 60 mph or more. But they can go on for an hour or longer and reach intense heights (several thousand feet). They have the potential to create significant damage, too, taking out small structures in their path.

“Dust devils form in areas of strong surface heating, usually at the interface between different surface types, such as asphalt and dirt, or even irrigated fields and dirt roads,” according to the NWS website. “Typically, they occur under clear skies and light winds, when the ground can warm the air to temperatures well above the temperatures just above the ground.”

The Las Vegas dust devil dissipated as quickly as it hit, and Abundez said it left a bit of damage in its wake.

“Some of the (pool) beds went way off to the other side and they all piled on top of each other, all the chairs,” she said.

Dust devils aren’t the only weather phenomenon to captivate social media users in recent days. Last week, a derecho, a widespread windstorm, turned the sky green in South Dakota. The rare sight occurred when blue light from rain clouds joined forces with red and yellow light from a sunset.