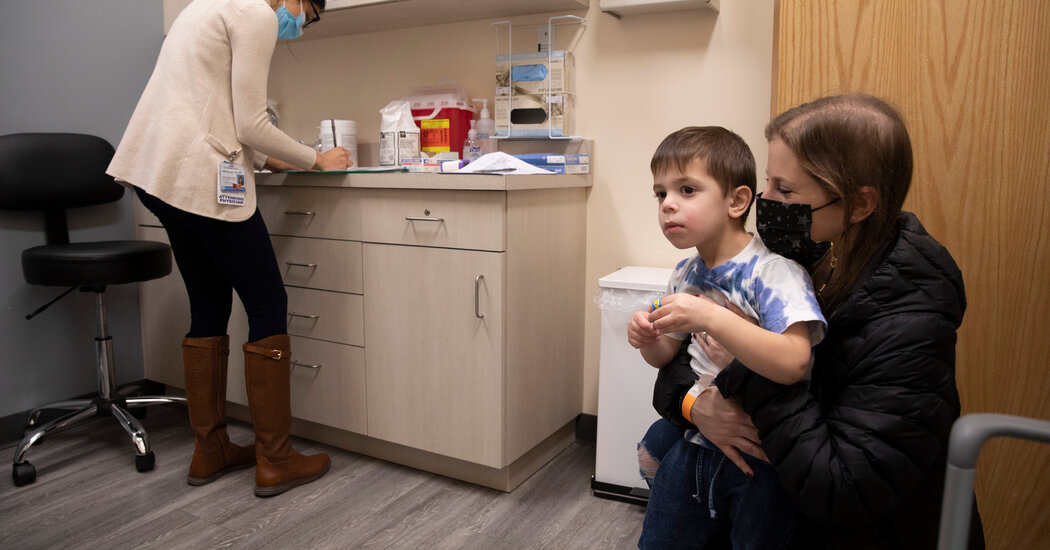 Why hasn’t the F.D.A. approved a Covid-19 vaccine for children under 5? Government officials have given two conflicting answers in recent days — one that places responsibility on vaccine manufacturers, another that casts the lack of approval as a deliberate federal policy.

It’s the latest instance of what has been a recurring problem during the pandemic. Public health officials have sent confusing messages about Covid policy. They have done so on masks, tests, adult vaccines and basic Covid statistics.

Either way, the situation has bred frustration among many Americans — such as parents of young children who are desperate to vaccinate their children. These parents listen to the public statements of government officials and the news coverage but fail to find comprehensible answers.

“I feel like the goal posts have been moving,” Rachel Perera, the mother of an 8-month-old in Los Angeles, told The Times. Dr. Jessica Snowden of Arkansas Children’s Hospital said: “I hear from lots of parents every day, asking, ‘Do you know, do you know? When’s it going to be approved?’” Senator Patty Murray of Washington, describing parents in her state, said, “They’re frustrated, they are confused, and I am too, and they really do deserve some clarity on this.”

The confusion has become one more factor contributing to Americans’ distrust of major institutions like the government, the media and the medical system. People think they are not getting straight answers, and they’re right about that.

When F.D.A. officials have spoken publicly about the lack of a vaccine for young children, they have put the onus on Moderna and Pfizer, the vaccine makers. The officials have suggested that the companies have not completed their portion of the regulatory process.

During a Senate hearing this week, Dr. Peter Marks — the F.D.A. official who oversees vaccine approval — declined to give a direct answer about why the agency had not authorized the vaccine for young children. But he did say this: “Just remember that we can’t actually finish our reviews until we actually have complete applications.”

An announcement yesterday from Moderna seemed consistent with his suggestion. The company said that it would finish submitting data from its research trials by May 9 and that it hoped the F.D.A. would subsequently approve the vaccine for young children.

Together, Moderna’s announcement and Marks’s comment seem to suggest that the F.D.A. is eager to approve a vaccine for young children as soon as possible. Other evidence, however, indicates the opposite.

On CNN last week, Dr. Anthony Fauci, a top Biden administration Covid adviser, suggested that the F.D.A. would not approve a Moderna vaccine for young children until it could simultaneously approve one from Pfizer. Approving two vaccines at different times, he said, could “confuse people.” An article in Politico offered the same explanation, reporting that regulators wanted to postpone any action until it could approve both vaccines at once.

This planned delay raises two big questions. One, why does the government think Americans are incapable of handling different approval dates? (Zeynep Tufekci, a Times columnist, argues that Americans can handle it.) Two, why is the federal government telling us conflicting stories — one in which the F.D.A. is deliberately delaying approval and another in which the agency is merely waiting for Moderna and Pfizer to submit the necessary information?

I posed these questions to Biden administration officials yesterday, and the answers were fascinating. Although the officials did not want to be identified, they offered a much clearer answer than I have heard them give in public.

At the moment, the F.D.A. is indeed waiting for more data from both Moderna and Pfizer. And the agency would prefer to make decisions about the two vaccines at the same time, partly to allow parents to decide which vaccine is best for their young child.

“If the stars align, we would like that to happen,” an administration official told me. “However, we are not going to put ourselves in a situation where we sit on data.” If one company’s timetable is only a few days or weeks ahead the other’s, the F.D.A. will wait to act on both at once. If the gap is longer, the agency will act on either Moderna or Pfizer without waiting for the other.

“We don’t want to delay anything unnecessarily,” the official said.

I told him that his answer was the clearest one I had yet heard from the administration and asked why officials were not providing the same clarity in public. He said he hoped that soon it would.

For now, the F.D.A. has been speaking in bureaucratic jargon and leaving people confused. “The messaging,” Dr. Jennifer Lighter, who specializes in pediatric infectious diseases at N.Y.U., told me, “has been so poor.”

It’s a repeat of what happened when the agency’s leaders simultaneously urged adults to get vaccinated but initially refused to give the vaccines full regulatory approval — or when public health officials discouraged people from wearing masks early in the pandemic, despite abundant reason to think masks could slow Covid’s spread.

Public health officials in this country are often uncomfortable trying to convey the full truth. They worry that people will misunderstand the details and behave dangerously. Instead, the officials provide only partial truths and hope that Americans won’t notice. The strategy hasn’t been very successful.

For more: The health risks that Covid presents to young children remain very low — lower than those of many other everyday activities, like riding in a vehicle. But a vaccine for young children would still be beneficial, reducing illness and keeping children in school, with few downsides, many experts believe.

The War in Ukraine

Superstitions of the stage

Theaters are superstitious places. When the new Broadway revival of “Macbeth” canceled performances because its lead, Daniel Craig, had tested positive for Covid, there was chatter of the curse again, Alexis Soloski writes.

The “Macbeth” superstition is an invention of the critic Max Beerbohm. In 1898, Beerbohm wrote a column falsely claiming that a young actor had died before the play’s debut. His words took hold, and stories of “Macbeth”-adjacent injuries, accidents and deaths began pouring in.

A lot can go wrong during a live performance, Anjna Chouhan, a Shakespeare lecturer, pointed out. Actors may subscribe to superstitions and various rituals as a way to “enforce your control over things that can’t be controlled.”

The Times spoke to Broadway performers — believers and skeptics — about whether they had experienced supernatural moments in the theater.