Ukrainian Children Are Being Separated From Caregivers at U.S. Border 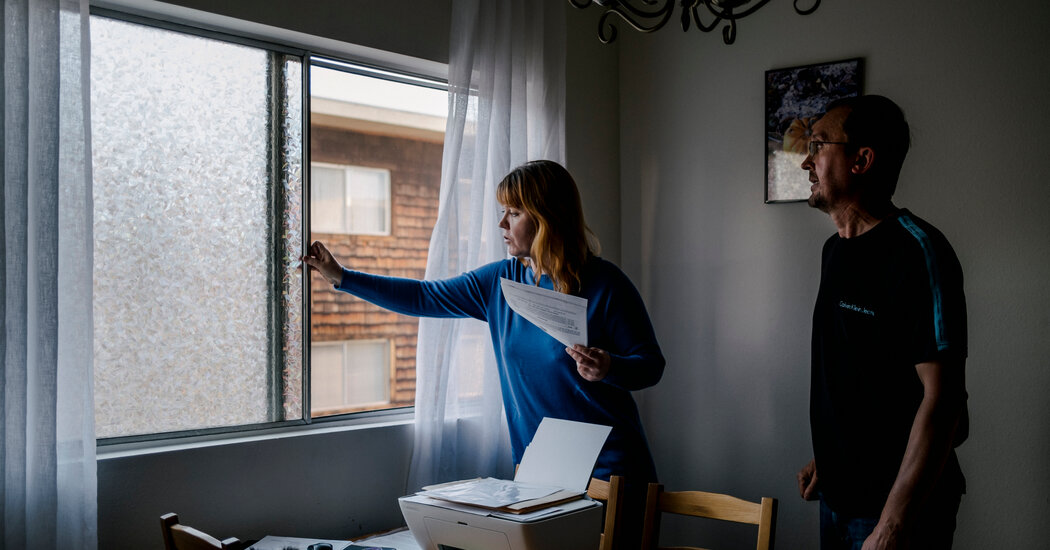 LOS ANGELES — After Iryna Merezhko persuaded her sister in Ukraine that her young nephew should join her in Los Angeles to wait out the war, she traveled halfway around the globe to pick him up. “I told him it would be a California vacation,” she recalled. “We would go to Disneyland, Universal Studios, the beach.”

The boy, Ivan Yereshov, 14, made it with her to Tijuana, Mexico, early this month, joining thousands of Ukrainians waiting at the border for permission to enter the United States.

To be on the safe side, Ms. Merezhko carried a notarized power of attorney attesting that Ivan had been handed over into his aunt’s care. But an officer informed them that Ivan could not enter with his aunt — because she was not his parent. “They told us we would be separated for one or two days,” recalled Ms. Merezhko, who said that she embraced Ivan as his initial enthusiasm dissolved into dismay.

Ten days went by before she would learn his whereabouts.

Dozens of Ukrainian children have been separated from relatives, friends or older siblings with whom they have traveled to the southern border under a law designed to prevent migrant children from being trafficked. In effect since 2008, the law requires U.S. border authorities to place “unaccompanied minors” in government shelters, where they must remain until their guardians have been screened and approved.

The brunt of the law has been felt by Central American children, the largest group of minors to reach the border in recent years, and who are often fleeing gang violence. But those children typically are aware of the policy and know that they will be taken into temporary custody. For Ukrainian children, the separation from their caretakers has been an unexpected, shocking twist in their escape from a war zone.

Similarly tense scenes unfolded at the border under the Trump administration, which used family separations, often much longer ones, as punitive measures to discourage families from attempting to cross into the United States. Under that policy, even children accompanied by their parents were removed to government shelters.

“Imagine — some of these children’s parents died or are fighting; they’re traumatized from the war and the journey,” said Erika Pinheiro, a lawyer with Al Otro Lado, a migrant support group that works with asylum seekers in Tijuana, a border city that is opposite San Diego. “Then they get separated from family, without understanding why, and sent to a shelter where staff don’t speak their language.”

Ms. Pinheiro acknowledged that it was vital to protect children from potential traffickers, but she said that more careful screenings at the border could alleviate the need for traumatic separations. “There are people out there who don’t have the children’s best interest at heart,” she said. “There are also lots of extended family who should be legitimately processed.”

U.S. authorities have not released figures on how many Ukrainian children have been separated from caregivers, but volunteers working with the refugees said they have counted at least 50, a number that is increasing. Up to 20 children have lately been arriving daily in Tijuana with someone other than a parent, they said. Often these children have a father who could not leave the country because men must support the war effort and a mother who could not travel. Their parents entrusted someone else to ferry them to the United States.

Customs and Border Protection said in a statement that it was required by law to transfer minors who are not accompanied by a parent or legal guardian to government shelters.

“Caring for our most vulnerable populations, including children, is of utmost importance,” the agency said.

Migrant advocates concede there is a risk of children becoming vulnerable to trafficking and exploitation amid the chaos of war, but said U.S. authorities were enforcing their country’s policy inconsistently, sowing confusion and heartache. Sometimes a child traveling with an adult sibling has been removed to a shelter, but not always. Many children have been separated from aunts, grandparents or friends; others have been released to continue on with them.

Last month, Molly Surazhsky of Brooklyn, the daughter of Ukrainian immigrants, escorted Liza Krasulia, 17, whose mother is a close family friend, from where she had escaped the war in Poland to the southern border.

Ms. Surazhsky said she had consulted an immigration lawyer in New York who said that she did not foresee any problems. They carried a notarized letter from the parent giving Ms. Surazhsky authority to care for Liza.

But on March 30 at the border, officials told them that they would have to hold the girl for up to two days. “They said, ‘She will be treated better than we are,’” recalled Ms. Surazhksy.

Liza was shocked and began to sob.

“I told her, ‘Don’t worry. I’m not going anywhere without you.’”

After checking into a hotel in San Diego, Ms. Surazhsky got a call from Liza, who by then was even more distraught. Officers had confiscated her phone, baggage, book — and her shoelaces. She was sharing a cell at the border with 25 women and children from Ukraine, Russia and other countries, all trying to sleep on the floor with only flimsy foil blankets to cover them.

A few days passed before Ms. Surazhsky learned that Liza had been transferred to a migrant children’s shelter in the Bronx.

She submitted 40 pages of paperwork and fingerprints, and waited for approval to officially sponsor her.

On Monday, she was informed that Liza would be released from the shelter the following day, three weeks after they had crossed the border.

“While I understand the necessity of vetting caretakers, there has to be a better way for the government to do this without inflicting more trauma on the children,” said Ms. Surazhsky, a textile artist. “They are making kids feel like prisoners.”

Casey Revkin, a co-founder of the nonprofit Each Step Home, which helps migrant families navigate the reunification process, said that for years Central American children have been unnecessarily removed at the border from grandparents, adopted parents and siblings.

“The government could send social workers to the border to verify the familial relationship and avoid the trauma of separating these children, who have gone through so much, from their caregivers,” Ms. Revkin said.

Ms. Pinheiro pointed out that during the Afghan evacuation, the U.S. government issued a directive that instructed authorities to allow children to remain with “nonparental caregivers” with whom they had entered the country, rather than be transferred to shelters.

Government shelters where the children are being taken are operated by a separate government agency, the Department of Health and Human Services. The agency said in a statement that its role was not to make “immigration determinations.”

“Our job is to provide them with care and protection while they’re in our temporary custody,” the statement said.

In Mariupol. About 2,000 people were trapped at a large steel factory in Mariupol along with Ukrainian forces that are waging what appears to be the last defense of the city. Russia is seeking to take the city as part of a strategically important “land bridge” to occupied Crimea.

Possible banned weapons. Based on evidence reviewed by The Times, it is likely that Ukrainian troops used cluster munitions in an eastern village that they were attempting to retake from Russian forces. The weapons are banned by many countries for the harm they can cause to civilians.

Russia’s economy. While President Vladimir V. Putin boasted that the Russian economy is holding up under Western sanctions, his central bank chief warned that the consequences were only beginning to be felt, and Moscow’s mayor said that 200,000 jobs are at risk in the capital alone.

In the case of Ms. Merezhko, who has lived in the United States since 2014, the family had made a decision to try to get Ivan to safety in Los Angeles as quickly as possible, without waiting for the United States to begin issuing permission for refugees to fly directly. Entering through Mexico, which does not require visas for Ukrainians, has been a stopgap measure for an estimated 5,000 Ukrainians since the war began in February.

Ms. Merezhko spent about $7,000 to purchase airline tickets, took leave from her job as a pharmacy technician and set out to retrieve the boy. They rendezvoused in western Ukraine, after he had managed to board an evacuation train out of the besieged city of Kharkiv, where the family lived.

“I thought I was doing the right thing because it was the only way to save the child, to bring him to a safe place,” she said.

From Madrid, they boarded a flight to Monterrey, Mexico, and connected on April 6 to Tijuana. They slept in a tent erected outside a gym that was already overflowing with Ukrainians waiting to report to the border checkpoint for processing.

When it was their turn two days later, Ms. Merezhko said, Customs and Border Protection officers carefully studied the documents and notarized letter from Ivan’s mother stating that her sister had been granted full responsibility for him.

An officer told them that they would have to be separated — for just one or two days.

“Everything will be OK,” Ms. Merezhko assured Ivan.

The following day, when her phone rang, an officer passed the phone to Ivan. “Mama, Mama, is that you?” he asked, thinking it would be his mother in Ukraine.

His aunt’s heart sank. In the 60-second exchange, all that he was allotted, the boy said that he was still at the border. The officer told Ms. Merezhko to expect another call soon.

Days went by, no call came and her anxiety mounted.

Ms. Merezhko learned that Ivan was now probably at a government shelter, and she found the number of a hotline for families trying to locate children.

An attendant confirmed that Ivan was in the system, and told his aunt that she would be contacted by a case manager in a few days.

“I got no information about how he is, where he is,” recalled Ms. Merezhkho.

She called the hotline again, and an operator urged her to be patient: It could take 20 to 30 days before Ivan was released, she said, and that process had not even started.

During an anguished call, Ms. Merezhko’s sister, Kateryna, told her that she now regretted sending away her only child. “At least we would know where he was if he had stayed with us,” she told her.

Over the weekend, with the help of Ms. Revkin, from the nonprofit, Ms. Merezhko filled out 25 pages of forms to which she attached green cards, marriage certificates, birth certificates and pay stubs for her and husband. Yet she had nowhere to send the file.

Finally, on Monday, Ms. Merezhko’s husband, Vadym, got a call from Ivan, who said he was at a shelter in California. A case worker said they could send the documents. But there still was no word on when Ivan would be released.

“Good news today,” said Ms. Merezhko. “But I am a little bit worried about how long it will be.”