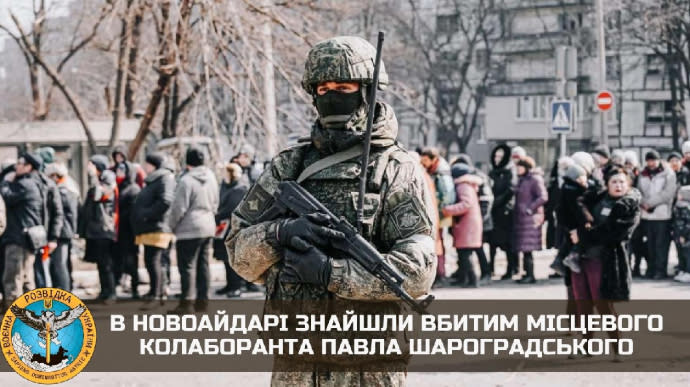 ROMAN PETRENKO – FRIDAY, 29 APRIL 2022, 12:12 On 25 April, local collaborator Pavlo Sharohradskyi disappeared in the temporarily occupied town of Novoaidar in the Luhansk region. He was soon found shot in the head, with wounds on his body. Source: Chief Intelligence Directorate of the Ministry of Defence of Ukraine Details: Sharohradskyi was a “professional public figure” before the Russian invasion. He founded the NGO Novoaidarska sich, and was for some time the director of the Novoaydarskyi village centre Sports for Everyone. He did not own a business or have a high-income job, but nonetheless presented himself as a “high-income person.” The Chief Intelligence directorate says that after the occupation of Novoaidar he offered his services to the new “masters.” He provided the occupying forces with information about patriots, members of the anti-terrorist operation/joint forces operation, members of their families, and employees of the local administration. He was abducted from the premises of the Shchastia Regional State Administration, where he took part in a “meeting” with people in balaclavas and military uniforms of the Russian Army. Background: On the morning of 20 April, well-known pro-Russian activist and blogger Valerii Kuleshov, who worked with Kyrylo Stremousov, was killed in Kherson.