Tucker: It’s almost impossible to take any of these people seriously 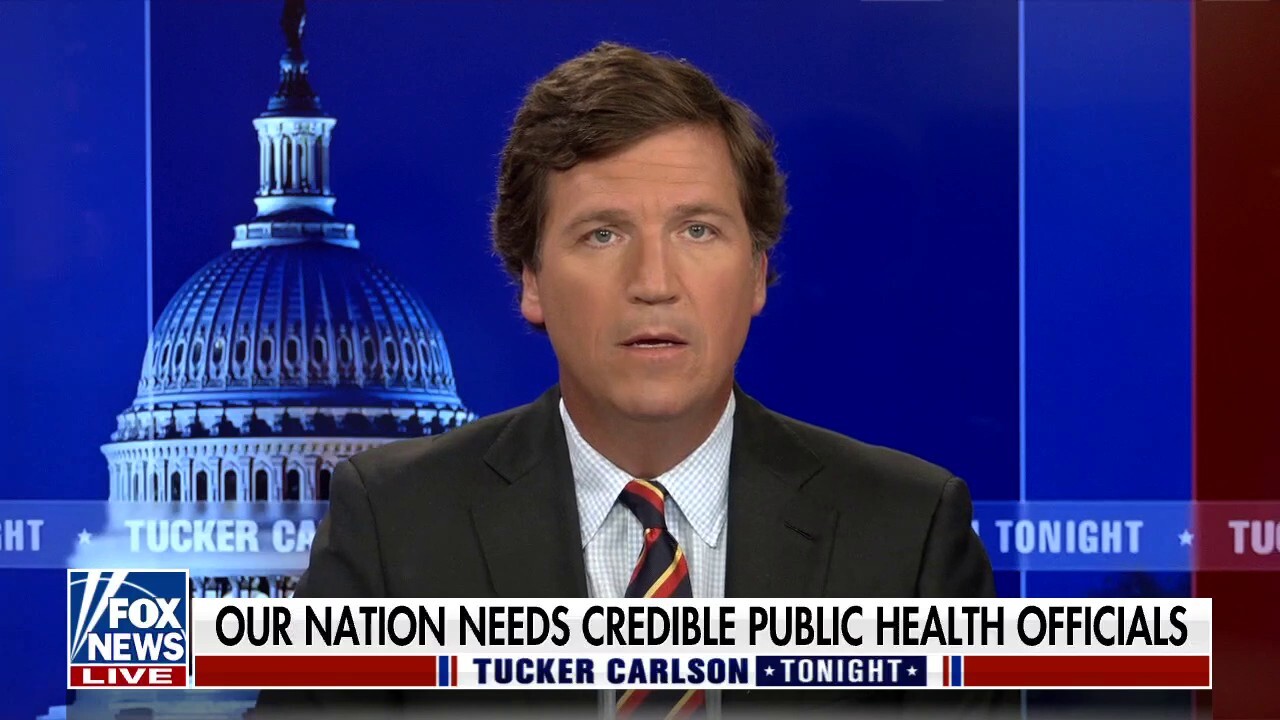 Good evening and welcome to “Tucker Carlson Tonight.” Happy Wednesday. It’s depressing to say it out loud, but it’s true. There’s probably never been an institution in this country more thoroughly discredited than the field of “public health” is right now.

At this point, it’s almost impossible to take any of these people seriously and that is not a good thing. It’s a bad thing. We need credible public health authorities, but we don’t have them. In fact, after all we’ve seen, ask yourself, who would you be more likely to trust: some guy selling discount timeshares in Cabo? Or a self-described epidemiologist appearing on MSNBC? It’s not even close.

The timeshare guy might be sleazy. Obviously, he is, but is he the one who shut your kid’s school down for two years for no reason? Is he the one who forced you to take untested drugs that you didn’t want? Is he the one who demanded you stay home in fear, even as he applauded, unmasked BLM rioters, torching buildings in cities across America? No, he’s not. The timeshare guy, whatever his obvious faults, didn’t do any of that. The people in lab coats did it, and they were the exact people you were supposed to be able to trust, but you couldn’t because they lied to you a lot, and they still are lying to you. Here’s Tony Fauci from yesterday.

We’re out of the pandemic, says Fauci, and that means you are now free to transfer the hate that you once felt for your unvaccinated neighbors directly to Vladimir Putin and by the way, please do. Dr. Fauci’s orders. Okay, thank you, but wait a second. Even if you’re one of the many people who has recognized for many months that the coronavirus pandemic was indeed over, and who hasn’t known that? Since when did Tony Fauci come to the same conclusion?

Now, the tape you just saw is from yesterday. Okay, but it was just last week – days ago, that this very same Tony Fauci was scolding a federal judge for daring to end the airline mask mandate without his expressed permission. In other words, just days ago, this pandemic was raging – raging so intensely that you had to cover your insolent little face with a useless paper mask as a signifier of your terror and obedience. Those are the rules. Fauci demanded it. Watch.

FAUCI: This is a public health issue and for a court to come in and if you look at the rationale for that, it really is not particularly firm and we are concerned about that, about courts getting involved in things that are unequivocally public health decisions. I mean, this is a CDC issue which should not have been a court issue.

“No democracy here. This is public health. This is a CDC issue. Federal courts have no power. We’ll tell you when you can have your freedoms back, peasant.” That’s what Fauci just said and again, that was just last week and now suddenly this same guy tells us that the dreaded pandemic that ruled our lives for two full years is just gone. It disappeared without even a press release. It is buried in the distant past, stricken from polite conversation like a bad starter marriage.

NEARLY 60% OF AMERICANS HAVE BEEN INFECTED BY COVID-19, CDC REPORTS

We can all pretend it never happened. That was Tony Fauci’s position yesterday in that PBS interview and then today we awoke to sunny skies on the East Coast and a brand-new version of Tony Fauci because, in fact, Tony Fauci explained in yet another interview, this one to the Associated Press, that the coronavirus pandemic is not over. No, not at all. Instead, we’re merely in what he called a “different moment” of the pandemic, but Fauci emphasized with total self-confidence, not a hint of self-awareness, “by no means does that mean the pandemic is over.” Following this?

So yesterday it was over. Today it’s back on. That’s America’s public health establishment, making it up as they go along and yelling at you ceaselessly as they do and as they have for years. Remember this clip from December when Joe Biden informed you gravely that you probably weren’t going to make it through the long winter? Merry Christmas, everyone.

BIDEN: It’s here now and is spreading and it’s going to increase. For unvaccinated, we are looking at a winter of severe illness and death for unvaccinated for themselves, their families and the hospitals they’ll soon overwhelm.

Severe illness and death for the unvaccinated. Ring around the rosie, all fall down. You’re screwed, pal. Woah, five months later, look around, and honestly, it’s hard to find a single pile of corpses in the street. What you see are a lot of perfectly healthy people who did not take the shot and at the same time, you notice an awful lot of vaccinated people died of COVID. What does that mean? Well, it’s not a scientific study, but we can be pretty certain there was a lot of lying going on, quite a bit of overstatement that actually crossed the line into deception.

Tony Fauci admitted as much to The New York Times back in December of 2020, at which point he should have been bounced out of his job and never heard from again. Speaking of timeshares, go to Cabo. Don’t talk to us, but no. Here’s what he said. Dr. Fauci acknowledged that he had slowly but deliberately been moving the goalposts as scientists do. He is doing so, he said, partly based on new science and partly on his gut feeling that the country is finally ready to hear what he thinks. We’re finally ready.

So based on his gut instinct, that’s the science their lecturing us? His gut instinct? Again, that was in 2020, and we let this guy have full control of our purported democracy up until now when he’s telling us one day there’s a pandemic and the next day there isn’t, and the next day there is. You didn’t think you’re ready to hear what he really thinks? “We’re not ready for Tony Fauci. We’re not worthy.” You drive through Washington, D.C., the affluent areas in Northwest D.C., all these signs. “We love you, Dr. Fauci. We worship you. You’re our midget king.” Okay. So why is he changing his tune now?

BIDEN’S PLAN TO END TITLE 42 IS ‘SET UP TO FAIL,’ DEMOCRATS CONTEND

Well, midterm elections are approaching, and it turns out mask mandates and lockdowns aren’t very popular, so we need to get rid of them, says the Democratic Party, but there’s a problem. If we declare that the pandemic is actually over, then we can’t really justify keeping Title 42. What’s that? Well Title 42 is the public health regulation that allows border officials to turn away illegal aliens because they are a danger to the public health because they may have COVID, as many of them do and COVID officially is the scariest thing there is. So, you don’t want anything scary associated with all these brave, new citizens who are going to vote faithfully for the Democratic Party. That’s the idea. So, even the guy in charge of our border security has acknowledged that once Title 42 is gone, the border is going to be flooded with lots of new people moving north. Watch.

MAYORKAS: We are mindful that there can be an increase in migratory flows encountered at our southern border should Title 42 come to an end as the CDC has determined it needs to do by May 23.

So, we’re already at the point where possibly 2 million foreign nationals, none of whom have a right at all to be in this country or use any of our services, probably shouldn’t be here at a time when food and energy are getting scarce, because supply and demand is real.

We’ve already had that. Massive. The largest wave of human migration into our country without authorization ever in our history, but you probably didn’t notice it because it happened in dribs and drabs every single day and then these people were put on planes and flown to Westchester and you didn’t see it, so you’ll tolerate it, but if they drop Title 42, you’re going to get a human wave and not from Mexico or El Salvador – that’s already happened – from the rest of the world.

If that were to happen, the Democrats would be in even deeper trouble than they already are. It probably would guarantee the end of their majority in the Senate, because unrestricted migration, illegal immigration, is about as popular as mask mandates. So, if you’re asking yourself, how could Tony Fauci declare the pandemic over yesterday and back on today, maybe they’re connected. Not a conspiracy now or anything, just throwing that out there, we’ll let you decide.