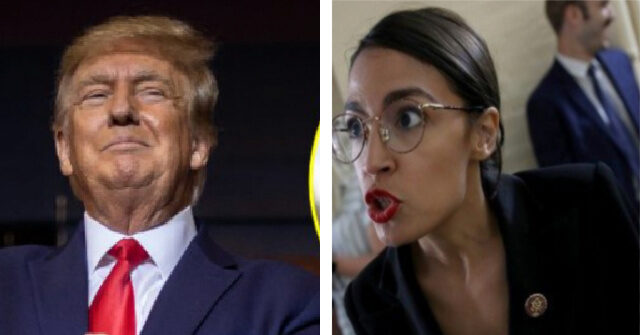 Alexandria Ocasio-Cortez, who some call AOC for short, is again running for Congress, NY-14, and I am thrilled to give her my Endorsement. Even though every one of her ideas, such as the Green New Deal, are terrible and would be a disaster for America, AOC is a great addition to Congress.

Referencing the popular “Blonde AOC” memes, the former president then advised the congresswoman to dye her hair a lighter shade.

“We need a few more AOCs in Congress, if we’re being completely honest. Many people are saying that she should consider going blonde, and after seeing that picture, I have to agree. Take it from me, Alexandria, blondes have more fun!” he concluded.

The former president specifically calling Ocasio-Cortez by her nickname, AOC, aimed to mock a previous statement she made in 2020, implying that Republicans are sexist if they do not call her by her full name:

I wonder if Republicans understand how much they advertise their disrespect of women in debates when they consistently call women members of Congress by nicknames or first names while using titles & last names when referring to men of = stature. Women notice. It conveys a lot.

AOC is a name given to me by community & the people. Y’all can call me AOC. Government colleagues referring to each other in a public or professional context (aka who don’t know me like that) should refer to their peers as ‘Congresswoman,’ ‘Representative,’ etc. Basic respect 101.

AOC is a name given to me by community & the people. Y’all can call me AOC.

Government colleagues referring to each other in a public or professional context (aka who don’t know me like that) should refer to their peers as “Congresswoman,” “Representative,”etc. Basic respect 101

Earlier this week, Trump trolled the Democrats in New York by endorsing candidates in the party’s primary.

“Lawyer Dan Goldman is running for Congress, NY-10, and it is my great honor to Strongly Endorse him,” Trump began. “I do this not because of the fact that he headed up the Impeachment Committee and lost, but because he was honorable, fair, and highly intelligent.”

“While it was my honor to beat him, and beat him badly, Dan Goldman has a wonderful future ahead,” the former president added. “He will be very compassionate and compromising to those within the Republican Party, and will do everything possible to make sure they have a fair chance at winning against the Radical Left Democrats, who he knows are destroying our Country.”