Trump resented having to sign letters for US troops killed in Afghanistan during his presidency because he didn't want to 'attach his name to a war he disliked': book 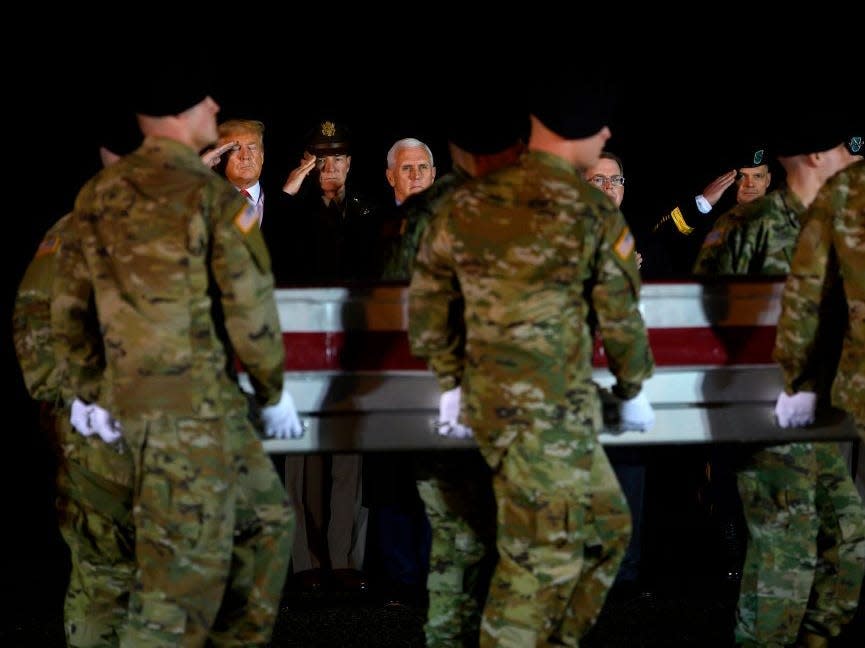 Years before Donald Trump captured the presidency in 2016, he had voiced his strong opposition to the US presence in Afghanistan, railing against a war that began after the terrorist attacks on September 11, 2001 and toppled the Taliban-led government who would emerge victorious in 2021.

In August 2012, Trump tweeted that Afghanistan was “a complete waste” and added that it was time for American troops to “come home.”

But during a March 2016 GOP presidential debate, Trump’s message shifted: “Well, on Afghanistan, I did mean Iraq. I think you have to stay in Afghanistan for awhile, because of the fact that you’re right next to Pakistan, which has nuclear weapons, and we have to protect that.”

However, just a few months into his first term in the White House, President Trump was seemingly uncomfortable with the war in Afghanistan, and he resented having to sign ‘Killed in Action’ letters which, in his mind, linked him to a conflict that he did not personally like but still oversaw, according to a new book by New York Times journalist Maggie Haberman.

In the book, “Confidence Man,” Haberman wrote that Trump, who had generally been focused on North Korea as it related to international affairs, wanted to end the conflict in Afghanistan — but faced resistance.

“He fixated on North Korea and its nuclear capabilities, having his National Security Council draw up a menu of options, from the equivalent of annihilation to total appeasement, and a series of possibilities in between. One high-level option involved personal contact with the country’s reclusive leader, Kim Jong-un, but months passed before that option was visited,” she wrote.

She continued: “Trump cared about fulfilling a campaign promise, but aides were struck that he seemed rattled by the number of deaths involved; over time, he came to resent every ‘Killed in Action’ letter he was forced to sign after a service member died, not wanting to attach his name to a war he disliked and its needless deaths.”

The war in Afghanistan claimed 2,324 American troops, as well as 3,917 contractors, according to Brown University’s Costs of War project, a war fought at the direction of four US commander-in-chiefs, their defense secretaries and the officers who reported to them.

All of these presidents, and they alone, had the power to end US involvement in the war.

Like Trump, Biden pledged to end the conflict and accept the possibility of Taliban victory — which happened so fast it surprised Biden and his top advisors — but it is only Trump who reportedly sought to distance himself from this responsibility to comfort the troop’s family, an emotionally rending task that many presidents have struggled with.

In remarks from October 2019, Trump recounted the difficulties in signing letters to the families of the service members killed in conflicts.

He continued: “And each letter is different. We make each letter different. And last week, I signed of them for Afghanistan; one in Iraq; one in Syria, from 2 weeks ago. And sometimes, I call the parents. I go to Dover, [Delaware] when I can, but it’s — it’s so devastating for the parents that — you know.”

As a candidate and then president, Trump was repeatedly embroiled in controversies centering on families of killed troops. An Army sergeant’s widow said the president forgot her late husband’s name in a condolence call. Trump reportedly questioned the point of a Marine’s sacrifice at his Arlington National Cemetery gravesite to his father. He even suggested that he contracted COVID-19 from a gathering of Gold Star families.

In February 2020, the Trump administration signed a peace deal with the Taliban in Doha, Qatar, setting the framework for a US withdrawal in Afghanistan that would trigger the collapse of the US-backed government.

President Joe Biden would go on to withdraw American troops from Afghanistan, in a process that was widely criticized as chaotic, despite the unpopularity of the war. In August 2021, poll respondents blamed former President George W. Bush for the prolonged engagement more than any other US leader.

Trump, for his part, has harshly rebuked Biden over the withdrawal, despite his administration’s effort to negotiate the abrupt withdrawal that Biden delayed and a lack of planning to evacuate Americans and Afghans who had worked with them.

The issue will surely come up if the two men face off against each other in an anticipated 2024 presidential rematch.