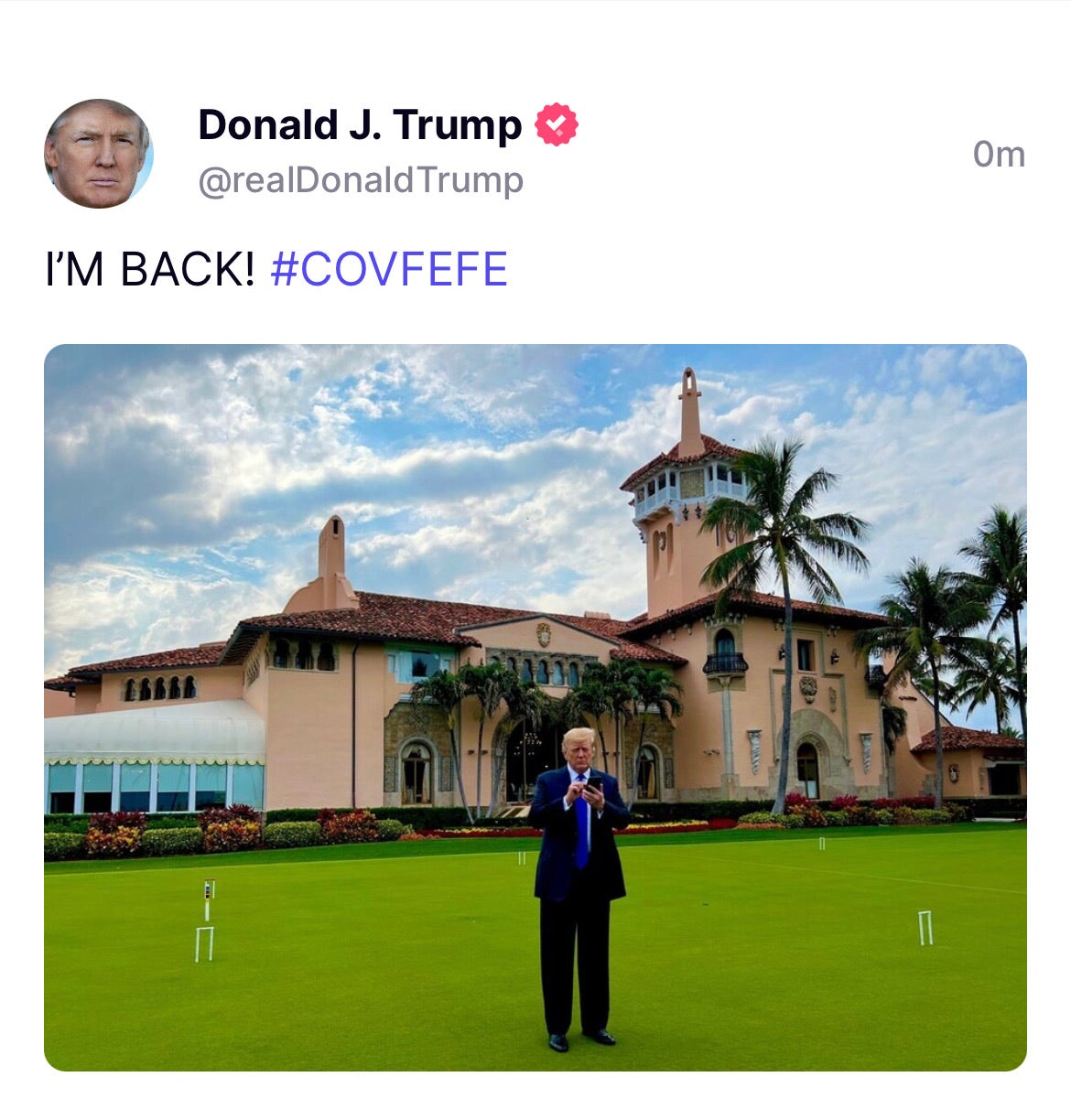 Former President Trump joined his own TRUTH Social on Thursday, posting on a social media platform for the first time in more than a year with a throwback to his now-infamous 2017 typo “covfefe.”

“I’M BACK! #COVFEFE,” Trump posted on TRUTH Social Thursday afternoon with a photo of himself in front of his Mar-a-Lago property in Palm Beach, Florida.

The hashtag “covfefe” was referring to one of his deleted tweets in 2017 in which he decried the media’s coverage of his administration.

TRUMP WILL NOT RETURN TO TWITTER EVEN AS ELON MUSK PURCHASES PLATFORM, WILL BEGIN USING HIS OWN TRUTH SOCIAL

Trump, on Monday, told Fox News he would not return to Twitter, even as Elon Musk purchased the social media company and reinstates his account. Trump said he would, instead, use his own TRUTH Social as the sole platform for his voice.

Twitter, on Monday afternoon, announced it agreed to be acquired by Musk for $44 billion.

“I am not going on Twitter, I am going to stay on TRUTH,” Trump told Fox News. “I hope Elon buys Twitter because he’ll make improvements to it and he is a good man, but I am going to be staying on TRUTH.”

Trump told Fox News on Monday he would begin “TRUTHing” this week.

The Trump Media & Technology Group social media platform, TRUTH Social, formally launched last month and has been up and running under its brand-new cloud services for four days, after having beta-tested since February. Former Rep. Devin Nunes, R-Calif., is the company’s CEO.

“We’re taking in millions of people, and what we’re finding is that the response on TRUTH is much better than being on Twitter,” Trump said. “Twitter has bots and fake accounts, and we are doing everything we can.”

He added: “The bottom line is, no, I am not going back to Twitter.”

Trump was permanently suspended from Twitter, Facebook, Instagram, and Snapchat following the Jan. 6, 2021 Capitol riot. Twitter deemed a number of his tweets connected to the violent protests as inflammatory and warned of “the risk of further incitement of violence.”

When asked whether a Musk-owned Twitter could be competition to TRUTH, Trump said that he feels it would be a positive development in the social media space.

“I think it is good. We want liberty and justice and fairness in our country, and the more we can have open, the better,” Trump said. “But no, I don’t view that as a competition for what I am doing.”

The former president said Twitter “became very boring because conservatives were thrown off or got off the platform when I left.”

“It became boring because there was no interaction,” Trump said. “The interaction on TRUTH has been amazing.”

He added: “We want everybody.”

“TRUTH Social will be a voice for me,” Trump continued. “And that’s something nobody else can get.”