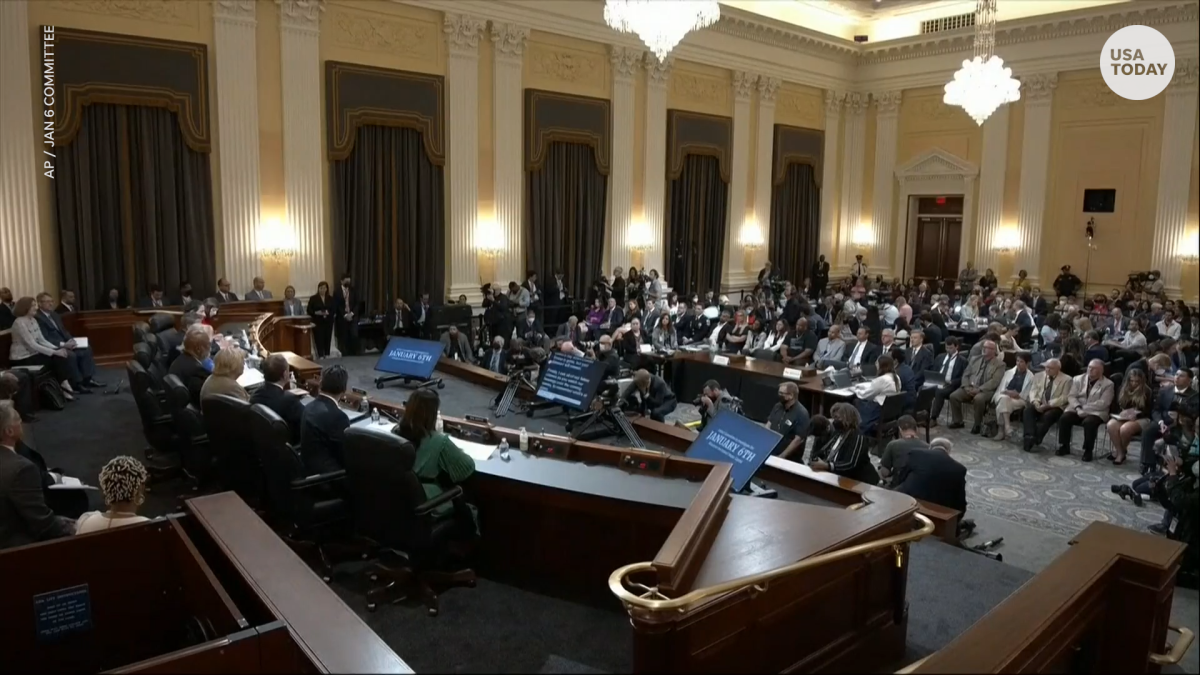 A top White House aide testified Tuesday that former President Trump Donald Trump insisted on allowing armed supporters entry to his Jan. 6 speech and was determined to meet them at the Capitol.

Cassidy Hutchinson, a special assistant to the president, said the Secret Service warned people in the crowd had knives, handguns, rifles, bear spray, spears and body armor – and Trump did not care.

“I don’t care if they have effing weapons,” Hutchinson said Trump told staffers. “They are not here to hurt me.”

Hutchinson, who was the star witness at an unplanned hearing of the House Select Committee investigating the assault on the U.S. Capitol, said Trump and his closest allies planned the events days earlier in efforts to decertify the results of the presidential election.

And when Trump’s security team prevented him from meeting supporters at the Capitol, he became enraged, tried to wrest away the steering wheel of the presidential limousine and grabbed for the throat of a Secret Service agent, Hutchinson said.

Unlike the bulk of her testimony, Hutchinson said the anecdote about Trump’s reaction in the limousine was secondhand, coming from a top member of Trump’s security detail. Hours after her testimony ended, the U.S. Secret Service appeared to push back on the allegations, with some officials suggesting it didn’t happen and were willing to testify.

However, the Secret Service did not officially debunk Hutchinson’s version of events. In a statement Tuesday, its chief of communications said in a written statement: “The United States Secret Service has been cooperating with the Select Committee since its inception in spring 2021, and will continue to do so, including by responding on the record to the Committee regarding the new allegations surfaced in today’s testimony.”

Trump also threw a lunch plate at the wall in a West Wing dining room, shattering it and splattering ketchup over the wall, she told the committee, Hutchinson said.

Trump, in a social media post Tuesday, dismissed Hutchinson as a “total phony” and a “leaker.”

Hutchinson, an adviser to White House Chief of Staff Mark Meadows, worked steps away from the Oval Office, met regularly with congressional leaders and routinely consulted with top administration officials and the Trump family.

“Ms. Hutchinson was in a position to know a great deal,” committee vice chair Rep. Liz Cheyney, R-Wyoming said, adding “she had first-hand observations” on Trump’s conduct before and after the Capitol riot.

Hutchinson told the committee that Trump lawyer Rudy Giuliani on Jan. 2 bragged about “going to the Capitol” on Jan. 6, saying it was “going to be a big day.”

When she reported the conversation to Meadows a short time later, Hutchinson said he told her, “‘Things might get real, real bad on Jan. 6.'”

Hutchinson said White House Counsel Pat Cipollone warned on Jan. 3 that he had serious concerns about the president’s plan to be at the Capitol Jan. 6 and “we need to make sure this doesn’t happen.”

One of the armed Trump supporters in the crowd brandished a spear tip fashioned to a flagpole.

Jake Angeli, the Phoenix man who became the painted face of the riot as he joined bare-chested, showing off elaborate tattoos and wearing a fur hat topped with horns — and holding his spear.

Angeli carried that spear, with a flag zip-tied to it, as he became a reliable presence at protests in the Phoenix area since at least 2019. Angeli carried it into the Arizona House of Representatives lobby in December 2020, as he and about a dozen Trump supporters occupied the lobby of that building for hours in protest of the election results.

Hutchison testified about Trump’s reluctance to release a statement asking the rioters to go home, even as lawmakers, staff members and Fox News Network hosts were imploring him to do so. When he finally did, the crowd in the U.S. Capitol dispersed.

Video from inside the Capitol that day showed Angeli reading the Trump tweet out loud and telling people to go home.

Angeli was among several of the Arizonans who took part in the riot at the U.S. Capitol said they were motivated to travel to D.C. out of loyalty to Trump and feeling they were joining him in a battle to right the election wrong.

One man from the northern Arizona town of Cottonwood, Nathan Entrekin, 49, wrote in a letter to a federal judge ahead of his sentencing said he attended to “protest the November 3, 2020 election results and, somehow, someway, sway the minds of Congress.

Entrekin joined the riot dressed in a gladiator costume meant to invoke Captain Moroni, a figure from the Book of Mormon.

Tuesday’s hearing was a surprise, coming days after the committee held its fifth hearing. The panel had planned to break until next month while it reviewed new evidence.

Arizona House Speaker Rusty Bowers, R-Mesa, testified about pressure he received from Trump and his attorneys, including Rudy Giuliani, to somehow have the Legislature notch the state as a win for Trump. The certified election results showed Biden carried Arizona, only the second Democrat to do so since Harry Truman in 1948.

That same hearing, on June 21, unspooled the saga of how seven states, including Arizona, sent up competing slates of electors to the U.S. Senate with the thought that they could give Vice President Mike Pence reason to delay the election certification, or declare Trump the winner.

Pence refused to go along, which, testimony showed, sparked anger among the crowd gathered outside the Capitol.

In last Thursday’s hearing, a former aide to Mark Meadows, who was Trump’s chief of staff, was shown testifying in a deposition that Rep. Andy Biggs, R-Ariz., was among members of Congress who had asked for a preemptive presidential pardon. Biggs denied that he did.

Despite Trump’s claim Tuesday that he hardly knew Hutchinson, he also said he personally turned down her request to travel with other former staff members to Florida after Joe Biden’s inauguration.

Trump said he had only heard “very negative things about her.”

Trump did not address any of Hutchinson’s claims directly in his social media posts.

This is not the first time he has dismissed individuals, including key members of his administration, who are critical of him. He has repeatedly claimed he can’t remember them or has said they aren’t important.

“Why did she want to go with us if she felt we were so terrible,” Trump said in a post. “I understand that she was very upset and angry that I didn’t want her to go, or be a member of the team. She is bad news!”

Help us fight for you and support local journalism. Subscribe to azcentral.com today.