TikTok user slammed for dumpling restaurant review: ‘I used to hear they were made of rats’ 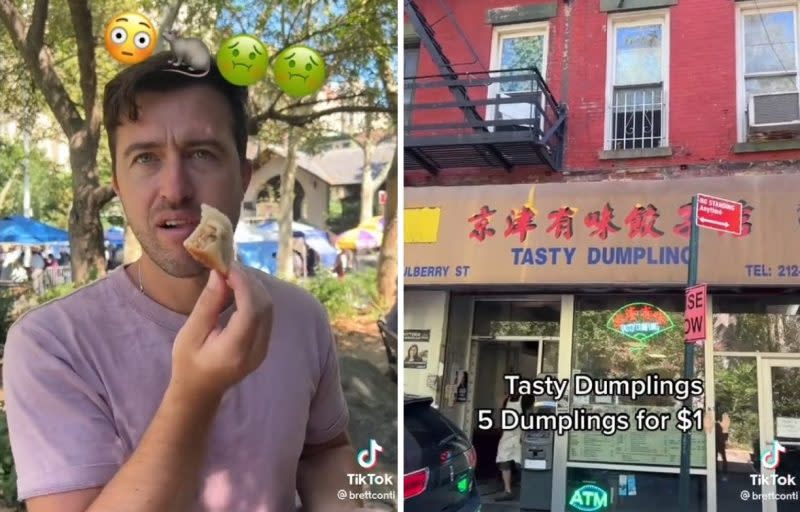 A TikTok user has sparked controversy online for his review of a dumpling restaurant in New York City.

In a now-deleted video by TikTok user @brettconti that has since been reposted on Twitter, Conti presents the restaurant Tasty Dumpling as “how I survived living in New York City when I was broke.” He says the Chinatown establishment sold five dumplings for a dollar when he used to frequent it six years ago.

Walking toward the restaurant’s entrance, Conti points at its sign and says, “This sign definitely used to be yellow, now it’s a little brown,” with a “disgust” emoji added to the footage. As he reaches the front window, Conti expresses disbelief as he points out that the price of the “dollar dumplings” has since been raised to $2.

After purchasing his food, Conti sits in what appears to be a nearby park and reviews the dumplings.

“Honestly, not bad,” he says. “I used to hear that they were made out of rats, but they taste good.”

Twitter users were outraged at Conti’s video, with some calling his review “casual racism.”

“What’s a little casual racism while eating the ethnic food of said country. Just kidding, he was probably raised that way,” one user wrote.

“He knows exactly what he’s doing too… first take probably said dog meat and he was like no no thats too much,” another user commented.

On its website, Fortune sells a “Black Oriental Hoodie” with a cherry blossom design, “Black Take Out Socks” adorned with Chinese take-out boxes and a “Good Fortune Tee” featuring a maneki-neko.

The reposted video has garnered over 165,000 views on Twitter as of this writing.