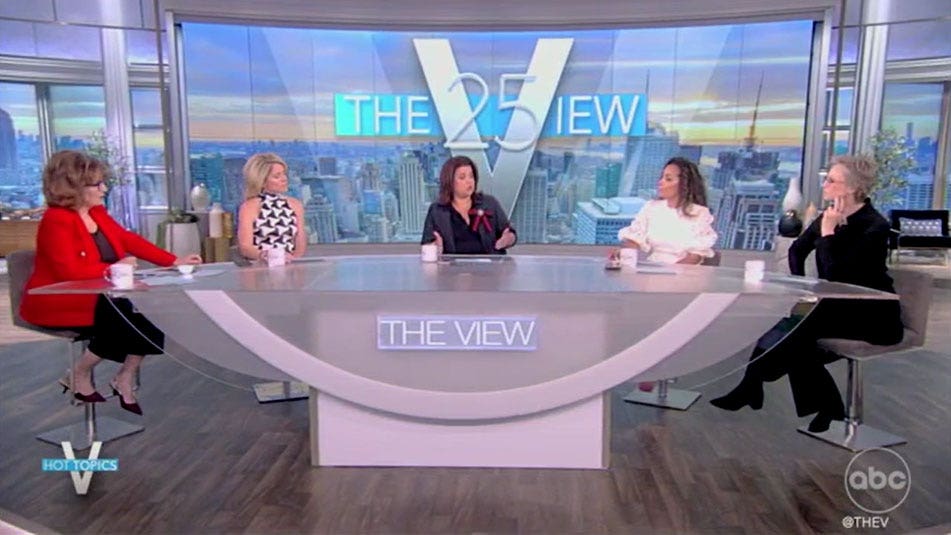 The co-hosts of ABC’s “The View” railed against Republicans over their support for parental rights laws Friday, claiming the party’s platform isn’t “in line with American values” and accusing it of trying to “target marginalized people.”

The liberal co-hosts claimed, during a segment focused on the bills in a number of states limiting what can be taught to young children in schools regarding gender and sexuality, that past Republican “fear” about gay marriage had now morphed into “fear” about children being “groomed,” “sexualized,” and “indoctrinated into being gay.”

“The LGBT community has been making strides fighting for their rights in America for years, but the GOP has introduced a slew of ‘don’t say gay’ style bills that target the community. They’re even accusing the left of grooming children to become gay, as if you can do that,” co-host Joy Behar began.

After playing the clip, she declared that Republicans “have no policies,” and noted unnamed statistics showing that Americans had become “much more accepting of the gay community.”

“So the country is evolving. Apparently the GOP is not,” Behar claimed.

Co-host Ana Navarro claimed that Republicans were using “fear and phobias and paranoias” because it had worked for them politically, but that they could no longer do it with gay marriage.

She turned to guest co-host and actor Jane Lynch, who is gay, and asked if children could “be indoctrinated into being gay or being straight.”

Co-host Sunny Hostin claimed the problem was an issue with Republican Party’s ability to connect with voters.

“I think this is because the Republican Party doesn’t really have a platform that is in line with American values,” she said. “When you don’t have a platform, you do have to resort to fear, and this is just cyclical and it’s out of their playbook.”

She then turned the issue to race and quoted former President Lyndon Johnson to explain why, according to her, Republican voters would support such policies.

“I think LBJ said it best. He said, ‘If you can convince the lowest White man he’s better than the best colored man, he won’t notice you’re picking his pocket. Hell, give him somebody to look down on, and he’ll empty his pockets for you.'”

“We saw this happening with [critical race theory], right? Don’t let — let’s just target Black and Brown people. Once they were successful doing that, the next group, the LGBTQ+ community. They try to target marginalized people,” she added.

Behar questioned why Republican voters were “falling” for it and claimed they were “voting against their own interests.”

“The Democratic Party is trying to help them with their lives,” she declared.