The RNC is promoting Trump and his business, raising fresh concerns about its neutrality 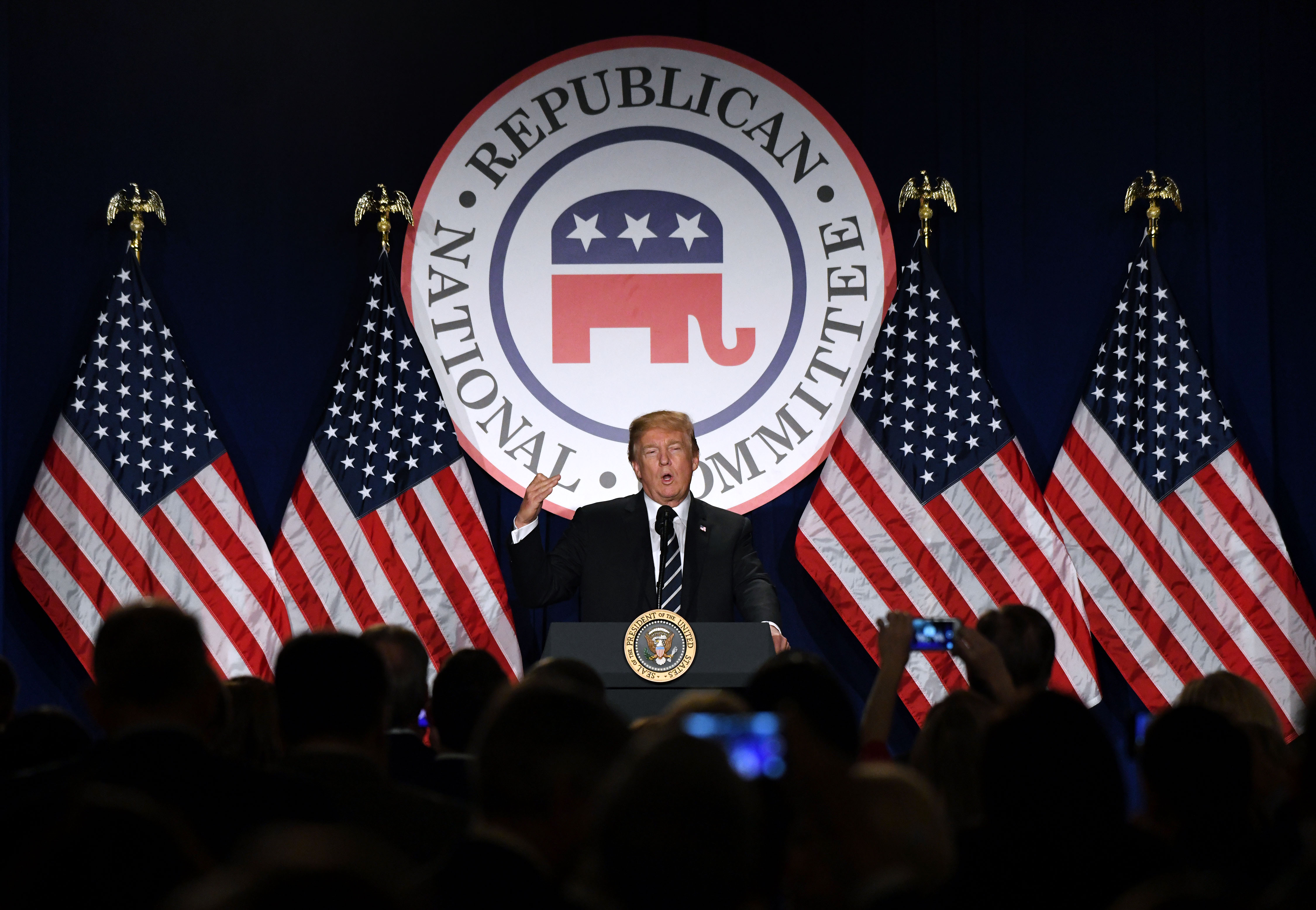 “How do you stay neutral when the single greatest driver of raising money is using Trump’s name?” asked one former party official, who remained anonymous to offer a candid perspective.

Having a former president in the mix for a future presidential run is uncharted territory for the RNC. In multiple interviews, Chair Ronna McDaniel has made clear she and the party plan to remain “neutral” during the primary season. In a sign of their commitment to not picking sides, the RNC passed a rule to bring back primary debates, giving candidates an equal advantage, and the presidential nominating process remains identical to 2016, among other things.

But behind the scenes there have been conversations at the upper ranks about the quagmire presented by a potential Trump run alongside concerns the committee is already too tied to the 45th president.

Trump’s name, smiling blonde head, quotes, and political record are all regularly featured in fundraising appeals from the RNC. His photo is often on the banner image of the emails the committee sends to its small donor lists. Trump’s social media venture, Truth Social, has been mentioned in close to 40 emails from the RNC campaign account this past year.

Fundraising emails have been sent out by other potential candidates and prominent party surrogates, like former Vice President Mike Pence and Florida Gov. Ron DeSantis, but hardly with the same magnitude as those from Trump. The committee’s campaign email account has sent just one email under DeSantis’ name since 2021. So far, in July, it’s sent two from the name “Trump Social Media Alert.”

“I think Trump looks at the RNC as a wholly owned subsidiary and he should, they are nothing without him. He has all the base and all the money,” said a Republican operative close to Trump. “Neutral — how can they be neutral when he is not simply the main driver but the only driver?”

Perhaps the best example of the bind the RNC now finds itself in came on July 4, when the committee’s Twitter account published quotes from past Republican presidents. Included in that was a video of Trump. It was a natural clip for the RNC to share alongside patriotic messages from Ronald Reagan and George W. Bush. But it also gave Trump a platform that other GOP presidential aspirants couldn’t get.

“The job of the RNC is to represent all Republicans who are running for office — all the way up — and in the contested presidential race, they have to remain neutral and not take sides or they are breaking their bonds with the members of the committee,” said former RNC Chair Frank Fahrenkopf, who led the party when then-Vice President George H.W. Bush faced opponents from his own party like Bob Dole. “I don’t know what they will do, if for example, there is another candidate that runs and Trump runs again. I think he has tremendous control over the RNC.”

Concerns over the RNC remaining neutral are not new. But as expectations build that Trump could launch a presidential run before the Nov. 8 midterm election, extra scrutiny has been given to McDaniel, who remains in regular contact with Trump. Trump has even encouraged McDaniel to stay on as party chair for a fourth term.

“The bylaws of the party are you have to remain neutral, that’s just the way the RNC’s written” McDaniel told reporters during a Christian Science Monitor breakfast last year. “We’re focused on 2022.”

A spokesperson for the RNC declined to comment on the record.

Already, some in the party have raised concerns about McDaniel’s commitment to neutrality. Some pushback came last February, after the committee approved a resolution led by Trump ally and RNC committee member Dave Bossie that censured Reps. Liz Cheney of Wyoming and Adam Kinzinger of Illinois, the two Republican members of Congress serving on the House committee investigating Jan. 6. Trump has called the probe a “political witch hunt.”

The response was more muted to the RNC’s decision to pull out of debates hosted by the Commission on Presidential Debates, the primary organizer of general election presidential debates, on allegations it is “biased.” But that move, too, was seen in certain quarters as done at the behest of Trump.

“In terms of neutrality it’s more in terms of what the RNC and members can do in terms of simply promoting someone’s candidacy versus supporting somebody’s candidacy. Someone might think that’s a semantic difference but it’s not. I do believe that the RNC has been promoting former President Trump in a way that some members are uncomfortable with,” said Bill Palatucci, a national committeeman from New Jersey who says he falls in the “anyone but Trump camp” for 2024 GOP nominees.

“He was the one who put the chairman in office when he was first elected and supported her and I think there could be a lot of pressure on her and the committee should she be urged by partisans to take a position one way or the other in the primary,” Fahrenkopf said.

Others interviewed for this story pointed to the RNC paying Trump’s legal bills and the heavy use of the former president’s name and face in fundraising appeals as cause for concern about whether the RNC can be a fair arbiter of the upcoming presidential primary.

Still, McDaniel remains a popular leader for the GOP, and maintains broad support among committee members and state party leaders. And there is a sense that the issue of neutrality could end up being less of an internal debate at the RNC and more of a media brouhaha.

“I am fully confident that the chairwoman will stay neutral,” said Frank Bordeaux, Mississippi Republican Party chair. “This is a primary season where we have an open seat and we have a lot of popular possible potential candidates as far as the Republican Party, but for the Democrat Party they’re in a more difficult position where they have a sitting president who will probably be challenged by their own party.”

Trump has dropped hints to his supporters that he plans to announce a 2024 run. But he has been warned by top party leaders not to announce a run before the midterms. A premature announcement, they say, would suck money and momentum away from Republican candidates and the ex-president would be blamed for any losses. And due to campaign finance rules and regulations, the RNC would no longer be able to pay legal bills for Trump should he formally enter the 2024 race.

There has also been frustration among top Republicans that while Trump muses about another presidential run, he has not spent more of the over $100 million sitting in the coffers of his Save America political action committee in support of 2022 candidates.

Right now, the RNC and its members want to focus on a successful 2022. And they’d like Trump’s attention to stay there, too.

“The party has to be neutral and it will be neutral. I expect we will have plenty of people who will consider running because there’s going to be a huge opportunity but I think the key is going to be that we stay focused on 2022 and win the House and the Senate and that will set us up for getting the country back on the right track,” said Henry Barbour, a national committeeman from Mississippi.