The Politics of Fear Show No Sign of Abating 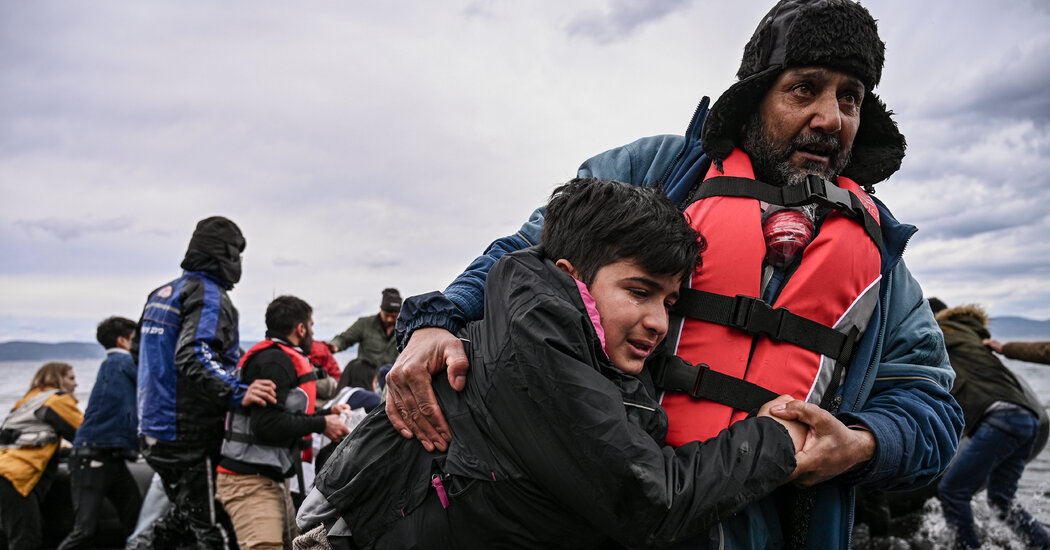 If this logic holds true, we have entered a new moral universe.

Morteza Dehghani, a professor of psychology and computer science at the University of Southern California, emailed that he and his colleagues have found that “extreme behavioral expressions of prejudice against marginalized groups could be understood as morally motivated behaviors grounded in people’s moral values and perceptions of moral violations.”

Across five studies, ranging from geospatial analysis of 3108 U.S. counties to social psychological experiments with over 2200 participants, we found evidence that group-level moral concerns (i.e., loyalty, authority, and purity) are predictive of extreme behavioral expressions of prejudice even after controlling for county-level confounders, such as political ideology.

The moral legitimization of violence is the focus of Alan Fiske, a professor of anthropology at U.C.L.A., and Tage Shakti Rai, a psychologist at the University of California-San Diego, in their 2014 book, “Virtuous Violence: Hurting and Killing to Create, Sustain, End, and Honor Social Relationships.”

They write that violence is

considered to be the essence of evil: it is the prototype of immorality. But an examination of violent acts and practices across cultures and throughout history shows just the opposite. When people hurt or kill someone, they usually do so because they fell they ought to: they feel that it is morally right or even obligatory to be violent.

Fiske and Rai argue that people “are morally motivated to do violence to create, conduct, protect, redress, terminate or mourn social relationships with the victim or with others. We call our theory virtuous violence theory.”

Political conflict, scholars have found, can move into the zone of morally justified violence when elected officials and candidates focus their campaigns on grievance. As Ditto put it by email:

When groups interact with each other, exchange things, this creates the potential for feelings of grievance to develop — they screwed us in some way. Once you feel that a group has wronged you or your group, then you are in moral territory.

In a February 2021 paper, “Populism and the Social Psychology of Grievance,” Ditto and Cristian G. Rodriguez, a professor of psychology at the Universidad de los Andes, in Chile, write: “Populist political movements seek to gain power by leveraging feelings of grievance, a sense that ‘the people’ have been treated unfairly by ‘the elite.’” Evoking past grievance, they write, “has two clear collateral costs: it can be used to justify undemocratic means to gain political power, and its evocation risks initiating a self-escalating cycle of inter-factional political conflict.”

As conflicts escalate, so do the perils of grievance politics:

Feelings of grievance can lead people to feel licensed to abandon previous moral and procedural constraints. Although sometimes these constraints feel arguably bendable, abandoning other moral rules, such as adherence to democratic political tactics or prohibitions against violence, can be substantially more problematic. Research on highly contentious and moralized political environments has found them to foster an increased willingness to condone undemocratic means to achieve desired political ends, up to and including violence. In the U.S., partisan anger is associated with tolerance of cheating, lying and voter suppression as acceptable political tactics.

I asked Ryan Enos, a political scientist at Harvard, how partisanship can become moralized, legitimating opposition and even violence. He replied:

Politics plays a tremendous role in this. It is politicians who give action to latent attitudes and can organize collective action or even harness the power of the state. For example, Trump supporters might have had a latent tendency to be opposed to immigration but when Trump comes along and tell them that we need to “build a wall,” this made them think that immigration must really be a problem and, so, this latent tendency is activated. Then, when the state gets involved in building this wall and aggressively enforcing immigration, it brings power and action to these tendencies.

seems to be tightly related to a person’s larger worldview, so that a person that tends to be right-wing will also tend to have hostility to immigration and a person who is left-wing will tend to be more open. Scholars don’t agree on how to characterize the differences between these worldviews, but notice that much of the language used to describe the differences has implications for acceptance of immigrants — for example, people on the right are described as seeing the world has ‘threatening’ or having a ‘closed’ worldview.

Peter Howley, a professor of behavioral economics at Leeds University, shared Enos’s view of the crucial role of closed and open mindedness. “Openness is strongly correlated with immigration attitudes,” Howley wrote in an email, “and our own research demonstrates how openness strongly moderates the relationship between inflows of migrants into one’s local area and the self-reported well-being of existing residents.”

captures the degree to which people are attracted by novel stimuli and entails a preference for variety and new experiences. For people comparatively low on openness, demographic change and all it entails from exposure to new cuisine, music and amenities may be a daunting prospect but for people with high scores on openness, demographic change offers the potential for exiting new experiences.

The political scientists Christopher D. Johnston of Duke and Howard G. Lavine and Christopher M. Federico, both of the University of Minnesota, write in their book “Open Versus Closed”:

As partisan conflict has been extended to cultural and lifestyle issues, engaged citizens have organized themselves into parties by personality, a process we refer to as “dispositional sorting.” In particular, those with “closed” personality traits have moved into the Republican column over the past few decades, and those with “open” traits have become Democrats. More generally, open citizens now take their economic policy cues from trusted elites on the cultural left, while closed citizens adopt the positions of those on the cultural right.

The conflicts within this country reflect in miniature the global tensions of the 21st century. Sciubba puts the predicament in context in her introduction to a new collection of essays, “A Research Agenda for Political Demography.”

In high- and middle-income countries, the most recent transition is to extremely low fertility and low mortality, leading to a shift in the composition of various age groups — far more elderly than youth and declining proportions of those in the middle ages. For the world’s most developed countries, national goals of economic growth of 2 percent or more are mismatched with shrinking populations — the idea of infinitely expanding economies is rubbing up against demographic reality. In some states with low fertility, immigration is eroding the advantages of longtime ethnic majorities and political tensions are high. Rising support for anti-immigrant far right parties and populists, particularly in the USA and Europe, are demonstrations of the connection between demographics and politics.

At the other extreme:

In lower-income countries, fertility remains high, but declining mortality means that these populations are growing exponentially — a different transformation. Population density is increasing as the amount of available land stays constant and the number of people who inhabit it grows two- or threefold. Climate change is accelerating strains on the land itself, and economic forces like globalization are restructuring economies, often toward production for export, rather than for subsistence. Economic crises too often turn into civil conflict, which then pushes populations into new communities and across borders, and creates a new set of problems for both senders and receivers.

By this reasoning, the prospect, globally, is for worsening conflict between rich and poor countries and between the rich and the poor within countries. In many respects, politics is about organizing fear. Democracies break down and republics dissolve when fear is used too often as a motivating tool, a partisan weapon. The issue now is whether the political system can begin to organize our fear of each other in a constructive fashion that resolves rather than exacerbates conflicts.