Takeaways From Tuesday’s Hearing by the Jan. 6 Committee 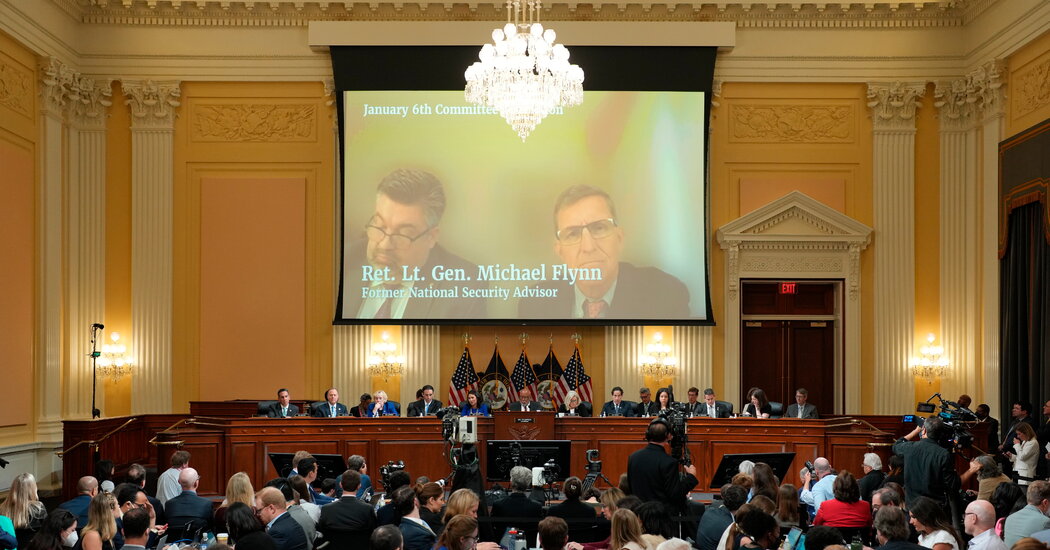 The seventh public hearing by the House committee investigating the Jan. 6 riot focused on how Donald J. Trump and his allies turned their efforts toward summoning a mob of his supporters to Washington to protest the certification of the election after they had exhausted all legal avenues. Relying on testimony from Trump aides, right-wing media commentators and militia members, the committee demonstrated how Mr. Trump’s public statements led his supporters to believe the election had actually been stolen and storm the Capitol in an attempt to stop the certification.

Here are the four main takeaways from the hearing:

In the early morning hours of Dec. 19, 2020, Mr. Trump put out a tweet calling on his supporters to come to Washington on Jan. 6.

The committee demonstrated how the tweet served as a rallying cry for Mr. Trump’s supporters — including extremist organizations and right-wing media commentators.

They immediately begin whipping up support, both within far-right groups like the Oath Keepers and the Proud Boys and among ordinary citizens who believed Mr. Trump’s lies about the election. And in many cases, the online commentary that followed what Mr. Trump’s supporters heard as a call to arms was infused with talk of violence.

“We are going to only be saved by millions of Americans moving to Washington, occupying the entire area, if necessary, storming right into the Capitol,” Matt Bracken, a right-wing commentator, said in a video clip posted soon after Mr. Trump’s tweet and played on Tuesday by the committee. “We know the rules of engagement. If you have enough people, you can push down any kind of a fence or a wall.”

Once the crowd came to Washington, testimony on Tuesday showed, Mr. Trump’s supporters continued to take their cues from him.

“I was hanging on every word he was saying,” said one supporter, Stephen Ayres, who has pleaded guilty to a misdemeanor charge of disorderly and disruptive conduct for his role in attacking the Capitol.

Mr. Ayers said that he had not planned to rush the Capitol but decided to do so after hearing Mr. Trump address the crowd on the Ellipse, near the White House.

“Well, basically, you know, the president, you know, he got everybody riled up, told everybody to head on down, so we basically were just following what he said,” Mr. Ayers said.

Mr. Ayers said that he was angry because he was convinced the election had been stolen and something had to be done to right that wrong. He said that the crowd believed Mr. Trump was going to meet them at the Capitol.

Key Revelations From the Jan. 6 Hearings

“I think everybody thought he was going to be coming down,” Mr. Ayers said. “You know, he said in his speech, you know, kind of like he’s going to be there with us. So I mean, I believed it.”

New Evidence Showed Plans to Go to the Capitol

The committee presented new evidence that showed Mr. Trump and his allies had more extensive plans than previously known for him and his supporters to go to the Capitol on Jan. 6.

Documents obtained by the committee showed that a tweet was drafted for Mr. Trump — which he saw — that called on his supporters to march to the Capitol after his address.

“Making a big speech at 10:00 A.M. January 6 south of the White House,” the draft tweet said. “Please arrive early. Massive crowds expected. March to the Capitol after. Stop the Steal!!”

The tweet was never sent, but the committee suggested it was just one piece of evidence showing that, in the days leading up to Jan. 6, Mr. Trump and his allies had discussed plans for him to go to the area around the Capitol after the rally on the Ellipse.

The committee showed a text message that a Trump ally, Michael J. Lindell, the head of the company My Pillow, had received from a rally organizer on Jan. 4 in which the organizer said that a second stage was going to be set up at the Supreme Court, across the street from the East Front of the Capitol.

The rally organizer, Kylie Kremer, wrote: “It cannot get out about the second stage because people will try and set up another and Sabotage it. It can also not get out about the march because I will be in trouble with the national park service and all the agencies but POTUS is going to just call for it ‘unexpectedly.’”

Other text messages sent around that time showed that right-wing activists also believed Mr. Trump would be joining them as they massed at the Capitol.

“Trump is supposed to order us to the capitol at the end of his speech but we will see,” said Ali Alexander, who led the “Stop the Steal” campaign.

The committee also cited a deposition by the White House photographer, Shealah Craighead, who was present at an Oval Office gathering on the evening of Jan. 5, when Mr. Trump and some of his aides could hear a crowd of his supporters who were gathered nearby. Ms. Craighead testified that Mr. Trump was saying, “We should go up to the Capitol. What’s the best route to the Capitol?”

Four days after states voted in the Electoral College, essentially ending all legal challenges to Joseph R. Biden Jr.’s victory, a group of Mr. Trump’s outside advisers were hustled into the West Wing to meet with Mr. Trump in the Oval Office. The advisers — including the lawyer Sidney Powell and Michael T. Flynn, the retired general who had served briefly as Mr. Trump’s national security adviser — came armed with draft executive orders they wanted Mr. Trump to sign that would have used the Defense Department to seize voting machines to try to prove baseless claims of election fraud.

Shortly after the meeting began, the White House counsel, Pat A. Cipollone — who did not believe the election had been stolen and had been pushing for Mr. Trump to concede — learned of it and rushed into the Oval Office so fast that Ms. Powell said he set “a new land speed record.”

“I opened the door and I walked in and I saw General Flynn, I saw Sidney Powell sitting there — I was not happy to see the people who were in the Oval Office,” Mr. Cipollone said in videotaped testimony he provided the committee last Friday, clips of which were played in Tuesday’s hearing.

Mr. Cipollone testified that he turned to one of the advisers he did not know and asked his identity. He turned out to be the founder of Overstock.com, Patrick Byrne. “I don’t think any of these people were providing the president with good advice,” Mr. Cipollone said.

“There is a way to contest elections that happens all the time, but the idea that the federal government could come in and seize election machines? No — I don’t understand why I even have to tell you why that’s a bad idea,” Mr. Cipollone testified. “It’s a terrible idea.”

In the hours that followed, a meeting ensued that is considered among the most contentious of Mr. Trump’s presidency, as Mr. Cipollone and other White House lawyers, including Eric Herschmann, faced off against Ms. Powell, Mr. Flynn, and Mr. Byrne.

“At times, there were people shouting at each other, hurling insults at each other. It wasn’t just people sitting around on a couch chitchatting,” said Derek Lyons, who was then the White House staff secretary.

Ms. Powell testified that she thought Mr. Trump had appointed her as a special counsel to investigate the election fraud claims. But the testimony played by the committee revealed that Mr. Cipollone strongly objected to such a move and essentially killed it by refusing to do the paperwork needed for such an appointment.

After all the fighting between the outside advisers and the White House lawyers, Mr. Trump declined to go along with the plan of using the military or other federal agencies to seize the voting machines.

Hours later, he would turn to Twitter to post his call to his supporters to come to Washington on Jan. 6.

As she did at the end of the previous hearing two weeks ago, Representative Liz Cheney, the committee’s vice chair, warned against witness tampering in her closing statement — and this time her message was aimed directly at Mr. Trump.

Ms. Cheney said that a witness — whom she declined to identify other than to say the person’s testimony had not been made public so far — had gotten a call in the last two weeks from Mr. Trump. The witness, Ms. Cheney said, received the call after the last hearing, in which Cassidy Hutchinson, a former West Wing aide, provided damning testimony about Mr. Trump.

Ms. Cheney said that the witness declined to pick up Mr. Trump’s call or respond to it. But the witness told his or her lawyer, who alerted the committee. The committee then passed the information along to the Justice Department, which on Tuesday declined to comment.

“Let me say one more time, we will take any effort to influence witness testimony very seriously,” Ms. Cheney said.

After Ms. Hutchinson’s public testimony on June 28, the committee disclosed efforts by Trump allies to reach a witness, who turned out to be Ms. Hutchinson.

On Tuesday, a spokesman for Mr. Trump said on Twitter that Ms. Cheney was trafficking in “innuendo and lies,” but did not directly address whether Mr. Trump had tried to reach out to a witness.