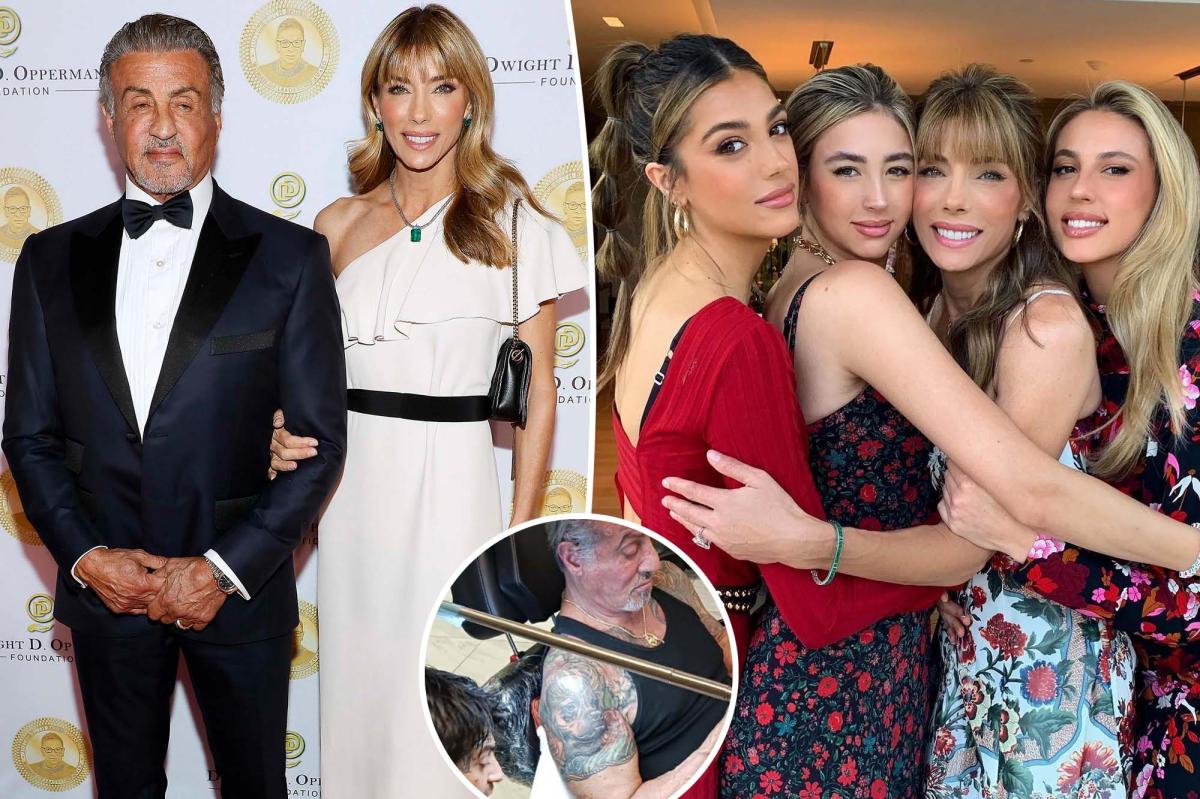 Is Sylvester Stallone in the dog house?

The Hollywood legend, 76, recently headed for a coverup job of his huge bicep tattoo, replacing an image of his wife, Jennifer Flavin, with one of a four-legged friend — but a rep for the star insists there’s no deeper meaning behind it.

Stallone, who is filming the upcoming Paramount+ series “Tulsa King” in Oklahoma City, entrusted local tattoo artist Zach Perez to do some work on his arm, with the pro sharing now-deleted Instagram photos of himself inking Butkus, the famous bull mastiff from the “Rocky” movies, over Flavin’s face.

The original art — which was still visible in an Instagram photo the “Expendables” star posted earlier this month — featured the model’s head surrounded by roses, and the new image shows Rocky’s pooch in its place.

“Greatest day in my tattoo career!!” Perez wrote on August 16 (which happens to be two days after Flavin’s birthday). “Thank you for trusting me with your tattoo today @officialslystallone.”

After followers started asking the artist why Stallone’s wife of 25 years was getting covered up, the photos disappeared.

One fan commented on Stallone’s Instagram, writing, “what about the new ink of Butkus on your shoulder? That looks awesome. Did your wife mind? Mine would’ve killed me. Lol.”

The dog tattoo wasn’t the only thing raising questions about the state of the Stallone-Flavin marriage.

Last week, the 54-year-old — who is no longer following her husband on Instagram — posted a photo hugging her three daughters, writing, “These girls are my priority [heart emoji] nothing else matters. The 4 of us forever.”

She added the hashtags “truth,” “family” and “forever” to the snap, which garnered plenty of positive comments — including one from daughter Sistine, who wrote, “Strongest woman I know.”

While the tattoo switch up has been making headlines, the actor’s publicist Michelle Bega told the Daily Mail, it was all a misunderstanding.

“Mr. Stallone intended to refresh the tattoo image of his wife, Jennifer, however the results were unsatisfactory and, unfortunately, unfixable,” she said. “As a result, he had to cover the original image with a tattoo of his dog from ‘Rocky,’ Butkus.”

The rep added that “Mr. Stallone loves his family” and they “are presently filming a reality show together which will debut on Paramount+.”

Stallone has yet to debut Butkus on his frequently-updated Instagram account, but we have a feeling fans will be eager to hear the story behind his botched coverup.