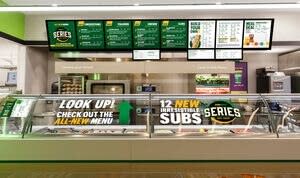 Subway plans to give away one million free sandwiches on Tuesday in celebration of its biggest menu change in 60 years.

Customers can visit restaurant locations across the United States from 10 a.m. to 12 p.m. to score a complimentary “Subway Series” sub.

“The Subway Series is the most ambitious undertaking in company history, as we are changing the nearly 60-year-old blueprint that helped make Subway a global phenomenon,” said Trevor Haynes, President of North America at Subway. “Last summer’s Eat Fresh Refresh laid the foundation to build a better Subway, and now the Subway Series enhances the entire Subway guest experience.”

Subway also introduced a new menu and ordering system that makes it easier for guests to order. Instead of picking your ingredients and toppings throughout the ordering process, guests can now simply say a sandwich number or name and six-inch or footlong.

Full sandwich ingredients can be found at Subway.com.