Stunning spread of BA.5 subvariant shows why this California COVID wave is different 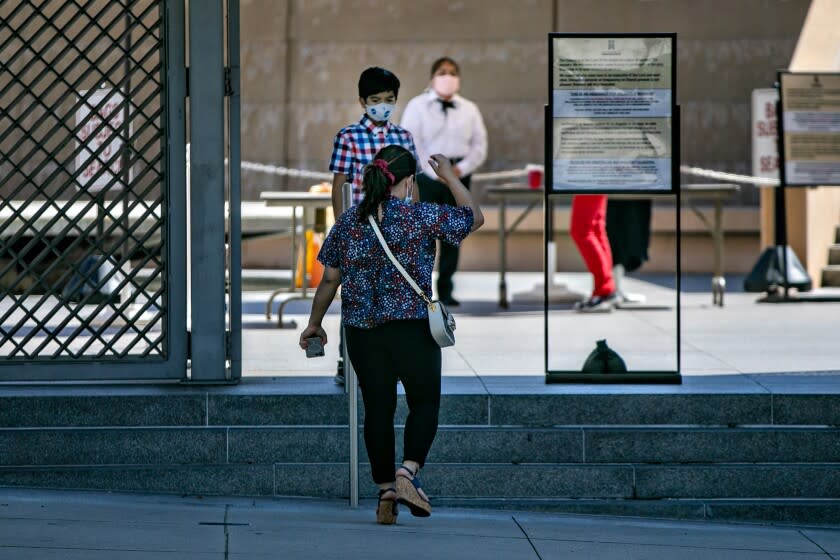 With California suffering through another intense coronavirus wave, the stunning proliferation of the BA.5 subvariant is becoming a growing focus of scientific scrutiny, with experts saying it may replicate itself far more effectively than earlier versions of Omicron.

Compared to its ancestors, the latest Omicron subvariant, BA.5, may have an enhanced ability to create a large number of copies of the coronavirus once it gets into human cells, a possible contributing factor for why this summer’s Omicron wave has been problematic.

BA.5, which in the estimation of federal health officials is currently the dominant version of the coronavirus nationwide, is arguably combining aspects of last summer’s Delta variant with older versions of the highly contagious Omicron family, said Dr. Eric Topol, director of the Scripps Research Translational Institute in La Jolla.

“You may remember the term ‘Deltacron’ prematurely used many months ago in the pandemic. But the ability to infect cells for BA.5 is more akin to Delta than the previous Omicron family of variants,” Topol wrote in a blog post.

In many ways, this wave of the pandemic has felt different from other Omicron waves earlier this year. Health experts say the behavior of the ultra-contagious strain shows the need for prudent precautions.

Citing a preprint report out of Australia, Topol referred to data in a lab study that suggested BA.5 was found to produce far more copies of the coronavirus when compared with an earlier Omicron subvariant, BA.2.

“There are more copies of the virus because BA.5 has far better ability to get into cells … which may help explain why this version of the virus has caused a lot of trouble, more than other Omicron subvariants,” Topol wrote in his post.

If BA.5 retains its position as the main dominant variant for a while, that could eventually stabilize the situation in California and eventually point to a situation where there will finally be a downturn in cases, said Dr. Peter Chin-Hong, an infectious-diseases expert at UC San Francisco.

But a possible wrench in that scenario is the emergence of yet another Omicron subvariant, BA.2.75, which has raised concerns in India.

“And I know, it’s super discouraging,” Chin-Hong said. Still, he said, there are ways to live life while taking steps to reduce risk.

Common steps public health officials recommend include staying up to date on vaccinations and boosters, testing before attending gatherings or events, and wearing masks when in indoor or crowded public settings.

Separately, BA.5 seems to be doubling down on earlier Omicron traits of “immune escape,” the ability of the virus to escape the human body’s immune response induced by vaccinations or previous infection.

The first Omicron subvariant, BA.1, which spread quickly in the U.S. after Thanksgiving, already had dozens of mutations that made it harder for our immune systems to recognize it.

“So what’s now happened is that, with BA.5, it has superimposed mutations on top of BA.1 that make it even more difficult for our immune system to recognize,” Topol said.

Also troublesome were initial data in the Australian study suggesting a reduction in effectiveness of Evusheld, a monoclonal antibody, against BA.5.

“So that’s another feature of immune escape, is that our monoclonal antibodies don’t work as well,” Topol said.

The question of whether BA.5 leads to more severe illness in humans has not been settled.

Data out of South Africa suggest that BA.5 hasn’t changed the risk of hospitalization compared with earlier versions of Omicron, Chin-Hong said.

Over the weeklong period ending Thursday, California reported an average of more than 15,500 new coronavirus cases per day. On a per capita basis, that’s about 278 cases a week for every 100,000 residents. That’s down about 12% compared with the previous week, but officials and experts say the apparent dip could partly be the result of data interruptions over the Fourth of July holiday weekend.

Los Angeles County’s coronavirus case rate has been relatively stable for the last week but remains high, at about 5,400 cases a day. On a per capita basis, that’s 373 coronavirus cases a week for every 100,000 residents.

The official tallies are almost assuredly a major undercount due to the widespread use of at-home tests — the results of which are not reliably reported.

Statewide, 4,024 coronavirus-positive patients were hospitalized as of Friday, the highest single-day total since late February. In Los Angeles County, the latest patient census was 1,014, a 33% increase from two weeks before.

Though a significant share of those patients are not hospitalized due to complications from COVID-19, and may have incidentally tested positive after seeking care for some other reason, officials say they nevertheless present a particular strain on resources because of the additional services needed to keep them from spreading the virus.

And so long as transmission remains elevated, healthcare systems are unlikely to see major relief.

“With more cases, we’re obviously seeing more people needing medical attention — and not just at our hospitals, but also at our emergency departments and urgent care centers that are filled with many folks needing care for their COVID-related illness,” L.A. County Public Health Director Barbara Ferrer said during a recent briefing.

COVID-19 deaths, while remaining relatively low, are beginning to tick upward in L.A. County as well, from about 50 a week in early June to nearly 100 deaths a week now. At the peak of the winter Omicron wave, L.A. County reported more than 500 deaths a week.

In previous surges, dominant strains like Delta last summer or Alpha previously stuck around for relatively long periods and weren’t displaced by their successors quickly, meaning someone who was infected could enjoy a high degree of protection for perhaps several months.

That timeline has shortened considerably in the Omicron area. Just since April, three different subvariants — BA.2, BA.2.12.1 and now BA.5 — have been estimated to be the dominant strain nationwide. This rapid succession means it’s possible for someone to get infected with an earlier edition of Omicron and then get re-infected with a later version several weeks later.

“A lot of people were recently infected can probably get the virus, again, in three or four weeks, versus the old days, where they have a three-month window period” when reinfection is less likely, Chin-Hong said.

Chin-Hong said he’s aware of people who, after their infection, thought it gave them a pass to “go out even more and not worry as much,” only to be stuck with a repeat infection. “That line of thinking is not great when you have the changing of the guard” of the Omicron subvariants, he added.

While some people remain asymptomatic or have mild symptoms, others report intense discomfort, including high fever, a raging sore throat and brain fog and fatigue that can last weeks — or possibly be the start of long COVID, in which symptoms of illness can persist for months or years.

It’s also likely that some who have thus far avoided getting infected are no longer employing certain protective measures they did before, or are exposed to family members and friends who have loosened up on protective practices.

Those measures remain largely voluntary at this point in many public settings, but recent increases in coronavirus-positive hospitalizations have pushed L.A. County closer to potentially issuing a new mask mandate that would apply to indoor public places. The county already requires masking on public transportation and at airports, healthcare facilities and nursing homes, as well as at work sites where there have been three or more coronavirus cases over a two-week period.

If current trends continue, L.A. County could move from the medium COVID-19 community level — which is defined by the U.S. Centers for Disease Control and Prevention and factors in case and hospitalization rates — into the high level as soon as Thursday.

If the county is in the high COVID-19 community level for the next three consecutive Thursdays, health officials are prepared to implement a new universal mask mandate in indoor public settings for those 2 and older starting July 29.