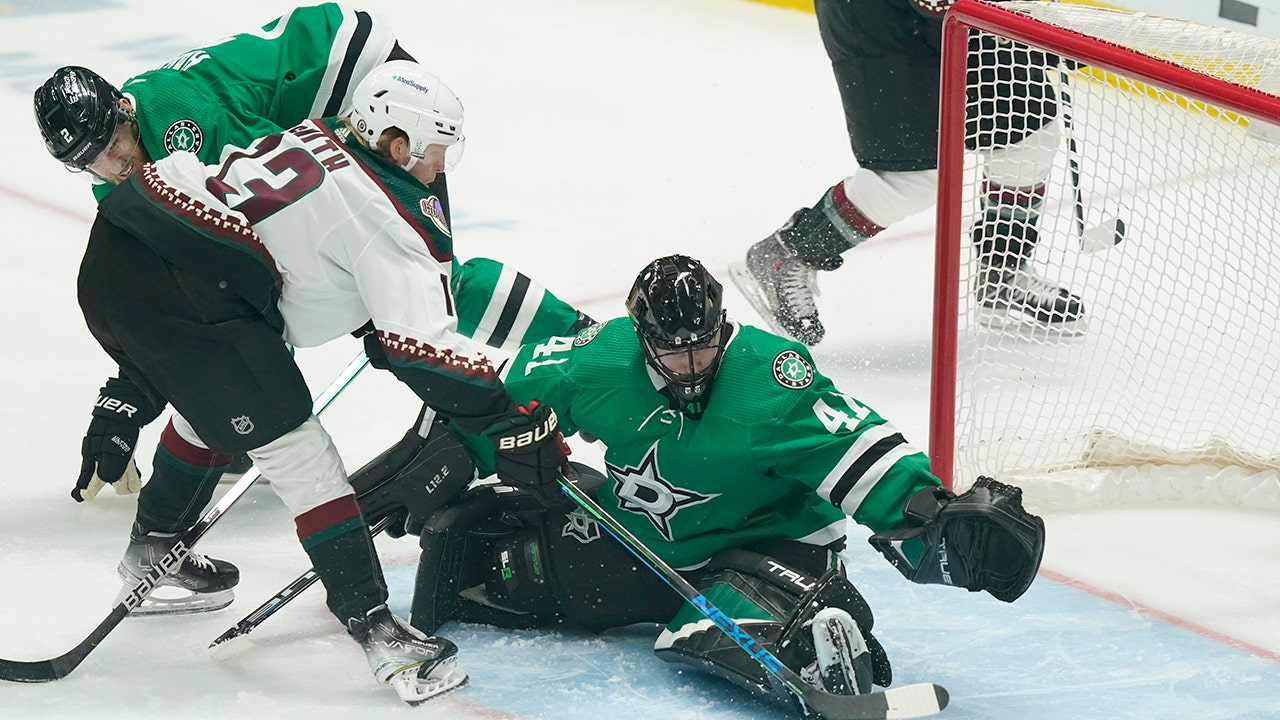 All that mattered to Dallas Stars coach Rick Bowness was getting the point they needed to wrap up a playoff spot. He wasn’t even concerned about how they ended up in overtime.

“We’re in,” Bowness said after the Stars lost 4-3 in overtime to Arizona, which overcame a 3-0 deficit in the third period Wednesday night.

Anton Stralman scored his eighth goal for Arizona with 16:37 left in regulation, about four minutes before Shayne Gostisbehere’s unassisted goal from the blue line near the boards after the Stars had won a faceoff. Barrett Hayton tied it at 3 with 8:02 left on a 5-on-3 power play.

“That’s just self-inflicted,” Bowness said. “You move on and we’ll get ready for the playoffs. … The game was in order pretty good for the most part. It’s easy to clean up those things.”

Jani Hakanpaa scored on the first shot of the game for Dallas, Joe Pavelski had two assists to reach a career high in points at age 37 for the Stars, who after a seven-round shootout victory at home over Vegas on Tuesday night needed only one point to join Nashville in the two wild-card spots.

The Stars got that point by getting to overtime before losing when Travis Boyd scored his 16th goal 1:43 into the extra period past Scott Wedgewood, who had 33 saves against his former team.

“We’ve got our opportunity now,” Pavelski said. “Disappointing third … but a lot of effort goes into the season to get a chance. And, you know, this is the first step.”

Dallas has 96 points, one more than the idle Predators, who have games remaining at Colorado and Arizona. The Stars, who close the regular season at home Friday night against Anaheim, will have to finish ahead of the Predators to take the top wild-card spot since Nashville holds the tiebreaker with more regulation wins if the team tie in the standings.

Hakanpaa, the defenseman with one goal his previous 39 games, scored on a sniper shot from just inside the blue line 4:42 into the game, and only seconds after a faceoff, that went off a Coyotes player on the way to the net. Pavelski had secondary assists on goals by Tyler Seguin and Miro Heiskanen, whose score came with a two-man advantage early in the second period.

The Stars missed the playoffs in the shortened 56-game season last year. They went to the Stanley Cup Final in the 2019-20 season that stretched into late September after a COVID-19 pause and finished in an NHL bubble in Canada.

A night after a regulation win would have clinched a playoff spot, Dallas started fast against last-place Arizona. The only win for the Coyotes in their 11 previous games had been 5-3 at playoff-bound Minnesota on Tuesday night.

“At some point we kind of lost our mojo and were not as tough to play against,” coach Andre Tourigny said. “You don’t wake up in the morning with the same feeling, pride, and happy about yourself. That was important for us to get back at it. And I think we finished really strong.”

Dallas led 2-0 late in the first when 40-goal scorer Jason Robertson’s shot ricocheted off the left post and slid across the crease behind Harri Sateri before Seguin knocked it in for his 24th goal.

Sateri stopped 26 shots, and Dallas had several others bang off the posts.

Heiskanen’s one-timer from the top of the circle came only 14 seconds into a 5-on-3 opportunity, and made it 3-0. Arizona outshot Dallas 14-7 in the first period, but the Stars had the first 11 shots in the second period.

‘We had 13 scoring chances in the second period and got one goal. I think that game should have been over in the second period,” Bowness said. “You give their goalie credit, he kept them in the game and gave them a chance to win. He his job. And Wedgie was not at fault for any of those goals. He did his job.”

The Stars are in the playoffs for the 17th time in the 28 seasons they have played since moving to Dallas from Minnesota. It’s the third time in four seasons after making the playoffs only twice in the 10 years before that. … Sateri started only his fourth game for Arizona since getting claimed off waivers from Toronto. He had allowed five, seven and five goals his first three.

Coyotes: Host Nashville on Friday night in their final home game at Gila River Arena in Glendale, where they have played home games since 2003. The Coyotes will play at Arizona State’s new multi-purpose arena for at least the next three seasons.

Stars: In their first two meetings against Anaheim, the Stars got a pair of 3-2 victories, one in overtime, over a three-night stretch on the road last month.