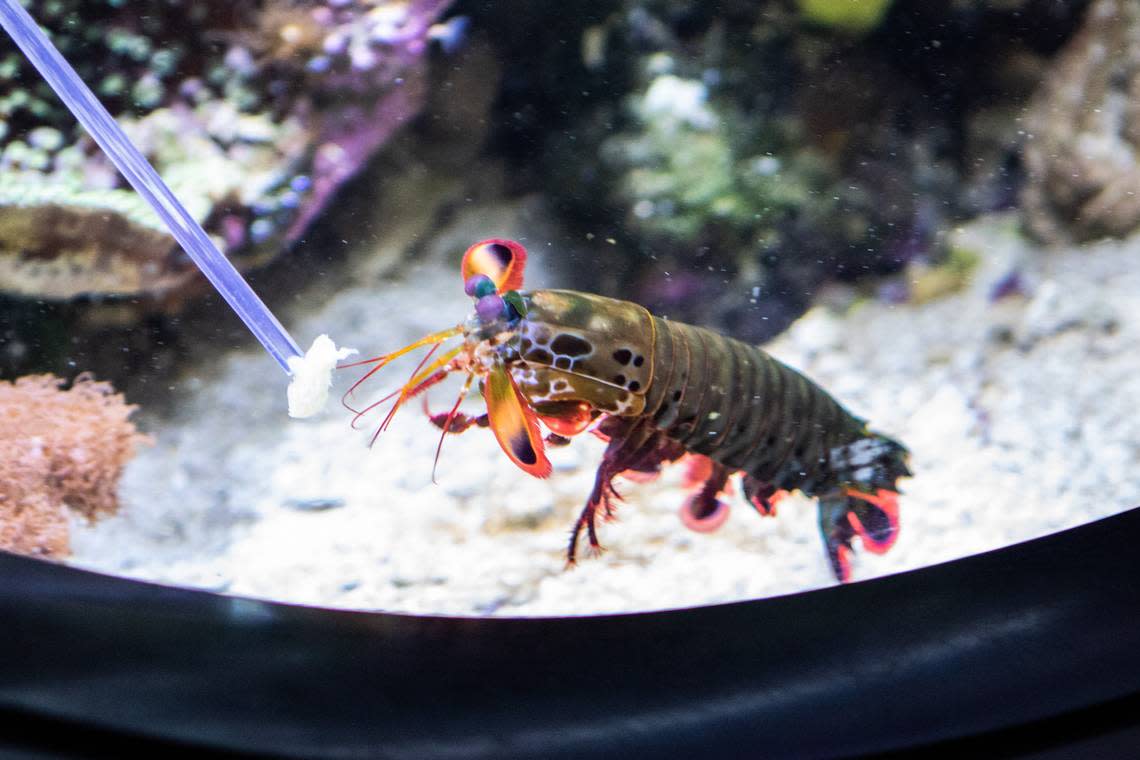 Among the shrimp species that surround South Carolina’s coast, mantis shrimp stand out as most notable of them all.

Not even technically a shrimp, mantis shrimp, or stomatopods, are distant relatives of crabs, lobsters and shrimp. They get their name because this carnivorous marine crustacean resembles a mix between a praying mantis and a shrimp. Occasionally, they can even be described as appearing similar to a lobster.

Often seen in local waters along the state’s coast and along the Southeastern U.S., the mantis shrimp can be found in shallow tropical or subtropical waters.

“The mantis shrimp (not a true shrimp) is a flattened, inshore crustacean sometimes incorrectly called ‘rock shrimp,’” says SCDNR about the species.

“Mantis shrimp can be eaten, but have little meat of poor quality,” SCDNR continues.

With over 450 species of mantis shrimp worldwide, they are a common sight seen in a variety of different colors and can grow anywhere from 12 to 15 inches in length.

They can be found along coastal shores, usually living in an abandoned burrow, sometimes U-shaped and move in and out to capture nearby prey when spotted. The fast and vicious stomatopods can also live in coral reefs or rock crevices. Depending on the specific mantis shrimp species, these marine critters can be active during the day or live nocturnally.

Mantis shrimp spend a majority of their lives living in burrows, reefs or crevices and generally only leave to mate or hunt for nearby food sources. Mantis shrimp act as an ecological importance to their coral reefs. This is because they are incredibly sensitive to surrounding environmental pollutants and their behavior can indicate when conditions may be poor.

“They have a unique set of “thumb splitters” or small appendages that they use to break or crack open shells of other crustaceans to retrieve food and nutrients. They are the fastest known organism due to their quick jabbing appendages that can reach up to 170 mph,” according to Lamar University.

These appendages can be used in two separate ways, generally seen through hunting and attacking in the species.

Fishermen and marine specialists alike have stated that the mantis shrimp’s claw is dangerous, and caution is necessary to avoid getting hurt.

“The title of fastest punch in the animal kingdom firmly belongs to the peacock mantis shrimp, whose club-like appendages reach the speed of a .22-caliber slug, shatter clamshells with ease and can slice human fingers to the bone,” wrote The Washington Post.

Mantis shrimp can act aggressively, and their jabs and blows have been described as “devastating” to their prey or to many that choose to spar with one.