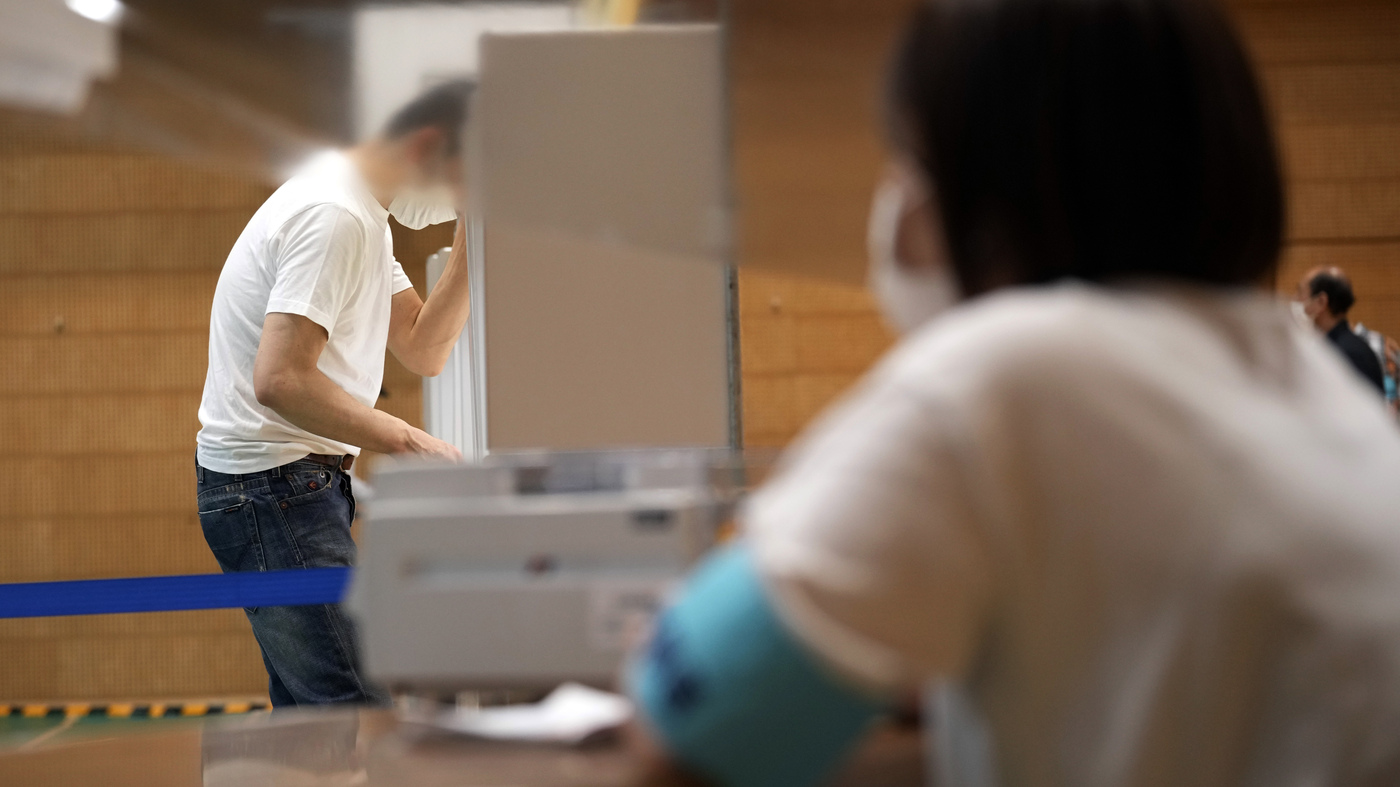 Fumio Kishida, second left, Japan’s prime minister and president of the Liberal Democratic Party (LDP), speaks after placing a red paper rose on an LDP candidate’s name to indicate a victory in the upper house election.

Fumio Kishida, second left, Japan’s prime minister and president of the Liberal Democratic Party (LDP), speaks after placing a red paper rose on an LDP candidate’s name to indicate a victory in the upper house election.

TOKYO — Japan’s governing party and its coalition partner scored a major victory in a parliamentary election Sunday imbued with meaning after the assassination of former Prime Minister Shinzo Abe amid uncertainty about how his loss may affect party unity.

The Liberal Democratic Party and its junior coalition partner Komeito raised their combined share in the 248-seat chamber to 146 — far beyond the majority — in the elections for half of the seats in the less powerful upper house.

With the boost, Prime Minister Fumio Kishida stands to rule without interruption until a scheduled election in 2025.

That would allow Kishida to work on long-term policies such as national security, his signature but still vague “new capitalism” economic policy, and his party’s long-cherished goal to amend the U.S.-drafted postwar pacifist constitution.

Kishida welcomed the major win but wasn’t smiling, given the loss of Abe and the hard task of unifying his party without him. In media interviews late Sunday, Kishida repeated: “Party unity is more important than anything else.”

He said responses to COVID-19, Russia’s invasion of Ukraine and rising prices will be his priorities. He said he will also steadily push for reinforcing Japan’s national security as well a constitutional amendment.

Kishida and senior party lawmakers observed a moment of silence for Abe at the party election headquarters before placing on the whiteboard victory ribbons next to the names of candidates who secured their seats.

Abe, 67, was shot while giving a campaign speech in the western city of Nara on Friday and died of massive blood loss. He was Japan’s longest-serving political leader over two terms in office, and though he stepped down in 2020 was deeply influential in the LDP while heading its largest faction, Seiwakai.

“This could be a turning point” for the LDP over its divisive policies on gender equality, same-sex marriages and other issues that Abe-backed ultra-conservatives with paternalistic family values had resisted, said Mitsuru Fukuda, a crisis management professor at Nihon University.

Japan’s current diplomatic and security stance is unlikely to be swayed because fundamental changes had already been made by Abe. His ultra-nationalist views and pragmatic policies made him a divisive figure to many, including in the Koreas and China.

Following the assassination, Sunday’s vote took on new meaning, with all of Japan’s political leaders emphasizing the importance of free speech and defending democracy against acts of violence.

Abe’s killing may have resulted in sympathy votes. Turnout on Sunday was around 52%, up about 3 points from the previous 48.8% in 2019.

“It was extremely meaningful that we carried out the election,” Kishida said Sunday. “Our endeavor to protect democracy continues.”

On the final day of campaigning Saturday, party leaders avoided fist-bumps and other friendly gestures in close contact with the public — a sign of tightened security following Abe’s assassination during a campaign rally.

Abe’s body has been returned to his home in Tokyo’s upscale Shibuya, where many mourners, including Kishida and top party officials, paid tribute. His wake and funeral are expected in coming days.

On Sunday, the suspect accused of his murder was transferred to a local prosecutors’ office for further investigation, and a top regional police official acknowledged possible security lapses allowed the gunman to get close to Abe and fire his homemade gun at him.

The suspect, Tetsuya Yamagami, told investigators he acted because of Abe’s rumored connection to an organization that he resented, police said, but had no problem with the former leader’s political views. The man hated a religious group that his mother was obsessed about and that bankrupted a family business, according to media reports, including some that identified the group as the Unification Church.

Nara prefectural police chief Tomoaki Onizuka said Saturday that problems with security were undeniable, that he took the shooting seriously and will review the security procedures.

Abe stepped down two years ago blaming a recurrence of the ulcerative colitis he’d had since he was a teenager. He said he regretted leaving many of his goals unfinished, including revising Japan’s war-renouncing constitution. While some conservatives consider the post-World War II charter a humiliation, the public is more supportive of the document.

Abe was groomed to follow in the footsteps of his grandfather, former Prime Minister Nobusuke Kishi. His political rhetoric often focused on making Japan a “normal” and “beautiful” nation with a stronger military through security alliance with the United States and bigger role in international affairs.

He became Japan’s youngest prime minister in 2006, at age 52. But his overly nationalistic first stint abruptly ended a year later, also because of his health, prompting six years of annual leadership change.

He returned to office in 2012, vowing to revitalize the nation and get its economy out of its deflationary doldrums with his “Abenomics” formula, which combines fiscal stimulus, monetary easing and structural reforms. He won six national elections and built a rock-solid grip on power.

Japan is known for its strict gun laws. With a population of 125 million, it had only 21 gun-related criminal cases in 2020, according to the latest government crime paper. Experts say, however, some recent attacks involved use of consumer items such as gasoline, suggesting increased risks for ordinary people to be embroiled in mass attacks.