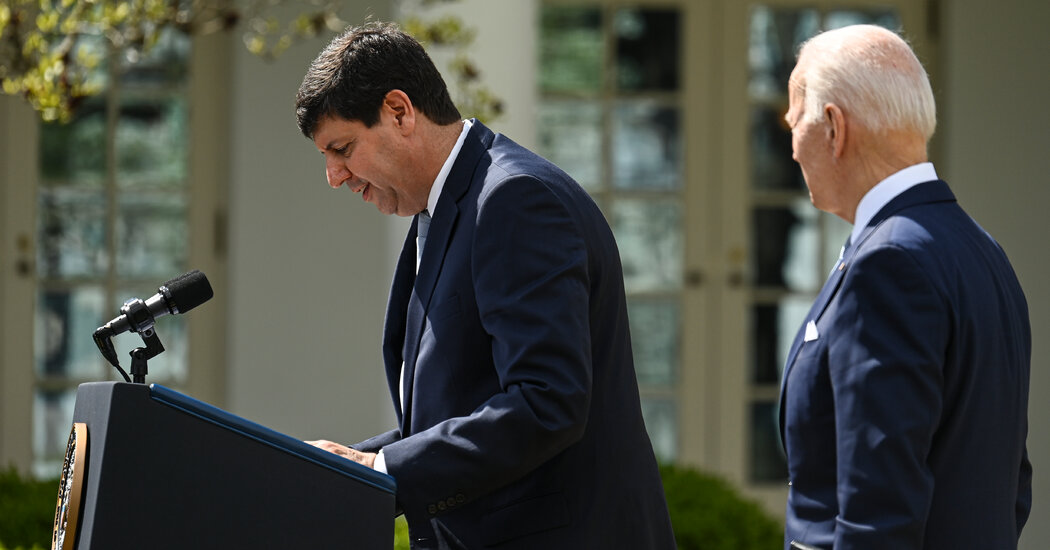 WASHINGTON — The Senate on Tuesday narrowly confirmed Steven M. Dettelbach to run the Bureau of Alcohol, Tobacco, Firearms and Explosives, giving the agency responsible for marshaling the federal response to gun violence its first permanent leader in seven years.

Mr. Dettelbach, a former federal prosecutor from Ohio, was confirmed by a 48-to-46 vote. He was backed by every Democrat who voted as well as two Republicans, Susan Collins of Maine and Rob Portman of Ohio.

The confirmation of Mr. Dettelbach, 57, who was President Biden’s second choice for the job, represented a victory for the White House, which has tried to patch together a response to a surge in gun-related crime and mass shootings without the use of universal background checks and an assault weapons ban, its preferred policy tools.

West Wing officials regarded Mr. Dettelbach’s confirmation to be as important, at least in the short term, as the modest bipartisan gun control measure passed by Congress and signed into law by the president last month.

Mr. Dettelbach was expected to be sworn in soon after the vote so he could begin to tackle the daunting task of energizing a bureau grappling with an overwhelming workload, implacable opposition from the U.S. gun lobby, technological constraints, sagging morale and chronic funding shortfalls that have left field offices short on staff needed to investigate crimes and inspect gun dealers.

“He’s facing a very tall task,” said Senator Angus King, a political independent from Maine who caucuses with Democrats and last year sunk the nomination of Mr. Biden’s first choice to run the agency, David Chipman, over concerns about his fiery temperament.

“Dettelbach’s first job, and he’s accomplished it just by being confirmed, is to improve morale at A.T.F. after nearly eight years without someone at the helm,” Mr. King added after casting his vote for Mr. Dettelbach. “The second job is finding the right people, at the top, to execute what he wants to accomplish. It’s a rebuilding exercise.”

John Feinblatt, the president of Everytown for Gun Safety, a group funded by former Mayor Michael R. Bloomberg of New York, called the Senate vote “a watershed victory for the gun safety movement and further proof that the Senate logjam around this life-or-death issue is finally breaking.”

Opposition to Mr. Dettelbach’s confirmation, initially fierce, slackened after the recent mass shootings in Buffalo; Uvalde, Texas; and Highland Park, Ill., prompted calls for action in Washington. Democratic leaders were forced to resort to a procedural move to overcome a deadlock in the Judiciary Committee last month, but while most Republicans opposed the pick, they did so without much vehemence.

“There were questions about his record, but I agree that the A.T.F. definitely needs a permanent leader,” Senator Roy Blunt, Republican of Missouri, said after voting against the nomination on Tuesday.

Mr. Dettelbach, a graduate of Harvard Law School, worked in a series of prosecutorial posts in Maryland, Washington, D.C. and Ohio before becoming the U.S. attorney for the Northern District of Ohio, which includes Cleveland. He held that post under President Barack Obama and served from 2009 to 2016.

Since the spring, he has quietly worked the phones to assure the agency’s rank and file that he appreciated their hard work during his under-the-radar nomination process, which has earned him the quiet backing of career officials who had been hostile to Mr. Chipman.

Mr. Dettelbach ran unsuccessfully for Ohio attorney general in 2018 as a Democrat, but he took great pains to portray himself publicly as a career prosecutor who believes that politics play “no role in law enforcement,” as he put it at his confirmation hearing. That stance was intended to draw a contrast with Mr. Chipman, whose blistering criticism of Republicans and gun rights organizations had provoked a backlash that ultimately forced the administration to pull his nomination.

The bureau that Mr. Dettelbach inherits has long been hamstrung by a series of laws, passed at the behest of the National Rifle Association and other groups that favor gun rights, that have limited the agency’s ability to conduct electronic gun traces or share basic firearms data with the public.

But the agency plays an outsize role in putting in place nearly all the gun control steps taken by Mr. Biden through executive authority — including a crackdown on the sale of homemade “ghost guns” and the administration’s promise to more closely scrutinize federally licensed gun dealers, which are often the source of guns used in crimes.

In addition, the agency is also expected to be a central player in establishing the new gun law, particularly provisions embedded in the bill that make it easier for prosecutors to bring federal weapons trafficking charges.

“It’s extremely timely and important for him to be getting into the job right now,” said Senator Kirsten Gillibrand, Democrat of New York, who worked on the trafficking provisions. “I want them to bring trafficking cases every day.”

Mr. Dettelbach’s path to his new job was elliptical. Justice Department officials, stung by Mr. Chipman’s downfall, were skeptical about announcing a new nominee to be the permanent director of the agency. Instead, they favored continuing the tenure of the bureau’s interim director, Marvin Richardson, a career agency official.

But after The New York Times reported that Mr. Richardson had attended a gun industry-sponsored event in Las Vegas, White House officials, under pressure from gun control groups, began a search for less polarizing potential candidates.

They settled on Mr. Dettelbach, who was well liked inside the Justice Department and was looking for a new job after trying without success to be reappointed to his old position as U.S. attorney in northern Ohio.

Some gun control activists initially questioned whether Mr. Dettelbach, known for his agreeable, low-key personality, would be tough enough to overhaul the bureau. But on Tuesday, their response was celebratory, if a bit tempered by the challenges he faces.

“This is a historic day,” said Josh Scharff, senior counsel with the legal arm of Brady, a gun safety group that pressed the White House to pick a permanent director.

Mr. Scharff said he hoped that Mr. Dettelbach would quickly put in place changes necessary to reduce gun trafficking and improve the agency’s oversight of the gun industry.

“He’ll be an excellent leader of A.T.F. and will quickly and effectively modernize A.T.F. to catalyze the agency’s public safety mission,” he added.