Sanders pressures Biden on Amazon unions: ‘The time for talk is over’ 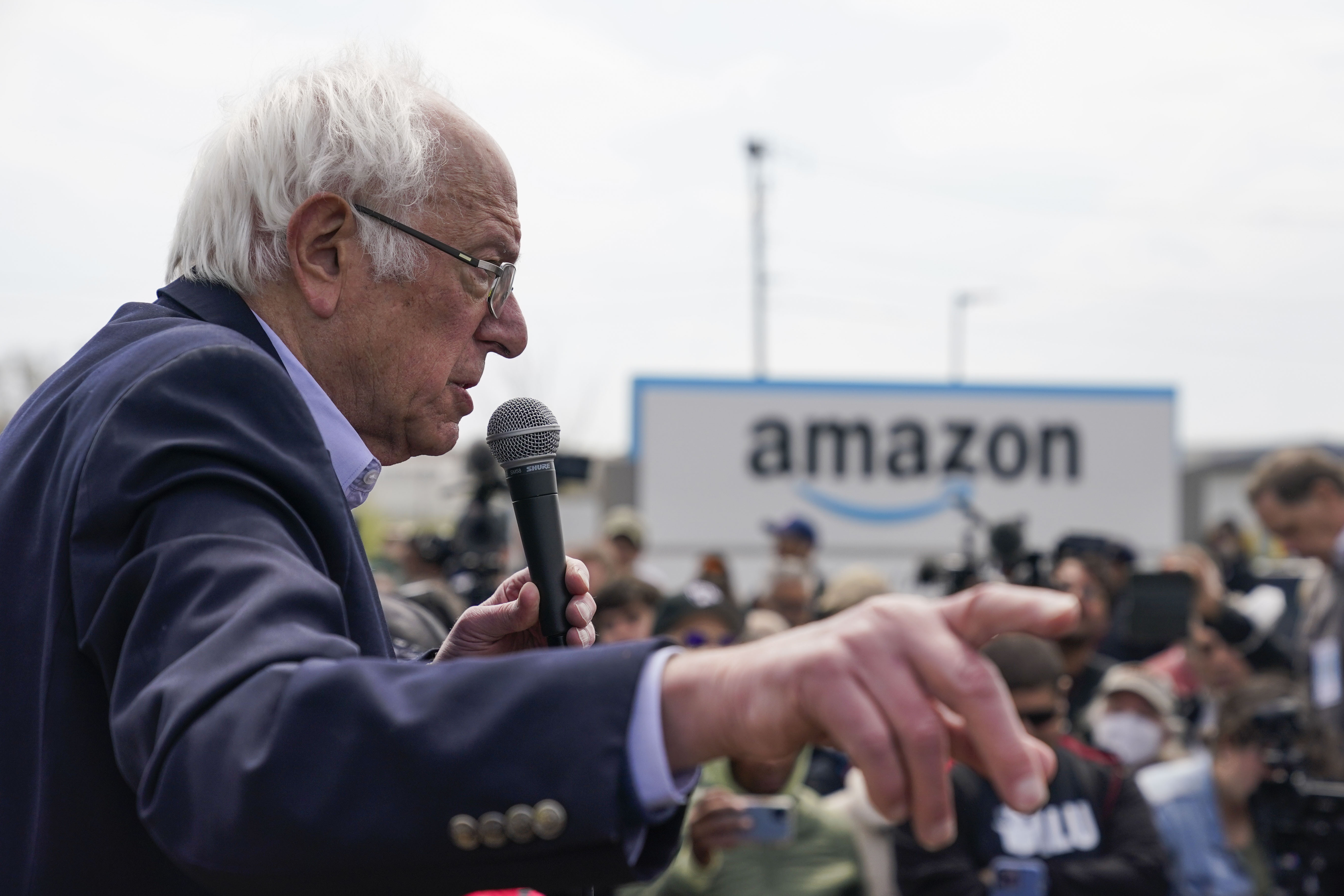 And asked if Biden has fallen short in his union support thus far as president, Sanders said bluntly in an interview: “Yes, he has.”

“President Biden has talked more about his support for unions than any president I can remember. That’s good. But the time for talk is over. Workers need action. Now,” Sanders said. “What Biden talked about during the campaign … is that if large corporations engage in illegal anti-union activity, they will not be eligible for federal contracts. Well, Amazon is engaged in illegal anti-union activity.”

Biden’s stated goal of becoming the “most pro-union president” has had mixed success.

The Senate has not passed the Protecting the Right to Organize Act that would enable more workers to form a union. But the union allies who helped win Biden the office say they have no buyers’ remorse, pointing to oft-unilateral actions such as appointing union-friendly nominees to the National Labor Relations Board, pushing for policies that would ensure federally funded projects go to contractors with unionized workforces and creating a task force to promote unionization in the public and private sectors.

Sanders often uses his senatorial perch to push Democratic presidents to the left. And with six months before the midterms, he believes that Biden has a big opportunity to deliver at a time of mounting unionization efforts nationwide.

“All I am asking the president to do is what he explicitly stated that he would do during the campaign. It’s the right thing to do. And this is a time when working people need to know that the president is on their side,” Sanders said in the interview.

A White House official said that the president “has stated consistently and firmly that every worker in every state must have a free and fair choice to join a union and the right to bargain collectively with their employer.” The official, who declined to be named, added that Biden believes “there should be no intimidation, no coercion, no threats, and no anti-union propaganda from employers while workers are making that vitally important choice about a union.”

Union allies are hailing Sanders moves this week as welcome moves to push Biden further. AFL-CIO President Liz Shuler said that “Biden has been, from the bully pulpit, supportive of Amazon workers.” But, she added, “could there be more? Always.”

“I’m glad the senator has weighed in, because we need voices from all corners coming down hard on Amazon’s union busting tactics,” Shuler said. “As we’re picking up momentum, it will be even more important to have that voice.”

Biden has not explicitly endorsed the fight to unionize Amazon — though he has been more vocal on the issue than his predecessors. The president released a video earlier this year at the onset of the first Amazon union election in Bessemer, Ala., implying his support for the push.

More recently, he told the North America’s Building Trades Union annual conference in D.C. this month that “the choice to join a union belongs to workers alone” before leaning into the mic and saying: “By the way, Amazon, here we come. Watch.”

“We need any kind of help from the federal level; that would actually make it much easier for us,” Alabama warehouse worker Isiah Thomas said Tuesday. “Because we’re trying our hardest, especially in Alabama.”

Fresh off visits to an Amazon warehouse in Staten Island, N.Y., and with Starbucks workers in Virginia, Sanders said that Amazon is essentially using its resources to elongate negotiations with warehouses that vote to unionize in order to prevent a contract from ever being ratified. Summing up their strategy, he said “they have unlimited resources, they’ll drag it out.”

At the Budget panel hearing next week, “we are going to determine how much federal money has gone to companies — not just Amazon, but primarily Amazon, who are engaging in illegal anti-union activities,” Sanders said.

Sanders pointed to the e-commerce giant’s recent anti-union behavior in Staten Island in particular. Workers at one of its facilities in that New York City borough voted last month to form Amazon’s first union.

There, Amazon spent millions in an attempt to discourage employees from organizing — a strategy that has paid off in Alabama, where an earlier unionization attempt proved unsuccessful. (The union representing those workers, the Retail, Wholesale and Department Store Union, is in the process of challenging the results of a redo election amid allegations that Amazon again unlawfully intervened.)

“They bring people in, they work them as hard as they possibly can. And then a year later, these people are forced to leave and they bring in new people,” Sanders said. “That is the business model for Amazon, and workers are beginning to stand up.”

There are more than 50 unfair labor practice cases against Amazon pending before the NLRB, Sanders said. The NLRB did not immediately comment.

Sanders’ letter also raises concerns over Amazon’s classification of its drivers as independent contractors, rather than employees, which provides them with a narrower set of benefits while preventing them from forming a union. And he called out Amazon’s workplace safety policies, which he said are “inadequate.”

Employees at Amazon facilities sustained injuries at more than twice the rate of workers at other facilities in 2021, according to a Strategic Organizing Center analysis of Occupational Safety and Health Administration data. That year, Amazon employed one-third of all warehouse workers in the U.S. — but accounted for nearly half of all injuries in the sector.