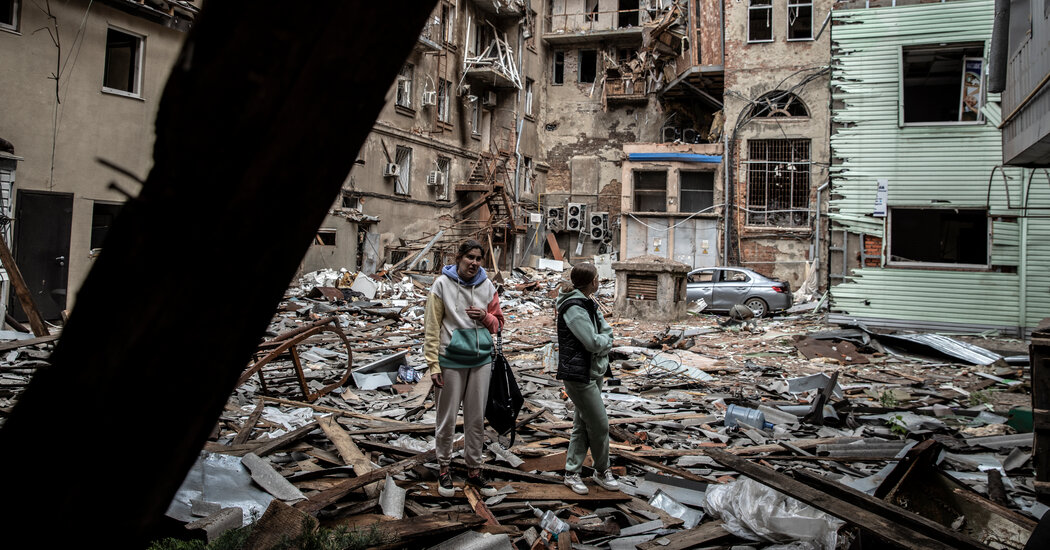 Since late February, when Russia began pummeling Ukraine with missiles and artillery on a scale unseen in Europe for decades, civilian deaths have been as inevitable as the Russian excuses that follow.

Attacks have struck people in bread lines and on playgrounds, as well as apartment blocks, theaters and hospitals. After each one, Russia has denied or deflected responsibility, often accusing Ukraine of attacking its own people to sway domestic and global opinion against Moscow.

Russia has claimed that it aims only at targets of military value — even though some were hundreds of miles from the front lines — and that whenever a civilian facility did get hit, it was one that the Ukrainian military had co-opted for use as a command post, a shelter for foreign fighters or storage for weapons.

Yet journalists, independent organizations and Ukrainian officials have documented Russian attacks on thousands of civilian buildings, structures and vehicles. In some cases, Russia used outdated weapons that might have been aimed at an industrial facility but missed, putting civilians at risk. But in many other cases, the Russians’ explanations have not held up under scrutiny.

Here are a few of the largest attacks, along with how Russia has explained away responsibility.

At least 30 people were killed after Russian rockets slammed into an apartment complex in Chasiv Yar, an eastern village about a dozen miles from the front line, Ukrainian emergency services said. Initial reports said a number of others were trapped beneath the rubble.

Overnight missiles struck a hotel; an entire section of a nine-story residential tower, where more than 100 people lived; and a recreational center, killing at least 21 and injuring dozens of others about 50 miles southwest of Odesa, according to Ukraine’s state emergency service.

Russia’s response: Russia was targeting ammunition and arms depots, plants that manufacture and repair military equipment, and places where “foreign mercenaries” and “nationalist elements” were based and trained, said Dmitri S. Peskov, the Kremlin’s spokesman. “I would like to again remind you of the words of the president of the Russian Federation and commander in chief that the armed forces of the Russian Federation are not working against civilian targets in the course of the special military operation,” he said, referring to President Vladimir V. Putin.

A daytime attack on a busy shopping mall killed at least 20 and injured dozens in Kremenchuk, in central Ukraine. Ukrainian officials estimated that hundreds of people could have been inside the mall.

Russia’s response: Russia’s Defense Ministry said it had struck Kremenchuk with what it described as “high-precision missiles.” Its target, the ministry said, had been an industrial facility next to the mall that was serving as a weapons depot and that contained munitions for systems supplied by the United States and European countries. The ministry said that the strike had subsequently caused the stored munitions to explode, and that that had started a fire at the mall.

Separately, Dmitry Polyanskiy, a deputy Russian ambassador to the United Nations, suggested on Twitter that the explosion had been caused by Ukraine as a “provocation.”

A rocket attack on a crowded train station that was packed with civilians trying to escape to safer areas killed at least 50 people and wounded many more. The remains of the rocket, which President Volodymyr Zelensky of Ukraine identified as a Tochka-U short-range ballistic missile, had the words “for our children” written on it in Russian. It was unclear who had written the message.

Russia’s response: Russia denied any responsibility, saying that it did not have Tochka-U missiles in its arsenal, but that the Ukrainian forces had used such missiles. It later accused Ukraine of conducting the attack.

At least a dozen people — estimates of the toll vary up to several hundred — died in Mariupol in an attack on a theater that people had been using as a bomb shelter, local officials said. The word “children” was written in Russian in large white letters on the ground in front of and behind the building.

Russia’s response: Maria Zakharova, a spokeswoman for Russia’s Foreign Ministry, said that Ukraine was trying to frame Russia, and that it was “a lie” to say that Russia had bombed the theater, according to Reuters. “It is well known to everyone that the Russian armed forces do not bomb cities,” she said. “No matter how many videos are doctored by NATO structures and how many video clips and photo fakes are pumped out, the truth will come out.”

Russia’s Defense Ministry denied carrying out the attack and accused the Azov regiment of the Ukrainian National Guard of blowing up the theater in “a bloody provocation.”

At least 18 people were killed and 26 were injured when a munition struck a bread line outside a supermarket in Chernihiv, according to Human Rights Watch.

Russia’s response: Russia’s Defense Ministry denied responsibility, saying that its forces were not present in Chernihiv at the time of the attack. The ministry said that either “Ukrainian nationalists” had carried it out or that it had been staged by the Security Service of Ukraine.

A missile strike in Mariupol hit a maternity hospital, which had already been operating in dire conditions. A photograph of a pregnant woman being carried through rubble became one of the war’s enduring images; the woman died days later.

Russia’s response: Officials said the hospital had been commandeered as a base by Ukrainian forces. Mr. Polyanskiy, Moscow’s deputy ambassador to the United Nations, dismissed the accusations as “fake news.”

The bodies of dozens of people, many of whom had apparently been executed, were found scattered across Bucha, a suburb of Kyiv, after Russian forces withdrew from the Ukrainian capital at the end of March. A New York Times investigation found that Russian forces in Bucha had rounded up and executed a group of Ukrainian men on March 4, directly implicating those forces in a likely war crime. The Times also found video evidence that Russian forces had fatally shot a civilian cyclist on March 5.

Russia’s response: Russian leaders at the highest levels repeatedly denied wrongdoing in Bucha, and they described the images of dead civilians as a “provocation and fake.”

March to May, and again in June: Kharkiv shelling

A kindergarten classroom, a pub and a playground are among the many scenes of devastation in Kharkiv, where a relentless shelling campaign continued for months. Hundreds of people were killed, and hundreds of buildings destroyed, after the Russians used artillery, rockets, cluster munitions and guided missiles in residential areas. Although the shelling briefly halted, it resumed in June.