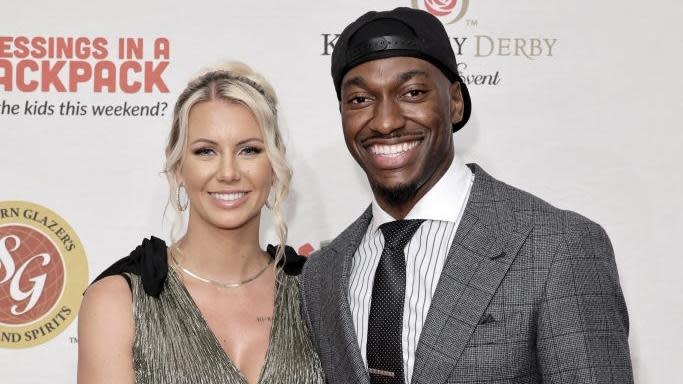 Grete Griffin, the wife to former NFL quarterback-turned-ESPN analyst Robert Griffin III, has had enough of the thirsty women in RGIII’s DMs.

Griffin made a cute message on her Instagram account, letting the women know she saw them vying for her husband’s attention.

“I guess the jokes on you,” Griffin writes in the post’s caption.

In the clip, she lipsynchs to Lady Gaga’s hit single “Paparazzi.” And mouths the lyrics, “I’m your biggest fan, I’ll follow you until you love me. Papa-paparazzi.”

Griffin also dedicates the clip to the “thirsty women in my husband’s DMs not knowing I run his social media.”

It’s not every day that a husband so willingly lets his wife run his social media, but there are clearly no secrets in the Griffin household.

Looking at the couple’s social media accounts, you can tell they love each other and will not apologize for it. RGIII let that be known when he got into a Twitter war over his wife’s cheeks or lack thereof.

Blavity got ‘behind’ the story when RGIII posted a video of himself lifting weights with the caption, “How I look at my wife in that sundress.”

Twitter user @naimamontana snapped Griffin back to reality with a tweet captioned, “This isn’t the flex u think it is…  but carry on… love whoever u want. Black men always tryna justify their choices. Just do u bruh, we dont gaf.”

Griffin attempted to end the feud with a tweet stating, “Moral of the story – Don’t argue with Twitter.”

Twitter didn’t stop clowning, but RGlll didn’t back down from defending his wife, and we can appreciate that.

But now, after wifey admits to running RGlll’s social media accounts, it makes us wonder if it was her defending her cakes all along.

Tell us what you think!