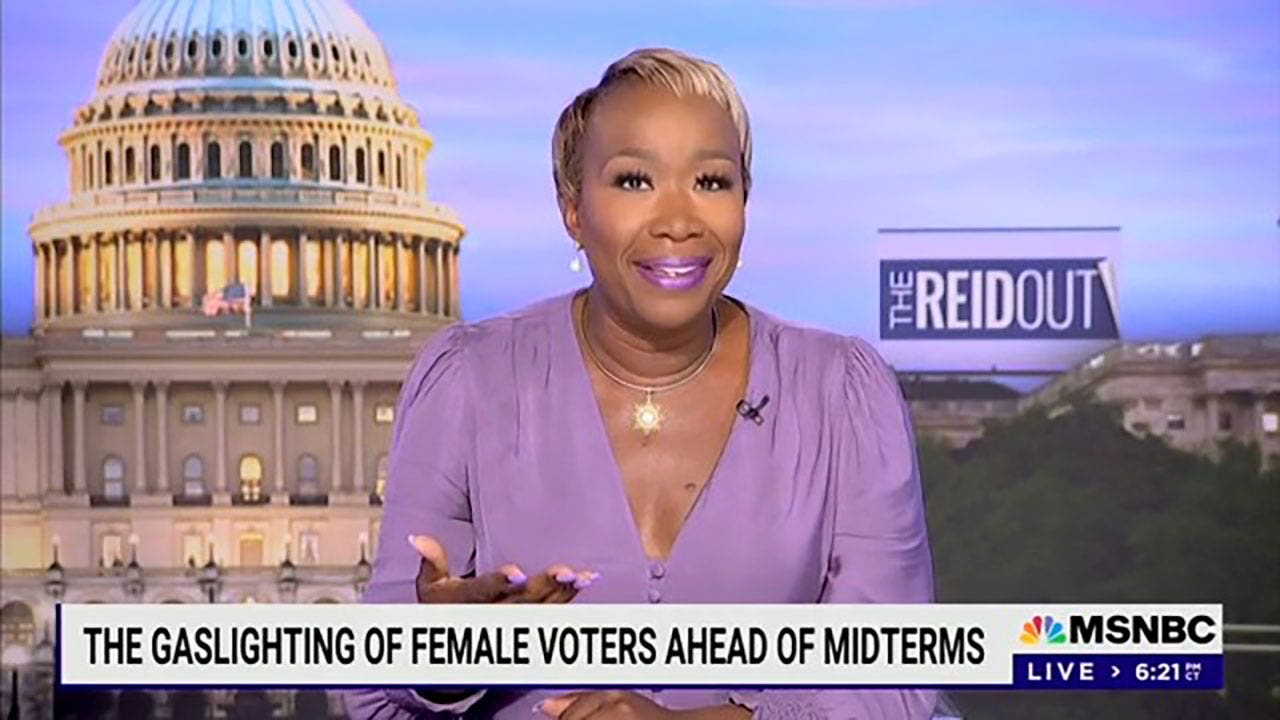 MSNBC’s Joy Reid accused Republicans on Thursday of gaslighting female voters by pushing inflation and the economy over abortion for the midterm elections.

The “Reid Out” host previewed a segment where she referred to Republican candidates focusing on inflation and the economy as an “effort to gaslight” female voters.

“The Republican effort to gaslight women voters. You don’t really care about abortion. All you care about is inflation. Got to feed your hubby and kids we’re going to make you have, right, gals? But guess what, reproductive rights are an economic issue,” Reid said.

She said the “beltway media” like CNN and Reuters are also guilty of pushing this “narrative.”

“Midterm election is now less than three weeks away, and in the final stretch, I have noticed, and I don’t know if you have noticed, frankly, this gaslighting of women voters. This message that says, you don’t really care about your right to control your own body, dears, it’s the economy, stupid. Republicans certainly want you to think about that and the beltway media is helping push that narrative with headlines touting recent polls, some with tiny sample sizes, suggesting Republicans are surging. The red wave is back. We can go back to the pre-Dobbs narrative because the economy is the most important issue,” Reid said.

She continued to make this assertion while speaking with her guest North Carolina Democratic Senate candidate Cheri Beasley.

“I do feel gaslit at this point that you have a media narrative that says that women don’t really care about abortion. Women don’t really mind if the states control their bodies. They just care about the price of milk. Is that what you’re experiencing when you’re talking to women across North Carolina?” Reid said.

“No, women care about freedom,” Beasley responded. “And they are deeply angry and fearful about what they see on this national narrative.”

STACEY ABRAMS SUGGESTS HAVING AN ABORTION AS SOLUTION TO INFLATION: ‘ECONOMIC REALITIES OF HAVING A CHILD’

A NYT/Siena College poll released earlier this week showed independent women voters have largely sided with Republicans in a massive swing compared to September. The Times wrote that this proved the economy is “a far more potent political issue in 2022 than abortion,” even among Democratic voters.

Democratic Georgia gubernatorial candidate Stacey Abrams also countered the claim that women were more concerned over inflation rather than abortion. She said abortion could actually be used to solve inflation problems.

“But let’s be clear. Having children is why you’re worried about your price for gas, it’s why you’re concerned about how much food costs. For women, this is not a reductive issue. You can’t divorce being forced to carry an unwanted pregnancy from the economic realities of having a child. And so these are — it’s important for us to have ‘both and’ conversations. We don’t have the luxury of reducing it or separating them out,” Abrams said.