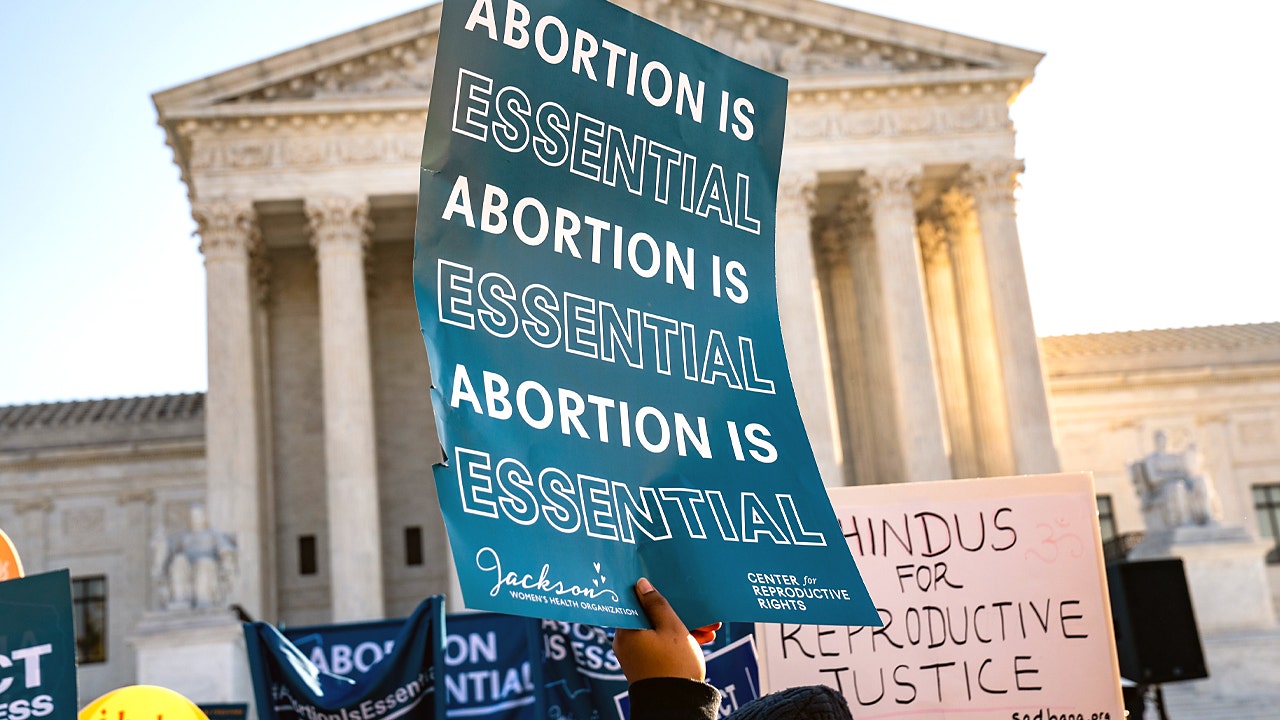 Politics writer Alexander Burns wrote, “[A] Supreme Court decision that abolished the right to an abortion is now threatening to reshape the lines of economic competition between conservative and liberal states.”

He highlighted Democratic governors pushing forward the message that protecting abortion rights was essential to making their states appealing to workers, particularly younger workers who are more concerned about social issues.

But for companies in red states, the fallout from “the rollback of women’s rights” could prove to be “dangerous” to their economies.

WASHINGTON, DC – DECEMBER 01: Abortion rights advocates and anti-abortion protesters demonstrate in front of the Supreme Court of the United States Supreme Court of the United States on Wednesday, Dec. 1, 2021 in Washington, DC. The Justices will weigh whether to uphold a Mississippi law that bans abortion after 15 weeks and overrule the 1973 Roe v. Wade decision.
(Kent Nishimura / Los Angeles Times via Getty Images)

“In states like Texas and Georgia, Republican lawmakers are effectively wagering that the local business environment will remain appealing enough to overcome concerns about women’s rights. And to some conservative politicians, the risk of alienating business investment is a price worth paying to eradicate abortion. The fallout of the Supreme Court’s ruling could be more dangerous for states that share Texas’ economic and social policies but lack its longstanding status as an economic powerhouse — states like Arkansas and Oklahoma, which have passed some of the most restrictive abortion bans in the country,” he wrote.

The Times also cited several Democrats, such as U.S. Secretary of Commerce and former governor of Rhode Island Gina Raimondo, predicting that it was a foregone conclusion that states with abortion bans would suffer economically.

Democratic governors have been trying to use the recent Court ruling to their political advantage. For instance, California Gov. Gavin Newsom recently released an attack ad in Florida encouraging residents to move to his state, saying their freedom was “under attack.”

Republicans and nonpartisan business groups told the Times reporter however, that they expected states like Texas to keep thriving despite abortion bans because of their pro-business policies such as lower taxes and less regulation. Still, the Times expressed skepticism.

“There is no recent precedent, however, for a rightward lurch in state-level policy on the scale of the crackdown on abortion that is now underway across much of the United States. The full impact of new restrictions is still uncertain in many states, and some bans are riddled with questions about how they will be enforced. A few, like Oklahoma’s total ban on abortion, appear to be so sweeping that they could imperil other kinds of reproductive care, including certain fertility treatments,” Burns cautioned.

FILE – In this Jan. 18, 2019, file photo, anti-abortion activists protest outside of the U.S. Supreme Court, during the March for Life in Washington. A committee in Texas considered a bill this week that would have opened the door to put women to death for their abortions.
(AP Photo/Jose Luis Magana, File)

BIDEN SLAMMED FOR TWEET BLAMING REPUBLICANS FOR ECONOMIC PROBLEMS: ‘I THOUGHT IT WAS RUSSIA’S FAULT’

The economy is a top issue for voters but not related to abortion. An Associated Press-NORC poll released last Friday confirmed voters feel inflation remains the number one concern facing the country, followed by high gas prices.

Even after the Supreme Court’s Dobbs decision, abortion lags far behind general economic concerns, gun issues, immigration and education, according to the poll.

Kristine Parks is an associate editor for Fox News Digital. Story tips can be sent to kristine.parks@fox.com.