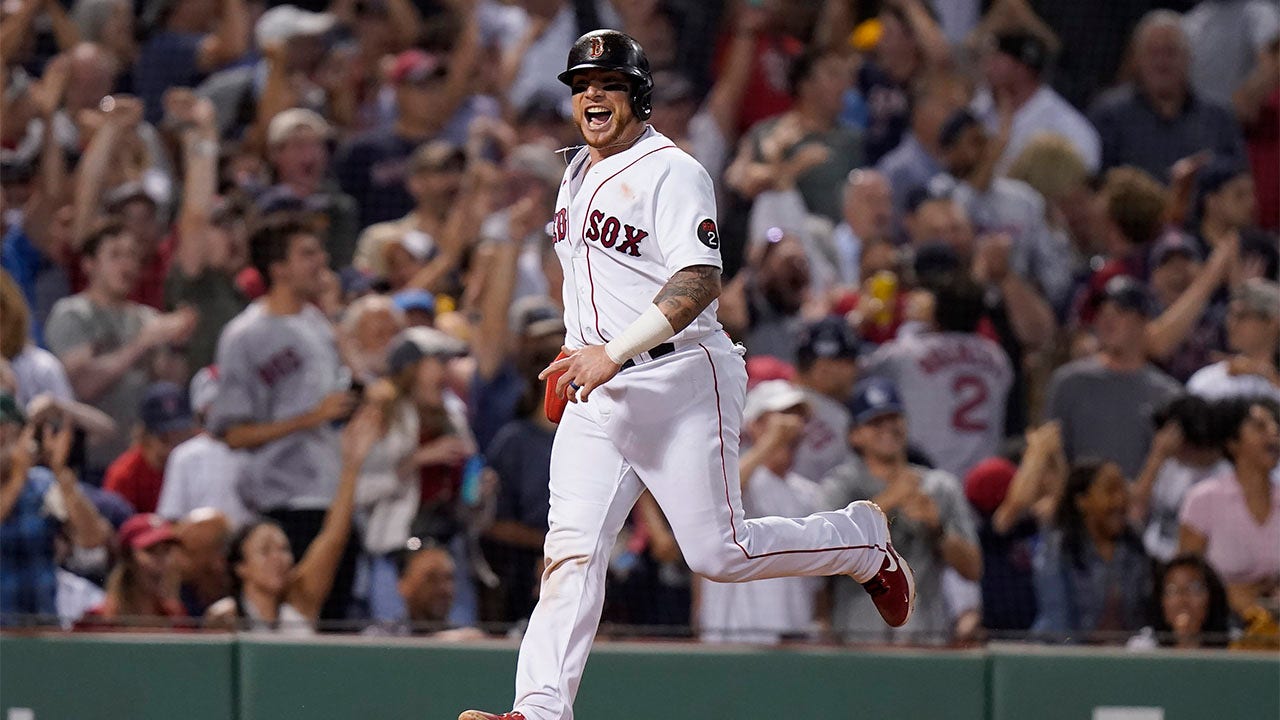 The Boston Red Sox lost every one of their first eight series against AL East opponents this season. In the ninth, a four-game set against the first-place Yankees, they opened with back-to-back losses and trailed by two runs in the 10th inning of Game 3.

That’s when things turned around.

Boston Red Sox’s Christian Vazquez celebrates as he arrives at home plate to score on a two-run home run hit by J.D. Martinez in the fifth inning of a baseball game against the New York Yankees, Sunday, July 10, 2022, in Boston.
(AP Photo/Steven Senne)

One night after rallying to win in extra innings, Boston scored nine unanswered runs on Sunday to come back from a four-run deficit and beat New York 11-6. The split improved the Red Sox to 0-8-1 in series against AL East teams — not great, but a boost as they head into the All-Star break with series against the Rays and Yankees.

“I don’t think anyone would have bet that we would have split it after the first two. You’re definitely lying if you say that,” said shortstop Xander Bogaerts, who was added to the AL roster for the All-Star Game earlier Sunday.

“Especially how the first two games went,” he said, alluding to the 12-5 loss on Friday in which outfielder Jackie Bradley Jr. pitched the ninth. “It’s nice to give the fans something to come back to the ballpark and look forward to.”

Jeter Downs’ bases-loaded blooper against Aroldis Chapman dropped in off DJ LeMahieu’s glove to break a sixth-inning tie, and the Red Sox rallied from a 6-2 deficit to win on Sunday night. Boston scored one in the third, three in the fifth to tie it, one in the sixth to take the lead and four insurance runs in the seventh.

It was the second straight comeback sparked by Downs, a 23-year-old rookie named after former Yankees shortstop Derek Jeter who was supposed to start in Triple-A on Saturday but was scratched so he could head to Fenway Park.

“We play in a tough division, and we’ve been getting beat in the division and we know that,” Red Sox manager Alex Cora said. “But we feel like we can play with anybody.”

J.D. Martinez hit a two-run homer to make it 6-all in the fifth, and Franchy Cordero and Christian Vazquez also homered.

Giancarlo Stanton and Matt Carpenter homered for the Yankees, who scored two runs off Boston starter Nick Pivetta in each of the first three innings to open a 6-2 lead.

Vazquez hit a solo homer in the bottom of the third, then doubled home a run in the fifth; Martinez hit the next pitch out to right-center to tie it 6-all. Chapman (0-3), who returned from the Injured List earlier this month, loaded the bases in the sixth on a single and two walks.

Downs pinch hit for Jarren Duran and blooped one toward center field. LeMahieu went back on it from second base and Aaron Hicks came in from center, but the ball glanced off LeMahieu’s glove and fell in.

Trevor Story scored from third to make it 7-6 but Rob Refsnyder, who held up at first, was forced out at second.

“Everybody talks about the bullpen, how great they are, and we saw the window there,” said Cora, who used two pinch hitters in the inning against Chapman. “We have to go for it there.”

Boston added four more in the seventh, loading the bases on an error, a walk and a single before Story doubled high off the Green Monster in left-center to clear the bases. Albert Abreu replaced Miguel Castro and committed a throwing error on Cordero’s bunt, allowing Story to score from second and make it 10-6.

Chapman was charged with one run on one hit and two walks, striking out two in one inning. Hirokazu Sawamura (1-1) struck out two in two innings for Boston, which is in second place in the AL East — but 14 games behind the Yankees.

Yankees manager Aaron Boone was ejected by plate umpire Tripp Gibson in the middle of the seventh. Boone came out to argue, animatedly, after Sawamura struck out Stanton looking to end the top half of the inning.

The Red Sox have two players headed to Dodger Stadium for the game on July 19: Bogaerts was added as a reserve, and third baseman Rafael Devers was elected as a starter.

Yankees: New York starter Jameson Taillon took a hard chopper from Vazquez off his right hip in the first inning, recovered and made the play at first. Taillon remained in the game.

Red Sox: Devers missed the last two games of the series with back pain. … RHP Nathan Eovaldi pitched three-plus innings for the Triple-A Worcester Red Sox on a rehab assignment, allowing two runs on five hits and striking out four. He has been on the injured list since June 12 with lower back inflammation.

Yankees: After taking Monday off, host Cincinnati for the start of a three-game series Tuesday. Cole (8-2) will face Reds RHP Graham Ashcraft (4-2).