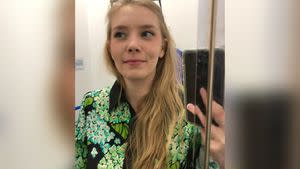 A Georgia woman was left paralyzed after a visit to her chiropractor last month, according to her family.

Caitlin Jensen, 28, graduated from Georgia Southern University in May with a master’s degree in Chemistry and Biology.

On June 16, she visited a chiropractor in Savannah for an adjustment to her neck. Soon afterwards, she got sick and was rushed to the emergency room, WJCL reports.

“That morning we were up and talking to her before work. You’re talking to her and then 30 minutes later, she’s in the hospital and now in the ICU,” her brother, Caleb Johnson, told WJCL.

Tests revealed four dissected arteries in Jensen’s neck. The damage led to cardiac arrest and traumatic brain injury. It’s unclear if Jensen’s injury occurred before or during the appointment with her chiropractor.

Channel 2 Action News spoke with Darlene Jensen, Caitlin’s mother, who said her daughter’s doctors believe the injury was a direct result of the neck adjustment.

“The surgeon that performed the surgeon on her that saved her life, and every other doctor that has looked at her, have all agreed that this happened as a direct result of the neck manipulation,” Jensen said. “The chiropractor called 911 and then called me and told me that she was ‘having a reaction to the treatment.’”

WJCL reached out to the chiropractor for comment, but they cited HIPPA privacy laws. The cause of Caitlyn’s injury has not been officially determined. The family has retained legal counsel on Caitlin’s behalf.

Doctors were able to revive Jensen and she as rushed into surgery, where doctors repaired some of the tears and placed a stent in one of her arteries.

“Caitlin is currently conscious and able to respond to verbal commands by blinking her eyes, as well as wiggling her the toes of her left foot,” family members said on a GoFundMe set up to help with her medical expenses. “However, the rest of her body sits in a state of paralysis due to the injury.”

“Those dissections will often produce symptoms of headache and neck pain, which then drive people to a doctor’s office,” Ranicki said. “Once they’ve gone to the medical doctor or chiropractor, the likelihood is, unfortunately, a stroke will occur.”

Ranicki said that similar injuries can happen to people who go to a salon, though it is extremely rare.

Jensen can now squeeze people’s hands, wiggle her toes and nod her head, according to her family.

“It’s truly remarkable that she is alive. I am shaken to the depth of my being by this experience,” Jensen’s mother, Darlene, wrote on the GoFundMe. “When I look at my baby girl laying there, and she has the ability to look back at me, to see life in her eyes, to touch her and talk to her. She’s ALIVE. Hallelujah.”

The family hopes to get Jensen admitted to the Shepherd Center in Atlanta to further her rehabilitation.

“She’s going to need a lot of help and we appreciate everyone’s generosity,” Darlene Jensen told Channel 2 Action News. “The world is full of good people.”

So far, the community has raised more than $31,000 to help with Jensen’s medical bills via the GoFundMe account.