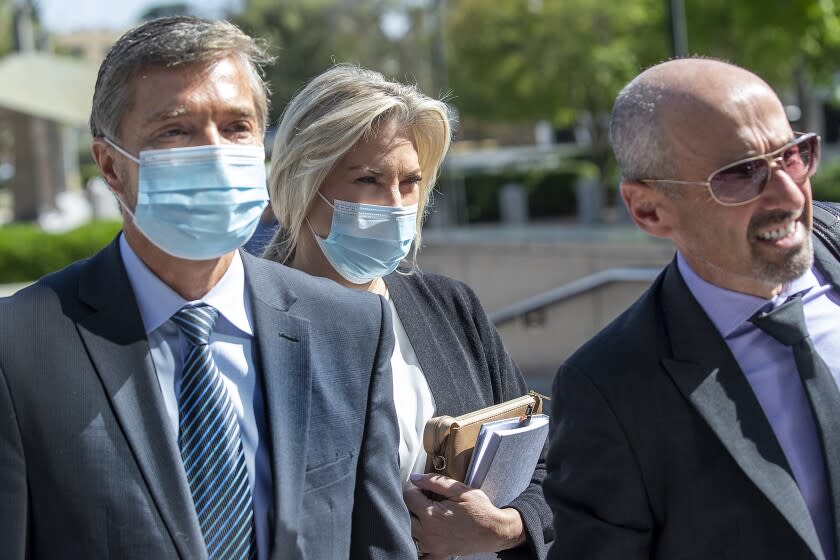 Rebecca Grossman was tailing a friend’s SUV and driving as fast as 81 mph on a Westlake Village road before she fatally hit two young brothers in a crosswalk, witnesses testified Tuesday.

After striking the boys, sending one child flying into the air, she braked for only a second but did not stop, according to the testimony.

On the second day of a hearing to determine whether Grossman, 58, should stand trial in the deaths of Jacob and Mark Iskander, ages 8 and 11, on Sept. 29, 2020, two eyewitnesses described how her SUV plowed through the crosswalk on Triunfo Canyon Road. The boys were walking with their family at about 7:10 p.m. and crossing a three-way intersection with a marked crosswalk but no stoplight.

A crash expert also testified that had Grossman slowed from 73 mph — her speed about 550 feet from the crosswalk — to the posted limit of 45 mph, she would not have hit the children because they would have already been at the curb.

“If the car had been going the speed limit for five seconds, there would be no collision,” testified Michael Hale, a veteran collision investigator with the Orange County district attorney’s office.

He testified that data extracted from Grossman’s Mercedes-Benz showed that she was flooring the gas pedal and reached 81 mph about 1.5 seconds before the crash. He said the data showed she then lightly tapped on the brakes for a second, reducing her speed to 73 mph, and took her foot off the gas before she hit the boys.

Yasamin Eftekhari described seeing the two SUVs in her car’s side mirror, passing at high speed and then tapping on their brakes immediately before the crosswalk. Grossman’s white Mercedes was unable to avoid the boys.

“There was a family walking in the road. The white car struck the two kids in the road,” Eftekhari said. She said the vehicle hit its brakes right before hitting the boys and then again after the impact.

“The first child to get hit, he was up against the side [of the road]. I didn’t see the second child get hit,” Eftekhari testified. She said she stopped her car and dashed toward the surviving 5-year-old boy near the curb with his mother, who grabbed him and dived out of the way. “I went and picked him up,” she said, wiping tears from her face.

She said she tried to distract the boy, Zachary, from the scene. His mother, Nancy Iskander, “was crying and screaming,” Eftekhari testified.

Grossman, the 58-year-old co-founder of the Grossman Burn Center with her husband, Dr. Peter Grossman, is charged with two counts of murder, two counts of vehicular manslaughter with gross negligence, and one count of hit-and-run driving resulting in death in connection with the crash. Grossman faces 34 years to life in prison if convicted. She has pleaded not guilty and is out on $2-million bail.

To get a second-degree murder conviction, prosecutors must prove Grossman acted with implied malice and knew the act of driving at a speed of more than 70 mph in a residential area was dangerous to human life. Prosecutors said Grossman’s history of speeding and warnings she received were a form of notice; she has two prior speeding tickets on a nearby freeway a decade ago and that same year on Kanan Road in Malibu.

Emotions again ran high on the second day of the preliminary hearing, with several breaks as tears flowed with Eftekhari on the witness stand. “This is one of the most difficult cases I have been involved in,” Los Angeles County Superior Court Judge Shellie Samuels said.

Jake Sands, who was in Eftekhari’s front passenger seat, said Grossman’s Mercedes and a black SUV driven by former Dodger Scott Erickson came up behind them “going fast, above the speed limit, freeway speed or maybe faster.”

He said Erickson’s SUV passed them first, switching to the left lane, followed by Grossman’s white SUV. Sands said they were about three feet apart.

As the SUVs passed, Sands said he saw the three boys and their mother in the crosswalk ahead, crossing toward the lake. They were on roller blades, a skateboard and a scooter.

He said as the black SUV approached the family first, the driver tapped his brakes. “It swerved and avoided the family right before,” he testified.

Grossman’s Mercedes 430 GLE was just behind, and the driver “tapped on their brakes” and then drove through the crosswalk, Sands testified.

Sands said he heard the sound of a crash and saw the boy who had been thrown into the air, Jacob, fall to the ground in the bicycle lane near the right curb.

Sands said he saw the other boy, Mark, farther down the road near the median. After impact, he testified, the white Mercedes’ brake lights went on again, but it did not stop.

During cross-examination, lawyers for Grossman repeatedly attempted to portray Erickson’s car as blocking Grossman’s view of the family in the crosswalk ahead.

Grossman’s lawyers have argued she never left the scene and stopped farther down the road, but Deputy Dist. Atty Ryan Gould repeatedly got the two eyewitnesses to say she did not stop near the scene.

Eftekhari said that after the boys were hit, Grossman’s SUV braked “for a split-second” but continued to drive down the street.

Hale, the crash expert, said Grossman’s Mercedes cuts off the fuel to the engine after a crash, which would eventually force the driver to stop. Such a fuel cut-off prevents fire and still allows braking.