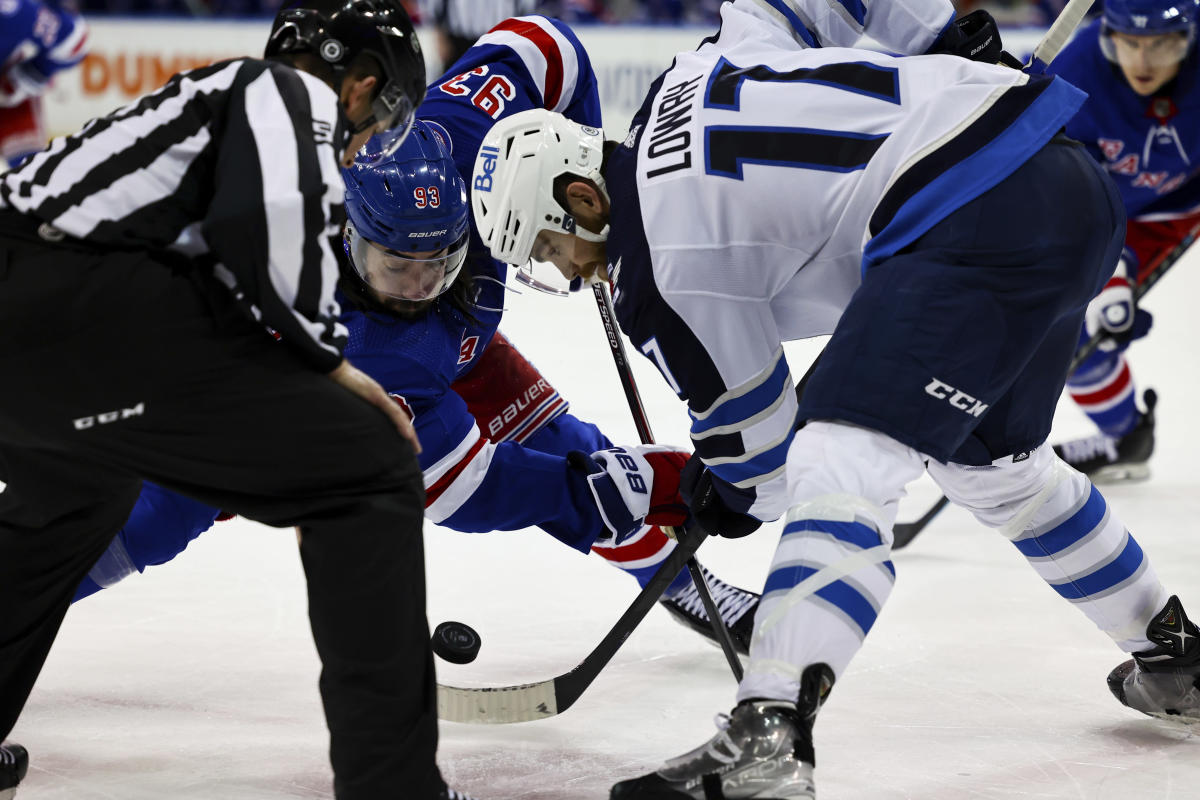 NEW YORK (AP) — Ryan Strome scored twice, Adam Fox added a goal and Igor Shesterkin made 31 saves as the New York Rangers recorded a third-straight shutout and their 50th win of the season, 3-0 over the Winnipeg Jets on Tuesday night.

Eric Comrie made 31 saves for the Jets, who were officially eliminated post-season contention with the loss.

After a scoreless first period, Strome broke through on the power play against Comrie at 15:57 of the second. Assists went to Mika Zibanejad and Artemi Panarin. Zibanejad has a career-high 50 assists and 78 points.

Fox scored his 11th of the season at 11:47 of the third, with assists to Panarin and former Jets forward Andrew Copp.

Panarin has points in seven of his last eight games and a career-best 70 assists.

Strome added an empty-net goal — his 19th — at 19:27 to complete the scoring, with assists to Chris Kriender and Copp, who has points (five goals, 10 assists) in 12 of his 14 games with New York since being acquired from Winnipeg on March 21.

Shesterkin was stellar from the start, making six saves in the first, 12 in the second and 13 in the third. The shutout was his second straight and sixth of the season. He also blanked Detroit 4-0 on Saturday after backup Alexandar Georgiev stopped Philadelphia 4-0 on April 13.

Shesterkin’s best save was a point-blank right arm stop on Jets captain Blake Wheeler at 17:23 of the middle period. He also denied Nikolaj Ehlers with just over five minutes left in the third to preserve the shutout. The 26-year-old Russian netminder improved to 36-11-4.

The Rangers haven’t allowed a goal since an empty-net score with six seconds left in the third period of a 4-2 home loss to Carolina last Tuesday.

With the victory, the Rangers moved into a first-place tie with idle Carolina with 106 points atop the Metropolitan Division. Both teams have five games remaining, including another meeting at Madison Square Garden next Tuesday.

The Rangers are 7-2-1 in their last 10 games against Winnipeg. They also beat the Jets 4-1 in Winnipeg on March 6. The contest was the first Garden visit for the Jets since Oct. 3, 2019, a 6-4 win for the Rangers in that season’s home opener.

The Rangers improved to 26-8-4 at Madison Square Garden and 9-3-1 in their last 13 home games. New York has allowed just 83 goals at home, second-fewest in the league behind Carolina’s 82.

They have permitted one or fewer goals in six of their last seven contests, including three shutouts. Shesterkin also blanked Pittsburgh 3-0 at home on April 7.