Putin, Looking for Allies, Plans to Meet Leaders of Turkey and Iran 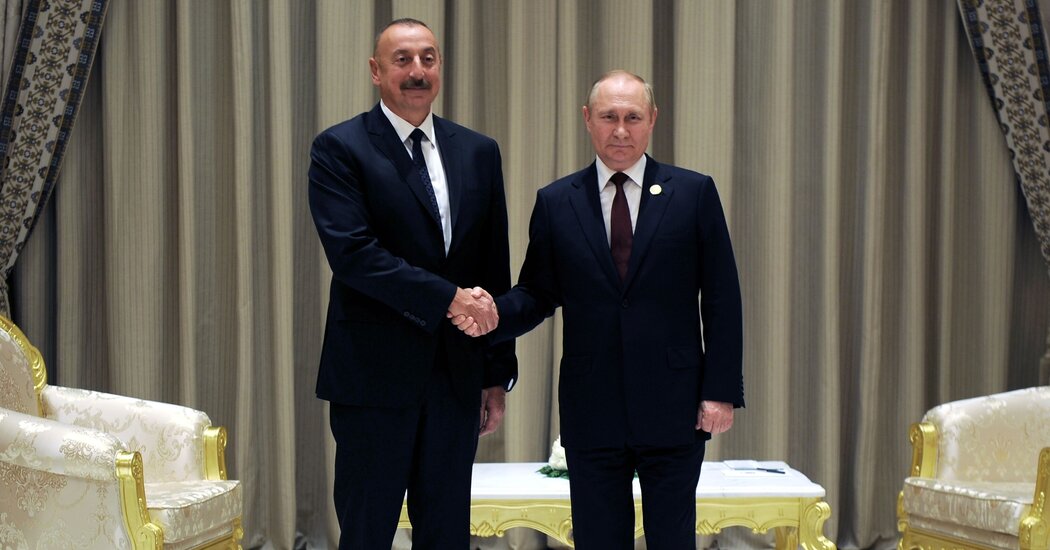 In his first trip abroad since Russia invaded Ukraine, President Vladimir V. Putin, having recently compared himself to Peter the Great, held court among his close allies in Central Asia and insisted that the war was going according to plan.

His second trip, announced by the Kremlin on Tuesday, will take him into far more difficult diplomatic terrain: meetings next week in Tehran with the leaders of Iran and Turkey, two nations sometimes aligned and sometimes sharply at odds with Russia and with each other.

The meetings, if they go well for Mr. Putin, represent an opportunity to shore up military and economic backing to counter the West’s military assistance to Ukraine and its sanctions against Russia.

While high fuel prices have buoyed Russia’s revenues and it has been emboldened by gradual military gains in Ukraine, Western sanctions have wounded its economy and restricted its ability to build or buy technology for military use.

According to the White House, Russia is seeking hundreds of drones from Iran, including those capable of firing missiles, and analysts say that Iran could offer Russia a critical trade route and expertise in circumventing sanctions and exporting oil.

Russia’s military has seized control of much of the eastern Donbas region of Ukraine, at a fearful cost in destruction and casualties on both sides. It has put the advance temporarily on hold while trying to regroup battered units, but continues to pound Ukrainian targets with shells, rockets and missiles.

Next week in Tehran, the Iranian capital, Mr. Putin will meet jointly and separately with President Ebrahim Raisi of Iran and President Recep Tayyip Erdogan of Turkey, the Kremlin spokesman, Dmitri S. Peskov, told reporters on Tuesday. Mr. Peskov said the leaders would discuss peace talks on Syria, a decade-old conflict in which Iran and Russia have backed the government and Turkey has supported an opposing rebel faction.

Syria is just one sticking point between Iran and Turkey, each of which could help Mr. Putin circumvent Western measures or drive wedges between the countries that united to support Ukraine. Mr. Putin’s diplomatic push will also seek to counter efforts this week by President Biden, as he travels to the Middle East to meet the leaders of Saudi Arabia and other Gulf States.

Mr. Erdogan has for years proved a prickly ally for NATO, sometimes working in tandem with other member states but often pursuing his own agenda even when it disrupts Western consensus. He has grown closer to Mr. Putin in recent years, and briefly objected to Sweden and Finland joining NATO over the quest for autonomy by ethnic Kurds in Turkey and neighboring countries.

But Turkey, which shares the Black Sea coast with both Russia and Ukraine, has emerged as possibly the most active mediator between Mr. Putin and President Volodymyr Zelensky of Ukraine. Early in the war, Mr. Erdogan hosted meetings between delegations from each country, and since those negotiations stalled he has pursued talks about lifting a Russian blockade to get Ukraine’s grain exports into global markets, where they could alleviate a food crisis.

Iran and Russia have long had cordial relations, often sharing a common interest in confronting the West. At the same time, Moscow tried to maintain relationships with Iran’s regional enemies, Israel and some Arab countries.

But that balance shifted this year, as the pressure of Western sanctions against Russia, and tensions related to the war and oil, appear to have made ties with Tehran a higher priority for Moscow and the two have drawn closer.

Mr. Putin met with Iran’s president, Mr. Raisi, on the sidelines of a regional summit in Turkmenistan last month, and spoke with him on the phone in early June, according to the Kremlin.

“Our relationship is of a truly deep, strategic character,” Mr. Putin told Mr. Raisi in Turkmenistan, noting that trade between the two countries was up 81 percent last year.

At a summit meeting in Uzbekistan in September, Iran is expected to join a multilateral security group, the Shanghai Cooperation Organization, which already includes Russia and China.

Sergey V. Lavrov, the Russian foreign minister, last month praised Iran’s accession as a step that would strengthen the organization “as one of the key centers of the emerging multipolar world order,” diluting the global influence of the United States.

But despite their common cause, relations between Russia and Iran could be strained by simple competition for the oil sales that dominate both nations’ economies.

Iran and Venezuela, a longtime Kremlin ally, have long operated under harsh Western sanctions, forcing them to rely heavily on oil sales to Asia, particularly China. Now sanctions are driving Russia toward the same markets, fighting for sales to Asia. Analysts say the competition has already forced Iran and Venezuela to sharply discount their crude to hold on to buyers.

The Kremlin may see talks in Tehran as a chance to smooth over relations, especially if it wants help evading the kind of sanctions Iran has faced for years. Iranian officials have openly called themselves experts in navigating economic sanctions imposed by the United States, and could share their strategies with Russia.

“Iranians have plenty of experience and channels they have used to circumvent sanctions, and they can provide corridors for Russian goods to travel through Iran to other places,” said Ali Vaez, the Iran project director at the International Crisis Group. “This is all beneficial to Russia.”

Western officials say it is not clear to what extent Iran supports Russia’s military campaign, but Mr. Putin may also come in search of specialized technology to help his armed forces. Although Russia maintains an overwhelming advantage in artillery and ammunition — using it to devastating effect on military and civilian targets alike — it has struggled with reconnaissance that would enable more precise strikes.

Spy and combat drones could help make up that shortfall. Advanced drones supplied by Turkey were crucial to Azerbaijan’s victory over Armenia in their 2020 war.

On Monday night, for instance, Ukrainian forces fighting to recapture territory said they blew up a Russian ammunition depot in the southern Kherson region. Officials loyal to Moscow said one of the HIMARS performed the strike and that it hit a warehouse containing saltpeter, causing a large explosion. Neither claim could be verified Tuesday.

Mr. Biden’s national security adviser, Jake Sullivan, said U.S. officials did not know whether Iran had already sent any drones to Russia. Mr. Sullivan said that Russia’s monthslong bombardment had exhausted its supply of precision-guided weapons, and seemed to suggest that the Kremlin was, or soon would be, running short on armed surveillance drones, or unmanned aerial vehicles.

“Our information indicates that the Iranian government is preparing to provide Russia with up to several hundred U.A.V.s, including weapons-capable U.A.V.s, on an expedited timeline,” Mr. Sullivan told reporters at the White House.

He added that the United States had information that indicated that Iran was preparing to train Russian troops to use the drones as soon as this month.

Responding to those remarks, Nasser Kanani, a spokesman for Iran’s Foreign Ministry, said on Tuesday that cooperation between Iran and Russia “in the area of new technology dates back to before the Ukraine war.” He added, “There has been no particular development at this current time.”