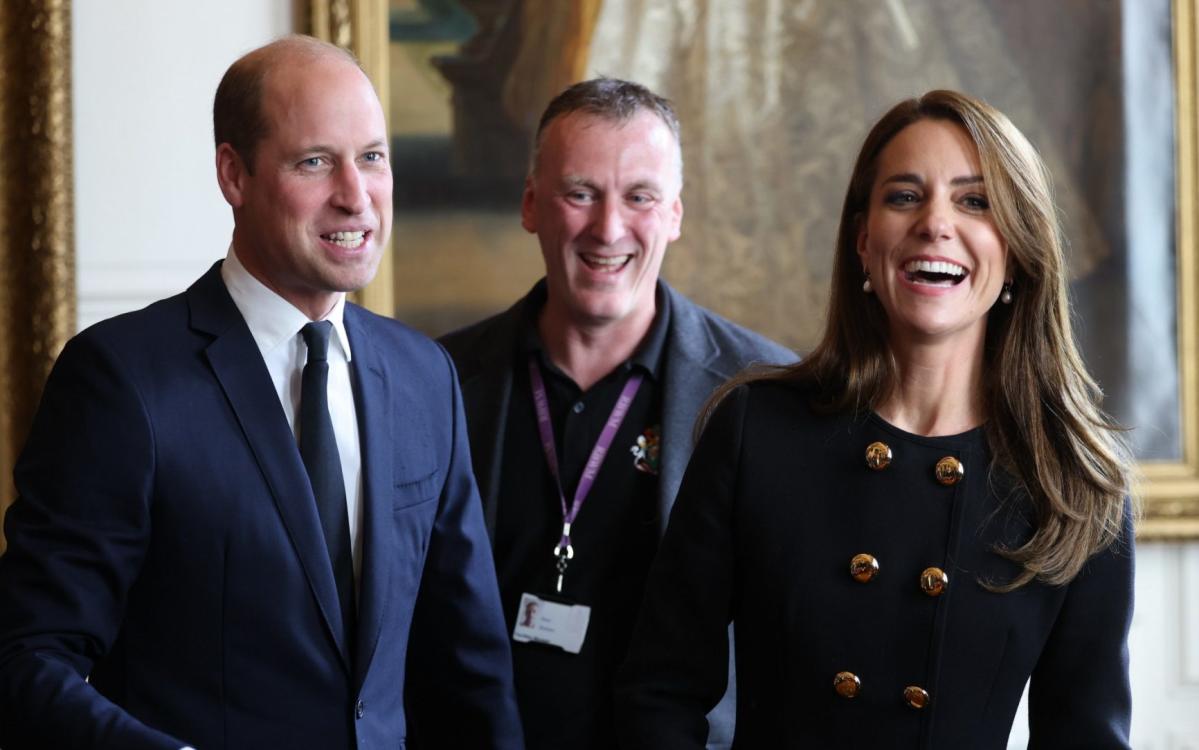 The Prince and Princess of Wales have spoken movingly of how Queen Elizabeth II is “looking down” on them, after rainbows appeared above Balmoral shortly after she died.

On Thursday, the couple visited the unsung heroes who helped stage the late monarch’s funeral in Windsor.

They gave a moving insight into the Royal family’s conversations about their late grandmother – from the difference the public outpouring had meant to their own grieving process, to the unusual weather.

The couple told volunteers their “seamless” operation in Windsor had made it an “extraordinary” experience for the Royal family and the public.

The Prince and Princess arranged to meet dozens of those responsible for the major public operation, from the man who arranged the portable toilets to the people moving the flowers and organising the bin collections.

They said they were deeply grateful for the 24-hour a day operations that ran between the late Queen’s death and the end of her funeral.

During an hour-long engagement at the Windsor Guildhall, they spent time with St John’s Ambulance crew, Crown Estate staff, council workers and volunteers to hear how the logistics had worked.

They also gave a moving behind the scenes insight into the Royal family, from the Wales children spotting preparations for the funeral on their school run to cherished memories of conversations with the late Queen.

The Prince also said the unusual sight of five rainbows above Balmoral after her death on Sept 8 had left them astonished.

“In Scotland, how many rainbows turned up?” he asked the Princess. “You hardly ever see rainbows up there, but there were five.”

Smiling at him, the Princess said: “Her Majesty was looking down on us.”

The family enjoy part of their summer holidays at Balmoral each year, and are known to have spent time with the late Queen there in her final weeks.

As news of the late Queen’s health emerged, the Princess remained in Windsor to support their children while the Prince flew to Balmoral, adding it had been “extraordinary weather”. “Right at the end of the day, the heavens opened,” she said.

The Prince reminisced about his family’s own conversations about the late Queen since she had died.

“We were saying the other day, the Queen said she had never been rained on at the Cenotaph in 70 years,” he said. “So we will see what happens this year.”

The couple also spoke of how they had marvelled at the funeral preparations whilst on the school run from their new home in Windsor.

“When we’ve been doing the school run, we’ve been able to see the preparations going up. We’ve seen it growing,” said the Princess.

“It must have been quite a mission.

“Having gone backwards and forwards last week, we could see it slowly growing. It seemed so well organised.”

She added that Prince George, Princess Charlotte and Prince Louis had been particularly “beady-eyed”, asking why there were drones flying around for security.

Asked whether the family had heard any of the 3am rehearsals for the ceremonial elements of the funeral, the Princess said: “We didn’t hear it, I would have loved to though.”

The Prince, careful not to specify which children, added: “Some of the children in the family woke up and they thought, are we hearing things?”

The Princess called the “footage and imagery” from the day of the funeral “extraordinary”, marvelling at how “different generations from all walks of life” had come out for the late Queen.

“It was amazing how everyone seemed to want to come,” she said. “Reading some of the messages, the Queen had a personal relationship with every one of these people.

“The messages that were left show the Queen had a special meaning to everybody.”

The couple have been out to view flowers in Windsor, where they were joined by the Duke and Duchess of Sussex, and Sandringham.

Of the messages included with the flowers, he said: “We tried to read as much as we could but some were like essays, it was incredible. The children’s ones were very special to me.

“It’s the things you don’t expect that get you. Paddington got me quite choked up.”

He went on to joke that there had become “a bit of competition” between the corgis and Paddington over which is now most associated with the late Queen. However, he suggested that he would side with the corgis if pushed to choose.

“The corgis and Paddington were in competition, at loggerheads!” he said. “Paddington is a new addition, the corgis have been there longer.”

He and the Princess were shown a photograph of the Peruvian bear made entirely of flowers, which had been spotted in Windsor.

Of the number of real marmalade sandwiches left, the Princess joked: “The squirrels probably enjoyed it too.”

The Royal family, William said, had been “all quite worried that everyone coming here could lock the whole town down and come to a standstill”, causing “disruption for everybody”.

The Waleses were personally grateful that they could “still get the children to and from school”, said Kate.

The couple asked repeatedly after the welfare of volunteers, saying they hoped they would now take some time off to rest.

“You guys have been doing such long hours,” said the Prince.

Of all their hard work, the Prince said: “It was seamless, you could feel it.

“It couldn’t have gone the way it did without your help. We really appreciate all the hard work and long hours, so thank you.

“It made us feel like people care. We were sharing it with everyone else, which made it less hard.

“It’s been a busy week for everyone. It showed how hard people behind the scenes have been working.”

The Princess added: “You can be so proud of it. It was extraordinary from the family’s perspective, but also for the public.

“All these different things like car parking and logistics. We couldn’t believe how far people had come.”

Touching on their theme of mental health, the Princess also asked one group how they are managed with “such long hours and so much effort”.

“How are you emotionally?” she said. “It must have been physically tiring, but also emotionally.”

Her husband said: “You’ve all been brilliant. It was very slick. The public don’t see all this hard work but we really appreciate all the hours you’ve put in.”

When it was time for the couple to leave, several people thanked them for taking the time to come in person to express their gratitude.

“It’s the least we could do,” the Princess told them. “We should have been there volunteering.”

Having already deflected any praise, the Prince said of their presence: “I think we would have added to their problems.”

An estimated 102,500 people visited Windsor on the day of the Queen’s funeral, with around 100,000 bunches of flowers left in her memory.

Another 850 portable toilets were provided for visitors’ comfort, along with 5,000 extra car parking spaces and 200 bins.

Nearly 98 “ambassadors” and 1,000 stewards worked to help the public find their way through the town and stay safe.

The Prince and Princess of Wales were hosted by Graham Barker, the vice Lord Lieutenant, and Andrew Scott, the council’s lead planner for royal funerals.

Those attending were arranged into six horseshoe-shaped groups to speak to the royals – one each for uniformed ambassadors, infrastructure, council, logistics, transport and the Crown Estate.

Among them were the men responsible for the portable loos and bins, those who worked around the clock transferring flowers to the Long Walk and the woman who delivered announcements over the loudspeakers, as well as those who arranged car parking, road closures, barriers and the food, IT and stationery for everyone involved in the planning.