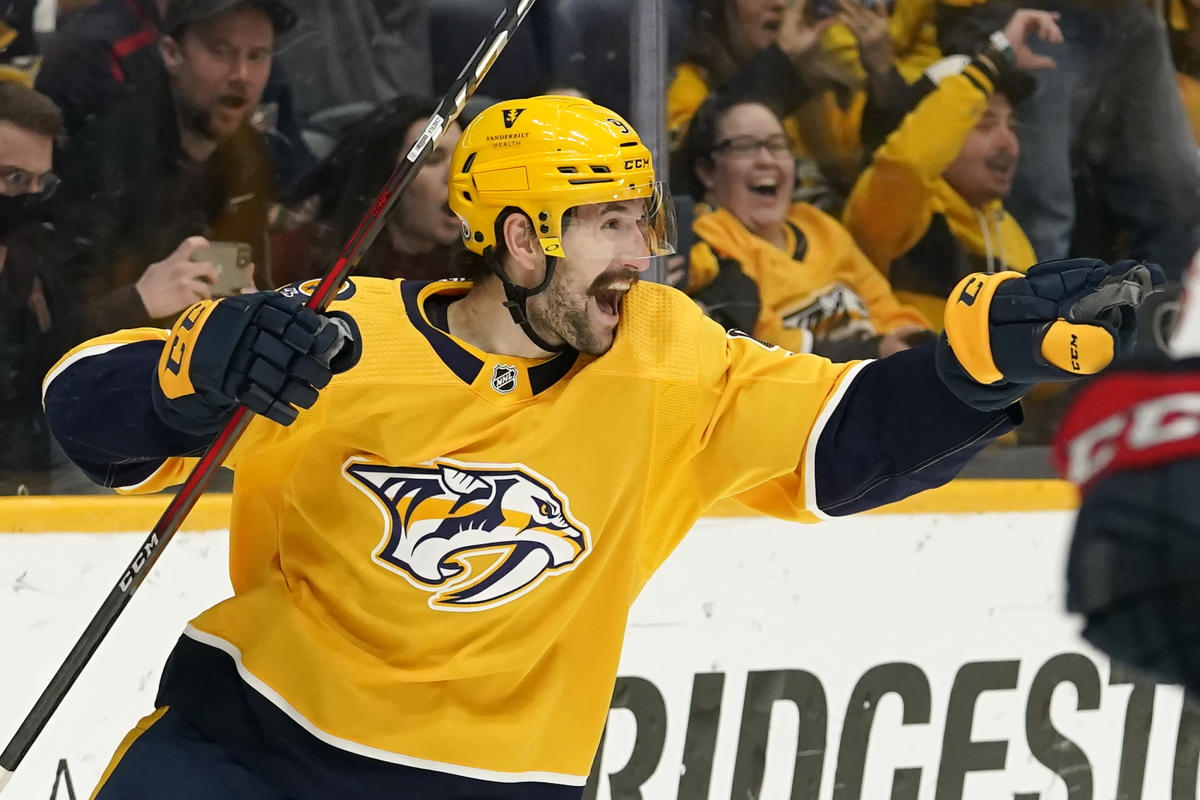 Confronted by the harsh reality of the Tampa Bay Lightning moving on from him and with memories still fresh of being on the wrong side of the Stanley Cup championship handshake line, Ryan McDonagh approved a trade to the Nashville Predators.

The Predators also lost to the Stanley Cup champion Colorado Avalanche when they were swept out of the first round. In adding McDonagh and re-signing Filip Forsberg, Nashville hopes it’s beginning to close the gap on Colorado.

“We did get beat by Colorado, the team that won the Stanley Cup, so that’s in our conference — that’s our measuring stick,” general manager David Poile said Monday. “No false illusions: We have still a ways to go, but I do feel today that a year older for a lot of the younger players and adding McDonagh, I think we’re going in the right direction.”

Nashville is not the only team with that measuring stick in mind. The Edmonton Oilers, swept by the Avalanche in the conference final, Minnesota Wild and others around the West are chasing the champs by making moves even before free agency begins.

The Oilers gave up draft picks to clear salary cap space in an effort to re-sign scoring winger Evander Kane, even while giving his agent permission to talk to rival clubs. The Wild re-signed Marc-Andre Fleury to give them one of the NHL’s top goaltending duos. And even some emerging contenders such as the Los Angeles Kings extended some young players who could help them follow in Colorado’s path.

“Obviously it’s difficult” to stay on top, said Avalanche president of hockey operations Joe Sakic, who was promoted after winning GM of the year honors. “Everybody’s dream is to win the Stanley Cup, and now we’re the Stanley Cup champions, so we’re going to get everybody’s best game.”

Their next game isn’t until Oct. 12, and those challenges already are beginning, amid the Avalanche re-signing winger Valeri Nichushkin to a $49 million, eight-year deal.

Nashville bulked up on the blue line with McDonagh, who won two consecutive Cups with Tampa Bay and has never missed the playoffs in his 12-year NHL career. The veteran defenseman known for his toughness essentially had his choice of destinations because of trade protection in his contract and would not have picked the Predators if he didn’t think they could get to the top.

“It was right away a big point for me to realize that this group was competitive and has all the pieces that I believe you need to win a Cup,” McDonagh said. “You want to always be contending, making the playoffs and going on deep runs, and this team has it all.”

Forsberg saw the same things before deciding to sign a contract that counts $8.5 million against the salary cap through 2030. The deal takes the Swedish winger through his prime years and represents an investment in bringing the Cup to Nashville for the first time.

“The only thing we’re missing is the Stanley Cup, and that’s the main driver for all of us,” Forsberg said. “We’ve been close. We’ve had a really good team. I’ve been lucky enough, played on a lot of really good teams here, but we still haven’t taken that final step.”

The Predators certainly are not alone in that department. It has been more than three decades since the Oilers won it all, and they got a taste of a deep playoff run this spring before getting swept by Colorado.

At the draft last week, Edmonton traded a first-round pick and more to Arizona to offload forward Zack Kassian’s contract and provide some cap flexibility. New contracts for young restricted free agent wingers Kailer Yamomoto and Jesse Puljujarvi are at the top of that list, along with potentially finding common ground with Kane, who was a great fit alongside either Connor McDavid or Leon Draisaitl.

“There’s so many things,” GM Ken Holland said. “We’ve got to make a decision in goal. That’s where the cap space is going: one or two of (those) places.”

Kane’s agent, Daniel Milstein, confirmed to The Associated Press that he is opening talks with other teams while continuing discussions with the Oilers, with his client eligible to become an unrestricted free agent on Wednesday.

Potentially complicating the situation is Kane’s outstanding grievance over the San Jose Sharks’ termination of his contract earlier this season, which almost certainly won’t be resolved in the next three days.

One thing that was resolved was Minnesota’s goaltending situation, after the Wild re-signed three-time Cup-winner Marc-Andre Fleury for two years at $7 million. They are set to again pair Fleury with Cam Talbot, which was a successful recipe for the final six weeks last season.

“To have Marc-Andre Fleury and Cam Talbot as a 1-2 punch, I think we have one of the top tandems in the league,” GM Bill Guerin said. “Every night we’re going to put a fantastic goalie in net.”

With the Avalanche turning to a bit of an unknown quantity in 26-year-old Alexandar Georgiev and moving on from Darcy Kuemper, Minnesota hopes to have enough in net to get through a long regular season and make a deep playoff run.

“I go into every season looking to make the playoffs and go from there,” Fleury said. “I don’t think it’s a good thing to look too far ahead, but definitely our goal is always to make it to the end.”

To do so, the Wild will have to go through the Avalanche — or one of the other teams in the West loading up for the same reasons.