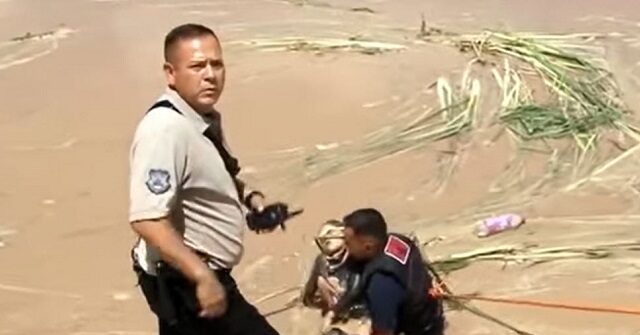 EAGLE PASS, Texas — An infant migrant died Thursday after Border Patrol agents pulled his lifeless body from the Rio Grande on Monday. His drowning death adds to the deaths of his three-year-old brother and a five-year-old girl in separate incidents on Monday.

A source operating under the umbrella of U.S. Customs and Border Protection told Breitbart Texas that the three-month-old boy pulled from the Rio Grande on Monday died on Thursday from his injuries. The agents also pulled a three-year-old from the river during the same crossing incident. Agents could not revive the toddler, Breitbart Texas reported.

Also on Monday, the swiftly moving current of the Rio Grande near El Paso ripped a five-year-old girl from her mother who was trying to cross the Rio Grande. The mother and daughter crossed with a larger group of migrants, KVIA ABC7 reported.

Video from a Mexican television station captured the moment a firefighter pulled the little girl’s body from the water as she floated downstream.

Border Patrol agents and El Paso firefighters pulled five adults from the water — including the mother. The currents pulled the five-year-old away and she drowned.

In the Del Rio Sector, dozens of migrants drowned during the summer months — mostly near Eagle Pass. Agents report more than one drowning per day for extended periods of time.

“What you don’t see is an outcry in America — why do children have to die?” Garcia told the newspaper. He added that parents face a “personal decision” about bringing their children across the deadly waterway.

“They do it because of their children…so their children don’t grow up where they will die of hunger, poverty, or disease if they stay. Or violence,” he explained.

Earlier this month, Breitbart Texas reported more than 670 migrants died in “horrific” circumstances this year. Of the more than 670 deaths, 60 percent were drownings and exposure. Another 10 percent of the deaths were discovered but the causes were not definitive.

Bob Price serves as associate editor and senior news contributor for the Breitbart Texas-Border team. He is an original member of the Breitbart Texas team. Price is a regular panelist on Fox 26 Houston’s What’s Your Point? Sunday-morning talk show. Follow him on Twitter @BobPriceBBTX and Facebook.

Randy Clark is a 32-year veteran of the United States Border Patrol.  Prior to his retirement, he served as the Division Chief for Law Enforcement Operations, directing operations for nine Border Patrol Stations within the Del Rio, Texas, Sector. Follow him on Twitter @RandyClarkBBTX.