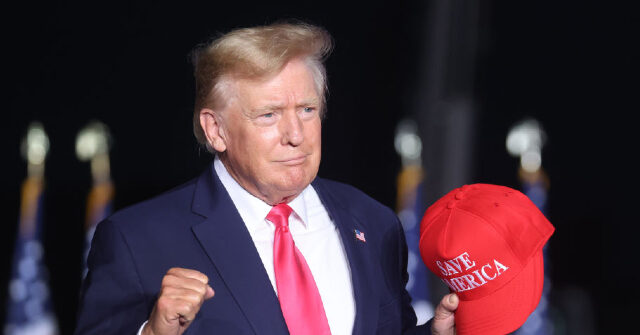 The FBI’s unprecedented raid on former President Donald Trump’s Mar-a-Lago home has no negative impact on his potential 2024 presidential bid among Republicans, an I&I/TIPP Polls survey released this week found.

The recent survey compared its figures to its last survey, taken August 2-4 — prior to the FBI’s raid. The most recent survey was taken September 7-9 — a month after the raid. However, it found that there was “little change” on questions surrounding the presidential primary from August to September, suggesting that the raid has not affected Trump’s level of support among Republican voters, many of whom condemned it.

Florida Gov. Ron DeSantis, whom the establishment media frequently likes to pit against Trump, described the raid as “another escalation in the weaponization of federal agencies against the Regime’s political opponents.”

When asked who they would support in the Republican primary, 54 percent of Republicans said Donald Trump. That is up from the 53 percent who said the same prior to the FBI’s raid of his estate.

The FBI raid does not appear to have any significant bearing on the midterm elections, either:

In September, 48% said they would prefer Congress controlled by the Democrats, compared to 46% for the Republicans. With a +/-2.9 point margin of error, that’s essentially a tossup. In August, the comparable numbers were tied, 46% to 46%.

But there are warning signs for Democrats. For one, 59% of women and 49% of men say they would prefer Republicans to control Congress, and 40% of Hispanics lean toward Republicans, compared to 52% leaning toward Democrats. While Dems still have a lead among Hispanics, that crucial demographic has become far more favorable toward Republicans in recent years.

Overall, the survey concludes that the “polls show clearly that Mar-A-Lago has done little apparent to affect how voters see the upcoming election,” adding, “If anything, it has made Trump slightly more popular.”

Trump has continued to speak about the FBI’s unprecedented raid on social media, slamming the FBI earlier this month, accusing agents of stealing his passports and medical file.

Not only did the FBI steal my Passports in the FBI Raid and Break-In of my home, Mar-a-Lago, but it has just been learned through court filings that they also improperly took my complete and highly confidential medical file and history, with all the bells and whistles (at least they’ll see that I’m very healthy, an absolutely perfect physical specimen!), plus personal Tax Records (Illegal to take), and lawyer/client/privileged information, a definite NO, NO. Days of the Soviet Union!

Trump has strongly hinted at the possibility of a 2024 run, telling supporters, “We’re going to be doing it again.”